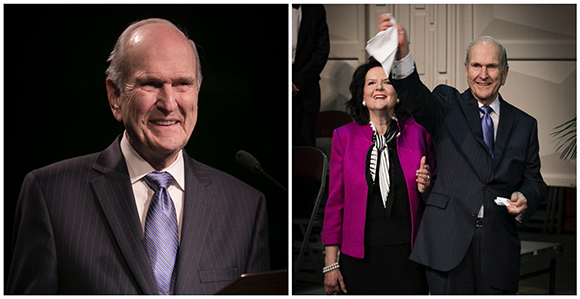 “Because you are covenant-keeping sons and daughters of God, living in the latter part of the latter days, the Lord will ask you to do difficult things. You can count on it.” —President Russell M. Nelson, President of the Quorum of the Twelve Apostles

True millennials will do “impossible things” as they understand their identity and purpose and put their trust in the Lord, President Russell M. Nelson, President of the Quorum of the Twelve Apostles, declared during a Worldwide Devotional for Young Adults broadcast on January 10.

“My beloved brothers and sisters, you were born to be ‘true millennials,’” he said. “You are a chosen generation, foredetermined by God to do a remarkable work—to help prepare the people of this world for the Second Coming of the Lord.”

Speaking to the generation referred to as “millennials,” President Nelson counseled young adults and spoke of the important role they have in moving the gospel of Jesus Christ forward.

The devotional, held in the Cannon Activities Center on the Brigham Young University–Hawaii campus in Laie, Hawaii, was translated into multiple languages and broadcast to chapels and homes throughout the world. Sister Wendy W. Nelson, President Nelson’s wife, also spoke. The BYU–Hawaii Concert Choir performed music for the live event.

“The term millennial is perfect for you if that term reminds you of who you really are and what your purpose in life really is,” President Nelson said. “A true millennial is one who was taught and did teach the gospel of Jesus Christ premortally and who made covenants with Heavenly Father there about courageous things—even morally courageous things—you would do while here on earth.”

Rather than drawing from what experts say about the millennial generation, President Nelson focused on what the Lord has said of this generation.

“A true millennial is a man or woman whom God trusted enough to send to earth during the most compelling dispensation in the history of this world,” he said.

Encouraging young adults to be morally courageous, President Nelson shared four recommendations to help them stand up and live as a “true millennial.”

Learn who you really are

First, “learn who you really are.”

President Nelson encouraged listeners to take time to think about how they are an elect son or daughter of God created in His image who was taught and prepared for everything they would encounter in their earthly existence.

“True millennials … know who they really are,” President Nelson said. “They are devout disciples of Jesus Christ who instinctively seize every opportunity to help themselves and others prepare for the millennial reign of our Savior. … I promise you that when you begin to catch even a glimpse of how your Heavenly Father sees you and what He is counting on you to do for Him, your life will never be the same.”

Expect and prepare to accomplish the impossible

Second, President Nelson encouraged listeners to expect and prepare to accomplish the impossible.

Reminding young adults that “Abrahamic tests did not stop with Abraham,” President Nelson spoke of how “God has always asked His covenant children to do difficult things.”

“Because you are covenant-keeping sons and daughters of God, living in the latter part of the latter days, the Lord will ask you to do difficult things. You can count on it.”

Recognizing that being asked to do something that seems far beyond one’s capacity can be unnerving, President Nelson encouraged listeners to accept challenging tasks and become an instrument in the Lord’s hands.

Sharing his own experience, President Nelson spoke of when he had been in the Quorum of the Twelve Apostles for only 19 months in 1985 when President Ezra Taft Benson asked him to do what he thought was impossible—open the countries of Eastern Europe for the preaching of the gospel. Although the task was not easy, and there were many obstacles in his way, President Nelson kept working until he was able to fulfill what the prophet had asked him to do.

“The Lord is able to do His own work, and I was privileged to watch the unfolding of one miracle after another—always and only after I had brought my best thinking, my most courageous efforts, and my most fervent prayers to the task,” he said.

“As a true millennial whom the Lord can count on, you will make history too!” he said. “You will be asked to accept challenging assignments and become an instrument in the Lord’s hands. And He will enable you to accomplish the impossible.”

Third, true millennials learn how to access the power of heaven.

“Every one of us has questions,” he said. “Seeking to learn, understand, and recognize truth is a vital part of our mortal experience. Much of my life has been spent in research. You too will learn best by asking inspired questions.”

Recognizing that some may be struggling with questions, President Nelson said it is up to an individual to learn how to qualify for and receive answers.

“Where can you start?” he asked. “Begin by spending more time in holy places.”

Sharing personal experiences he has had working with the First Presidency while serving in the Quorum of the Twelve Apostles, President Nelson spoke of the process they—the 15 men sustained as prophets, seers, and revelators—go through when discussing issues in the Church.

“The First Presidency and Quorum of the Twelve Apostles counsel together and share all the Lord has directed us to understand and to feel, individually and collectively,” he said. “And then, we watch the Lord move upon the President of the Church to proclaim the Lord’s will.”

This “prophetic process”—which also includes fasting, prayer, studying, pondering, and counseling with each other as they wrestle with the issue—was followed in 2012 with the change in age for missionary service, as well as the recent additions to the Church’s handbook, consequent to the legalization of same-sex marriage in some countries, President Nelson said.

“Filled with compassion for all, and especially for the children, we wrestled at length to understand the Lord’s will in this matter,” he said. “Ever mindful of God’s plan of salvation and of His hope for eternal life for each of His children, we considered countless permutations and combinations of possible scenarios that could arise. We met repeatedly in the temple in fasting and prayer and sought further direction and inspiration.

“And then, when the Lord inspired His prophet, President Thomas S. Monson, to declare the mind of the Lord and the will of the Lord, each of us during that sacred moment felt a spiritual confirmation. It was our privilege as Apostles to sustain what had been revealed to President Monson. Revelation from the Lord to His servants is a sacred process. And so is your privilege of receiving personal revelation.”

Just as the Apostles seek, ponder, pray, study, and wrestle when faced with difficult questions, so does each person as he or she seeks answers to his or her own questions. 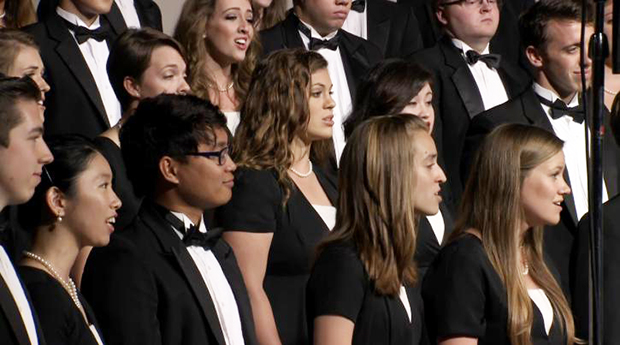 The BYU–Hawaii Concert Choir performs during the Worldwide Devotional for Young Adults on January 10. Image from ChurchofJesusChrist.org broadcast.

Fourth, President Nelson spoke of the need to “follow the prophets.”

“Prophets see ahead,” he said. “They see the harrowing dangers the adversary has placed, or will yet place, in our path. Prophets also foresee the grand possibilities and privileges awaiting those who listen with the intent to obey. …

“You may not always understand every declaration of a living prophet,” he said. “But when you know a prophet is a prophet, you can approach the Lord in humility and faith and ask for your own witness about whatever His prophet has proclaimed.”

Sister Nelson spoke about “becoming the person you were born to be.”

“When we’re desperate to become the people we were born to be, our vision changes,” she said. “We wake up from the spiritual amnesia the adversary so cleverly administers, and suddenly we see things about ourselves, others, and our lives we’ve never seen before.”