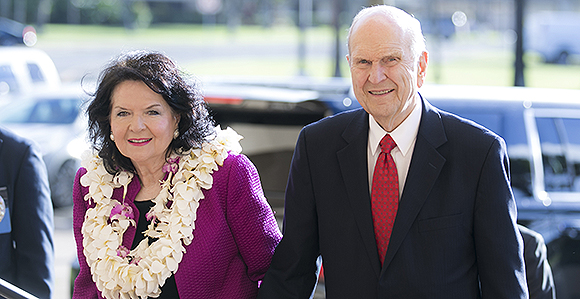 President Russell M. Nelson and his wife, Sister Wendy W. Nelson, on the BYU–Hawaii campus during their last stop on the prophet’s global tour.

“Families literally can be together forever.” —President Russell M. Nelson

In his last assignment of his world tour, President Russell M. Nelson shared a message with Church members gathered in the Cannon Activities Center in Laie—home to many Church members, a temple, the Polynesian Cultural Center, and the Church’s Brigham Young University–Hawaii—for a special devotional.

Accompanied by his wife, Wendy, and Elder Jeffrey R. Holland of the Quorum of the Twelve Apostles and his wife, Patricia, the visit to Hawaii April 22 came after the 93-year-old prophet visited seven countries in 12 days—beginning on April 10 in Europe, then Jerusalem, followed by Africa and then Asia.

Each stop he made had a significant tie to the temple—whether it be an ancient temple in Jerusalem, the announcement of a temple in an area, or the blessings that come from living the covenants made in the temple.

“Families literally can be together forever,” he said.

“Our message to you tonight is the same as the message we’ve given to others, that God lives, that Jesus is the Christ, that this is His Church restored in its fulness.”

“We are very sorry for the nations we didn’t get to visit, so in a way it was symbolic. It’s a global ministry and a global message—faith in the Lord Jesus Christ [and] strengthening your own families as they qualify for eternal life in the presence of deity.”

Sister Nelson shared her personal witness of President Nelson’s call as a prophet.

“My husband and I wish we could sit with each of you, in your kitchen or on the beach, and have a heart-to-heart conversation over some pineapple and shrimp or a little bowl of sticky rice,” she said.

Sharing some insights into how their home—and lives—have changed since President Nelson’s call to be the prophet, Sister Nelson explained how more than anything, she has seen how the Lord is using her husband to accomplish His work.

“During our 12 years of marriage I have been accustomed to my husband being awakened during the night with ideas for and refinements to general conference talks,” she said. “But since becoming President of the Church, the frequency and abundance of the messages to him from heaven have increased exponentially.”

Most important, she shared her personal, sacred witness of her husband’s call.

“That experience … is too sacred for me to share over the pulpit, but it is one that I can never forget or deny,” she said. “Because of that sacred experience I can take any witness stand in any nation on earth and testify that I know that President Russell Marion Nelson has been called by God to be the living prophet of the Lord on the earth today.”

Welcoming students and guests to the college’s 100-acre campus is a large mosaic mural at the entrance—designed by artist Norman Burr—depicting the visit of David O. McKay on his apostolic journey around the world in 1921.

The scene depicts then-Elder McKay at a flag-raising ceremony, held on February 7, 1921. At the time, Elder McKay and Elder Hugh J. Cannon were on an assignment from the First Presidency to travel for one year, touring around the globe visiting all of the missions and Church schools throughout the world.

It was during that stop in Laie that Elder McKay saw in vision an institution of higher learning that would bring students together from all across the globe.

“It is fitting that President Nelson’s global journey should end here, in Laie, at a university whose history and mission are intimately intertwined with the international Church,” said BYU–Hawaii President John S. Tanner, during commencement held just a day prior to the prophet’s visit. (See related story.)

“I think it is really fitting that we ended this sojourn we have undertaken in Laie,” said Sister Holland. “I always feel the Spirit of the Lord here. It’s because of your faith … that has always existed among the people of the islands of the sea. … 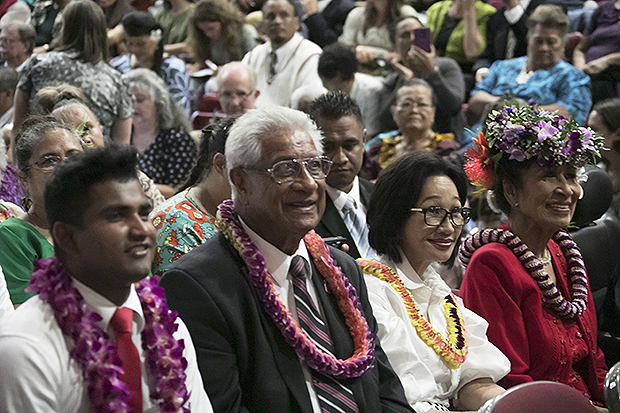 Church members listen during a special devotional in Laie, Hawaii, on April 22.

Elder Holland added in his remarks: “As we come to the close of something that will never come again, … we want you to know how grateful we are and that we count our blessings and do not take them for granted. We’ve met multitudes; we have met as many people as can get into venues. … We got the biggest venue possible in those cities and filled them, and still there were people who didn’t get the chance to participate. We have been wonderfully, lovingly overwhelmed with numbers.”

Members living in Hawaii were delighted to have the prophet they recently sustained visiting their home.

“As a mom, my goal or desire in life is to have my children stay close to the Lord and to know for themselves and have a testimony of the Savior,” said Eve Annandale, a member of the Hauula 4th Ward, Laie Hawaii Stake. “This felt almost like a once-in-a-lifetime opportunity to have the prophet come here where we live and to be among us.” 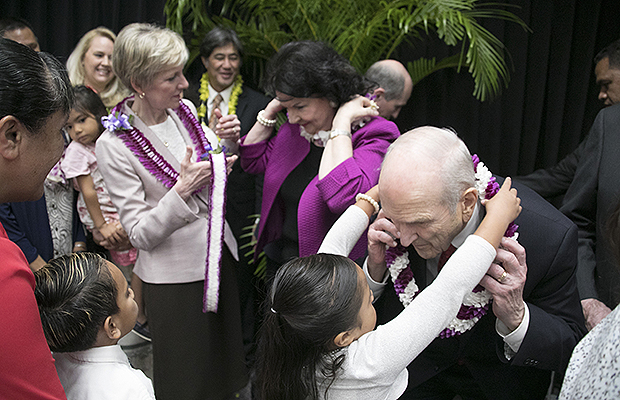 A young girl places a lei on President Russell M. Nelson in Laie, Hawaii, on April 22, during the prophet’s final stop on his global tour.

Annandale and her husband, Neil, were able to attend with four of their five children—their youngest was not old enough to attend. Annandale said in talking with her children, they noticed feeling the Spirit during the meeting.

“The opening song was ‘Families Can Be Together Forever,’” she said. Just a week previously, her family had joined together to sing that hymn at her grandmother’s funeral.

“It was amazing to start the meeting that way. And then to hear from an apostle and our prophet and their wives—it was amazing.”

“I loved how [Sister Nelson’s] testimony was a confirmation to me that her husband is the prophet,” he said. “I was so overwhelmed and so filled with love.”

He hopes the members in his stake felt that President Nelson is a prophet and that they were able to see the examples of true disciples.

“I went away truly better myself,” President Laulu said. “I hope the members of my stake renew their commitment to follow Christ.” 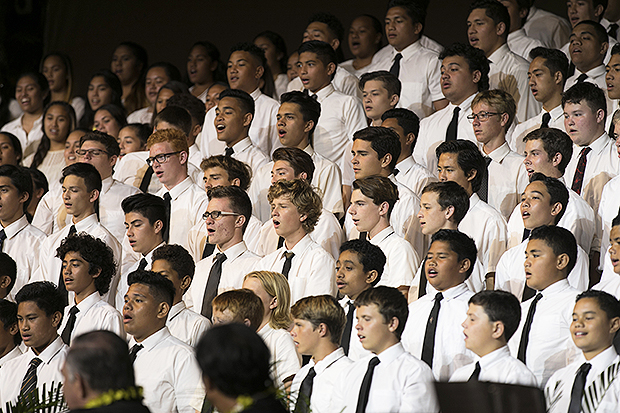 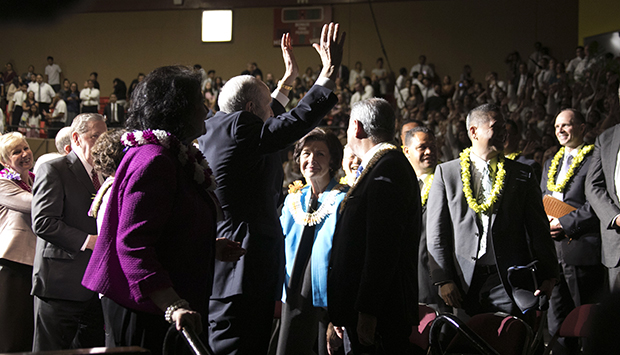 President Russell M. Nelson and his wife, Sister Wendy W. Nelson, wave to Church members after speaking during a special devotional held on the BYU–Hawaii campus on April 22 during their last stop on the prophet’s global tour. 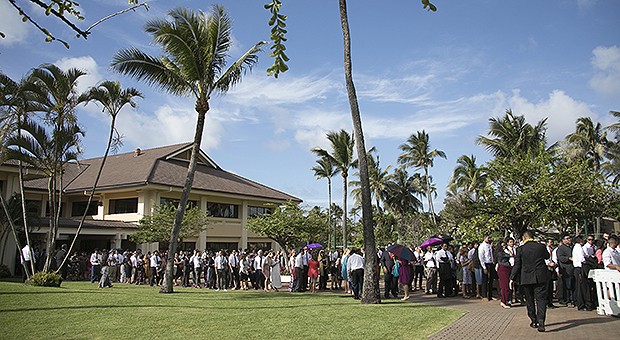 Members on the BYU–Hawaii campus. 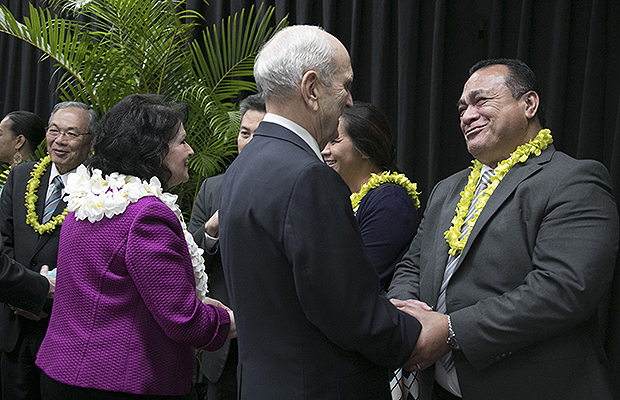 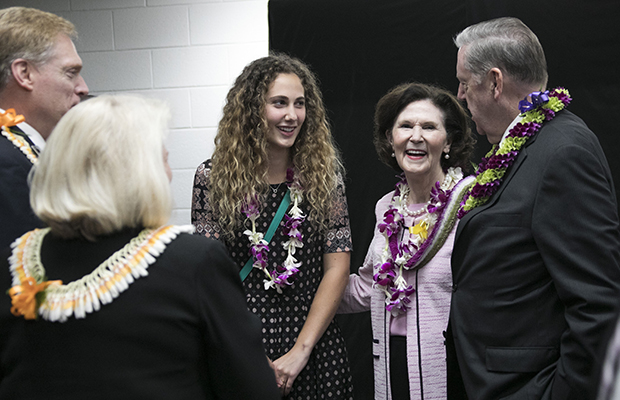