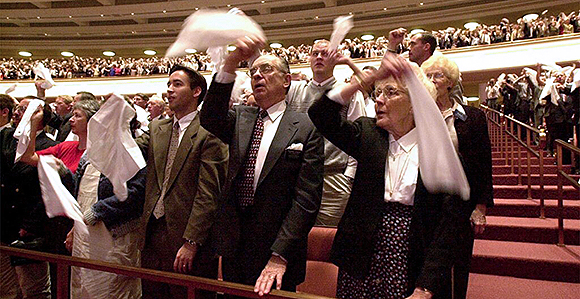 Dorothy Johnson, far right, of Appleton, Wisconsin, joins in on the Hosanna Shout during the dedication of the Conference Center in the Sunday morning session of the October 2000 general conference. Photo by Laura Seitz, Deseret News.

“We pray that this will be a spiritual highlight for you as we express in global unison our profound gratitude to God the Father and His Beloved Son by praising Them in this unique way.” —President Russell M. Nelson

In the opening moments of the 190th Annual General Conference, President Russell M. Nelson invited members of The Church of Jesus Christ of Latter-day Saints to participate in a worldwide solemn assembly and Hosanna Shout during the Sunday morning session.

“We pray that this will be a spiritual highlight for you as we express in global unison our profound gratitude to God the Father and His Beloved Son by praising Them in this unique way,” President Nelson said.

“For this sacred experience, we use clean, white handkerchiefs,” he continued. “But, if you do not have one, you may simply wave your hand. At the conclusion of the Hosanna Shout, the congregation will join with the choir in singing ‘The Spirit of God.’”

What Is a Solemn Assembly?

A solemn assembly is a sacred meeting held for a variety of reasons, such as sustaining the Church’s worldwide governing body, participating in temple dedications, and receiving instruction from presiding authorities. This meeting is most often held at general conference after a new Church President begins his service, according to Newsroom.

A solemn assembly was held in April 2018 when President Nelson was sustained for the first time.

What Is the Hosanna Shout?

Latter-day Saints join together for the Hosanna Shout as each new temple is dedicated or rededicated. The Hosanna Shout has also been given during a few other historic occasions, such as the Conference Center dedication.

President Gordon B. Hinckley, 15th President of the Church, described the Hosanna Shout as a “sacred salute to the Father and the Son.” It is an expression of worship and gratitude.

When President Hinckley dedicated the Conference Center in Salt Lake City, Utah, during the October 2000 general conference, he invited those listening around the world to stand and participate in the Hosanna Shout.

Those gathered in the Conference Center and millions in their homes stood and waved a clean white handkerchief while shouting in unison, “Hosanna, hosanna, hosanna to God and the Lamb,” three times, followed by “Amen, amen, and amen.”

President Hinckley directed the media to be sensitive to this “very sacred and personal thing” and requested it be “treated with deference and respect” (“This Great Millennial Year,” Ensign and Liahona, Nov. 2000).

Hosanna means “save now” and is taken from Psalm 118. “The chanting of this psalm was connected at the Feast of Tabernacles with the waving of palm branches; hence the use of the word by the multitudes at our Lord’s triumphal entry into Jerusalem” (Bible Dictionary, “Hosanna,” scriptures.ChurchofJesusChrist.org). 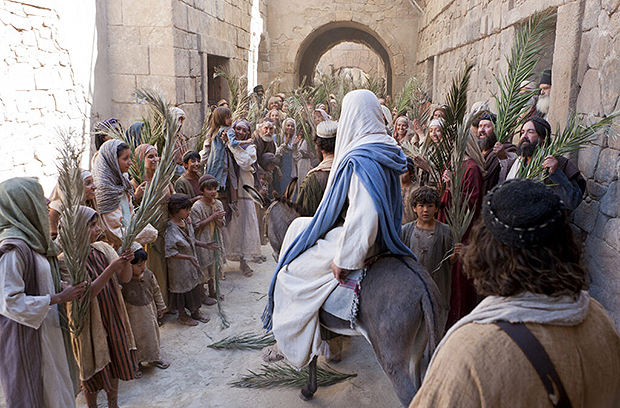 An image from a Church-produced Bible video depicts the Savior’s triumphal entry into Jerusalem.

The practice is “reminiscent of the praise of the followers of Jesus as he descended the Mount of Olives (Matt. 21:1–11), and of the outcry of the multitudes in America while surrounding the temple in the land Bountiful (3 Ne. 11:17),” according to the Encylopedia of Mormonism entry on temple dedications.

“It also parallels the ‘praising and thanking the Lord’ by voices and instruments at the dedication of Solomon’s temple (2 Chr. 5:11–14).”

This “sacred salute” is often followed by a choir singing the Hosanna Anthem and William W. Phelps’s “The Spirit of God.”

The first recorded Hosanna Shout in the latter days occurred at the dedication of the Kirtland Temple on March 27, 1836.

The Prophet Joseph wrote: “President [Sidney] Rigdon then made a few appropriate closing remarks, and a short prayer, at the close of which we sealed the proceedings of the day by shouting hosanna, hosanna, hosanna to God and the Lamb, three times, sealing it each time with amen, amen, and amen” (History of the Church, 2:427).

Other Instances of the Hosanna Shout

During the April 1892 general conference, President Wilford Woodruff directed the laying of the capstone of the Salt Lake Temple. Some 50,000 Latter-day Saints—the largest audience to ever assemble in the Church at that time—filled Temple Square and adjoining streets.

President Lorenzo Snow, fifth President of the Church, said of the Hosanna Shout at the Salt Lake Temple capstone ceremony, “This is no ordinary order, but is—and we wish it to be distinctly understood—a sacred shout, and employed only on extraordinary occasions like the one now before us. We wish it also to be distinctly understood that we want the brethren and sisters not only to express the words, but that their hearts shall be full of thanksgiving to the God of heaven, who has accomplished, through our agency, this mighty and extraordinary labor” (Teachings of Presidents of the Church: Lorenzo Snow [2011]).

Other instances of the Hosanna Shout in early Church history occurred at the laying of the capstone of the Nauvoo Temple in May 1845, upon entering the Salt Lake Valley for the first time, and at a July 24 celebration in Brigham City in 1875.

The Hosanna Shout was also given during the celebration of the centennial of the Church in the 1930 general conference.

Elder B. H. Roberts, a General Authority Seventy and assistant Church historian who died in 1933, said of the Hosanna Shout, “It is impossible to stand unmoved on such an occasion. It seems to fill the prairies or woodland, mountain wilderness or tabernacle, with mighty waves of sound; and the shout of men going into battle cannot be more stirring.

“It gives wonderful vent to religious emotions and is followed by a feeling of reverential awe—a sense of oneness of God” (Comprehensive History of the Church, 3:317).