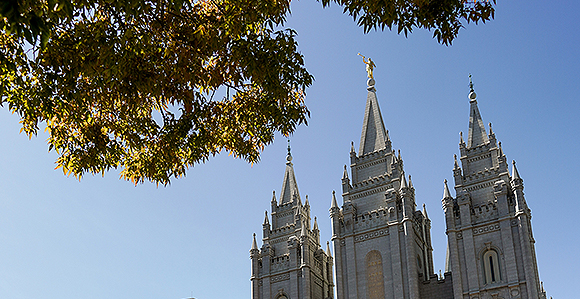 The Salt Lake Temple of The Church of Jesus Christ of Latter-day Saints in Salt Lake City on Saturday, October 5, 2019. Photo by Spenser Heaps, Deseret News.

President Russell M. Nelson announced eight new temples during the women’s session of the 189th Semiannual General Conference. The temples were announced in the following locations:

During the October 1997 general conference, President Gordon B. Hinckley revealed plans to build three smaller than usual temples in Monticello, Utah; Anchorage, Alaska; and Colonia Juarez Mexico. Those temples would serve as prototypes for a new design.

“In recent months we have traveled far out among the membership of the Church,” President Hinckley said during the 1997 announcement. “I have been with many who have very little of this world’s goods. But they have in their hearts a great burning faith concerning this latter-day work. They love the Church. They love the gospel. They love the Lord and want to do His will. They are paying their tithing as modest as it is. They make tremendous sacrifices to visit the temples. They travel for days at a time in cheap buses and on old boats. They save their money and do without to make it all possible.

Thirty such temples, said the Church’s 15th president, would be built in continents across the world.

President Hinckley was inspired to build smaller temples while on a road trip between Colonia Juarez, Mexico, and El Paso, Texas.

“I reflected on what we could do to help these people in the Church colonies in Mexico,” he said in a 1998 Church News interview. “They’ve been so very faithful over the years. … And yet, they’ve had to travel all the way to Mesa, Arizona, to go to a temple.”

Then the smaller temple concept came to the prophet’s mind.

The essential elements of the temple, he knew, could be included in smaller structures that could be built in a shorter amount of time at a reduced cost.

The Monticello edifice became the first of the “small” temples in July 1998. Dozens of such temples were built in corners across the globe, offering legions of Latter-day Saints unprecedented access to the blessings of temple service.

As reflected in Saturday evening’s announcement, the vast majority of the Church’s “announced” temples are to be built outside of the United States.