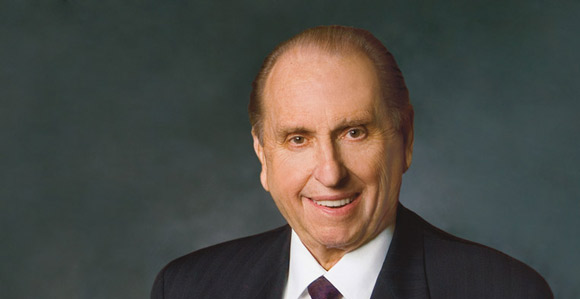 “I never cease to be amazed by how the Lord can motivate and direct the length and breadth of His kingdom and yet have time to provide inspiration concerning one individual. . . . The fact that He can, that He does, is a testimony to me.” —President Thomas S. Monson of The Church of Jesus Christ of Latter-day Saints

President Thomas S. Monson said it seems a very short time ago that he stood at the pulpit in the Tabernacle to give his first general conference address as when was called to serve as a member of the Quorum of the Twelve 49 years ago.

He said much has changed since that day, Oct. 4, 1963, and that this is a unique time in the world's history. While being blessed with so very much, it is sometimes difficult to view the problems and permissiveness in the world and not become discouraged. “I have found that, rather than dwelling on the negative, if we will take a step back and consider the blessings in our lives, including seemingly small, sometimes overlooked blessings, we can find greater happiness,” he said.

“As I have reviewed the past 49 years, I have made some discoveries,” he continued. “One is that countless experiences I have had were not necessarily those one would consider extraordinary. In fact, at the time they transpired, they often seemed unremarkable and even ordinary. And yet, in retrospect, they enriched and blessed lives—not the least of which was my own. I would recommend this same exercise to you—namely, that you take an inventory of your life and look specifically for the blessings, large and small, you have received.

”Reinforced constantly during my own review of the years has been my knowledge that our prayers are heard and answered,“ he said. He quoted 2 Nephi 2:15, ”Men are, that they might have joy.“

”I testify that much of that joy comes as we recognize that we can communicate with our Heavenly Father through prayer that those prayers will be heard and answered—perhaps not how and when we expected they would be answered, but they will be answered, and by a Heavenly Father who knows and loves us perfectly and who desires our happiness,” he said. “Hasn't He promised us, 'Be thou humble; and the Lord thy God shall lead thee by the hand, and give thee answers to thy prayers,'“ (Doctrine and Covenants 112:10).

Drawing from journals he has kept, President Monson spoke of some of experiences he has had wherein prayers were heard and answered and which, in retrospect, brought blessings into his life as well as the lives of others.

He spoke of being in Brisbane, Australia, in 1965, for a stake conference when, upon shaking the hand of the district president from an adjoining area on Saturday, he felt impressed that he needed to speak with this man and invited him to accompany him to the stake conference the next morning. He said counseled the district president pertaining to missionary work and how he and his members could help the full-time missionaries. President Monson later learned that the district president had been praying for such guidance. ”This was a seemingly unremarkable meeting but one which I am convinced was guided by the Spirit and which made a difference in that district president's life and administration, in the lives of his members, and in the success of the missionaries there,“ he said.

He said the Lord's purposes are often accomplished as individuals pay heed to the guidance of the Spirit.

As he has done in previous messages, he urged members to never postpone a prompting.

He said that one day he was prompted to visit a hospitalized friend who had lost the use of his lower limbs. When he arrived, President Monson said, his friend was not in his room. He eventually found him in his wheelchair by the deep end of a pool used for physical therapy. No one else was in the room.

”I learned later from my friend that he had been utterly despondent that day and had been contemplating taking his own life,” he recounted. “He had prayed for relief but began to feel that his prayers had gone unanswered. He went to the pool with the thought that this would be a way to end his misery—by guiding his wheelchair into the deep end of the pool. I had arrived at a critical moment, in response to what I know was inspiration from on high.“

On another occasion, President Monson and his wife, Sister Frances J. Monson, were impressed to drive many miles to visit an elderly widow, Zella Thomas, who had once lived in their ward and was then in a care center. The woman, who was blind, recognized their voices, and told him she had prayed that he would visit and give her a blessing, which he did. ”I told her I had come because of direct inspiration from our Heavenly Father,“ President Monson said. ”I kissed her on the forehead, knowing that I perhaps would not again see her in mortality. Such proved to be the case, for she passed away the following day. To have been able to provide some comfort and peace to our sweet Zella was a blessing to her and to me.“

An unexpected blessing came as President and Sister Monson's car quit running one night in the winter of 1983-84. The young man who stopped to help gave them a ride, said he wasn't sure whether he would serve a mission. President Monson he sent him a letter, thanking him for his kindness and encouraged him to go on a mission. President Monson sent him one of his books in which he underscored chapters on missionary service. About a week later, the young man's mother telephoned and said that because of certain influences in his life, her son's long-held desire to serve a mission had diminished. She said she and her husband prayed he would return to his desire to fill a mission and serve the Lord. ”She looked upon the events of that cold evening as an answer to their prayers in his behalf,“ he recalled. President Monson said he agreed with her.

After several months and more communication, President and Sister Monson attended the young man's missionary farewell. President Monson said he did not feel it was by chance that their paths had crossed on that cold December night.

President Monson spoke of attending the cultural celebration held in conjunction with the dedication of the Kansas City Missouri Temple last May. He said the youth had rehearsed separately, planning to practice together on Saturday morning before that evening's performance. The entire production depended on prerecorded segments on a JumboTron, which did not work. Technicians worked all day to solve the problem. Just an hour before the audience was to enter the performance arena, the 3,000 young people knelt and prayed that those working on the JumboTron would be inspired to know what to do to repair it, and asked their Heavenly Father to make up for what they, themselves, could not do because of the shortage of time. Soon, a technician said the problem had been discovered and corrected. ”He attributed it to 'luck,' but all those youth knew better,“ President Monson said.

He said the performance was beautiful and polished. ”When I learned their rehearsals had been cut short and that many of the numbers had not been rehearsed by the entire group, I was astonished. No one would have known. The Lord had indeed made up the difference,” President Monson said.

“I never cease to be amazed by how the Lord can motivate and direct the length and breadth of His kingdom and yet have time to provide inspiration concerning one individual—or one cultural celebration, or one JumboTron,” he concluded. “The fact that He can, that He does, is a testimony to me.”