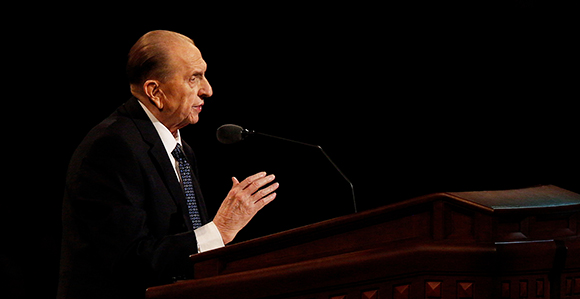 President Thomas S. Monson began his address in the Sunday morning session of the 186th Annual General Conference by announcing that in the coming months and years, four new temples will be built.

Their locations are Harare, Zimbabwe; Quito, Ecuador; Belém, Brazil; and a second temple in Lima, Peru.

“When I became a member of the Quorum of the Twelve Apostles in 1963, there were 12 operating temples in the entire Church,” said President Monson. “With the dedication of the Provo City Center Temple two weeks ago, there are now 150 temples in operation throughout the world. How grateful we are for the blessings we receive in these holy houses.”

Zimbabwe is home to approximately 14.2 million people and more than 26,000 members of the Church. The temple planned for Harare, Zimbabwe’s capital and most populous city, will be the first in the country.

The Church has three operating temples in Africa (Aba, Nigeria; Accra, Ghana; and Johannesburg, South Africa), one under construction (Kinshasa, Democratic Republic of the Congo), and three more announced (Abidjan, Ivory Coast; Durban, South Africa; and Harare, Zimbabwe). The closest temple to Harare is in Johannesburg, a 13-hour drive.

As early as 1925, the Church had members in Southern Rhodesia—the name of the nation of Zimbabwe prior to 1980. Peter and Elizabeth DuPlooy, who lived 62 miles out of what is now the city of Harare, were baptized on March 10, 1925, while on a visit to South Africa.

Five years later the Church sent missionaries to the new Rhodesia District, and they worked in the area for five years due to the city’s distance from mission headquarters.

Members continued contact through letters written to the South African Mission headquarters that ran news in the mission publication The Southern Cumorah Cross.

In 1950, missionaries returned to Rhodesia. On February 1, 1951, the first convert, Hugh Hodgkiss, was baptized; the Salisbury (now called Harare) Branch was organized in September 1951.

On April 18, 1980, Britain recognized Rhodesia's independence and the country's name was officially changed to Zimbabwe. On July 1, 1987, the Zimbabwe Harare Mission was organized from the South Africa Johannesburg Mission. In 1988, selections from the Book of Mormon were translated in Shona.

President Gordon B. Hinckley, on a five-country tour of Africa, visited Zimbabwe on February 18, 1998, and spoke to about 1,500 Latter-day Saints.

On December 12, 1999, the Harare Zimbabwe Stake was organized by Elder Dennis E. Simmons of the Seventy.

Ecuador is home to approximately 15.8 million people and more than 230,000 members of the Church. The temple in Quito, Ecuador’s capital and second most populous city, will be the country’s second temple.

Located on the equator on the Pacific Coast side of South America, Ecuador is divided into three zones by two ranges of Andes mountains. Its population speaks Spanish or Quechua.

A telephone call from Elder Spencer W. Kimball, then of the Quorum of the Twelve Apostles, to President J. Averil Jesperson of the Andes Mission in Lima, Peru, on September 22, 1965, directed the beginning of missionary work in Ecuador. Four missionaries were sent to Quito, and Elder Kimball visited the city on October 9. Less than a month after Elder Kimball's visit, nine people were baptized in Alangasi de la Merced, located about 50 miles southeast of Quito.

Missionary work progressed rapidly. In the city of Guayaquil missionary work began on January 28, 1966. When the Ecuador Mission, headquartered in Quito, was created on August 1, 1970, membership was 1,000. Ecuador's first stake was organized in Guayaquil in June 1978. A second mission in the country was organized in Guayaquil one month later. Some early missionary efforts were conducted among the Otavalo Indians near Quito, among whom the first all-Lamanite stake in South America was organized in 1981. In 1989, the headquarters for the South America North Area was moved from Lima, Peru, to Quito, Ecuador.

Although the construction of a temple for Guayaquil was announced in March 1982, it was not finished and dedicated until August 1, 1999.

Two years before the dedication, President Gordon B. Hinckley became the first Church President to visit Ecuador. He toured the temple under construction and, in two meetings, described to 15,000 Ecuadoran Church members how he had been impressed to find the site several years earlier. At a regional conference on July 31, 1999, President Hinckley spoke to nearly 22,000 members and told them, in contemplation of the temple dedication the following day, “This is a day to be remembered by Latter-day Saints for many years to come.”

Nearly 1.3 million of Brazil’s 204 million people are members of the Church. Six operating temples (Campinas, Curitiba, Manaus, Porto Alegre, Recife, and São Paulo) currently dot the country. Another temple is under construction in Fortaleza, and two others are announced for Rio de Janeiro and now Belém.

Brazil, a federal republic with a Portuguese-speaking population, covers almost half the continent of South America.

The first known Church member in Brazil was Max Richard Zapf, who was baptized in Germany in August 1908 and immigrated to Brazil in 1913. After many years with no Church contact, Brother Zapf and his family learned that Augusta Kuhlmann Lippelt and her four children, who had also joined the Church in Germany before immigrating to Brazil in 1923, were living in the small southern Brazilian town of Ipomoea. Augusta's husband, Roberto, although not a member when he moved his family to Brazil, was baptized several years later. The Zapf family soon relocated to be with their new friends, the Lippelt family. These two families represented the beginning of the Church's permanent presence in Brazil.

The president of the South American Mission in Buenos Aires, Argentina, first visited Brazil in 1927 and returned with the elders to begin missionary work in September 1928. A branch was organized in Joinville in 1930, and the first Church-owned meetinghouse in South America was dedicated a year later in Joinville.

A mission was created and headquartered in Sao Paulo, Brazil, on May 25, 1935. A Portuguese edition of the Book of Mormon was published in 1939.

In October 1993, construction began on a missionary training center in Sao Paulo, the Church’s second largest MTC. The seven-story building, capable of accommodating 750 missionaries, was dedicated May 18, 1997, by Elder Russell M. Nelson of the Quorum of the Twelve Apostles. In October 1998, North American missionaries called to Brazil began receiving nearly half of their training at the Brazil Missionary Training Center. The program to send North American missionaries to Brazil for four weeks of training enabled them to be immersed in the Brazilian culture and Portuguese language in a controlled environment.

The program was so successful that in April 2000 the first 22 North American missionaries were sent to Brazil for their full eight weeks of training. 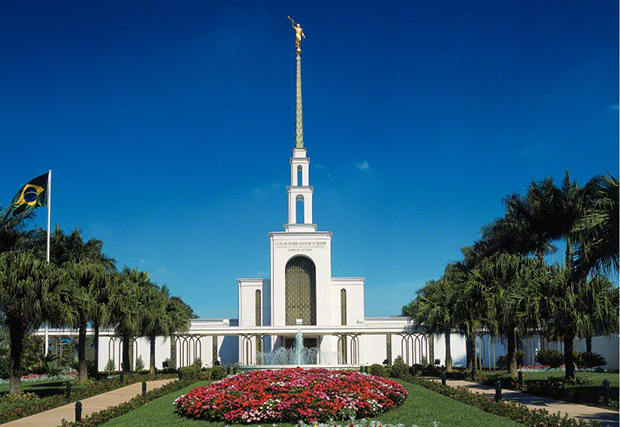 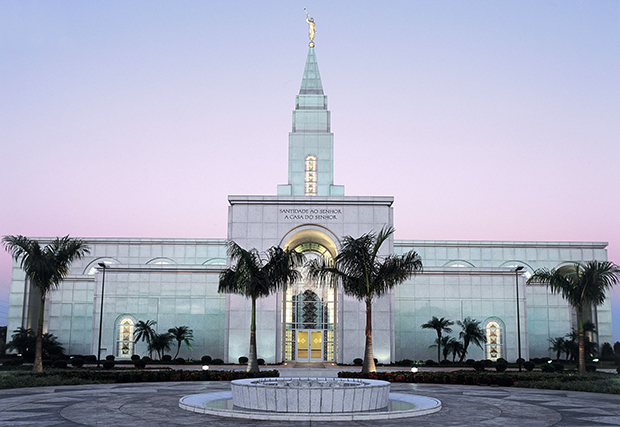 The Campinas Brazil Temple is evidence of many years of missionary work in Brazil.

Peru is home to approximately 30 million people and 557,000 members of the Church. The country has two operating temples (Lima and Trujillo) and two temples that have been announced (Arequipa and the new temple announced in Lima). The first temple in Lima was dedicated in 1986.

Located on the Pacific Coast side of South America, Peru is a constitutional republic with a population that speaks Spanish, Quechua, and Aymara.

Prior to 1956, Latter-day Saint families living in Peru held group meetings, but no organized missionary work was done.

Frederick S. Williams, a former mission president in Argentina and Uruguay, moved to Peru with his family in 1956 and soon contacted Church headquarters for permission to organize a branch and begin missionary work.

A branch in Lima was organized on July 8, 1956, by Elder Henry D. Moyle of the Quorum of the Twelve Apostles. A building for branch meetings was purchased the following November.

The Andes Mission, headquartered in Lima, was established on November 1, 1959. At the time, there were five branches and 300 members.

Growth continued as local leaders assumed priesthood leadership. At a two-day area conference in Lima in 1977, presided over by President Spencer W. Kimball, 7,900 attended. Four years later in 1981, President Kimball announced a temple for Lima, which was completed and dedicated on January 10, 1986. Twelve years later, a new missionary training center, with capacity for 150 missionaries and room for expansion, was dedicated by Elder Russell M. Nelson of the Quorum of the Twelve Apostles.

Just 32 years after missionary work started in Peru, seven stakes in Lima were created in one weekend in 1988 by Elder M. Russell Ballard of the Quorum of the Twelve Apostles. Lima then had the second largest number of stakes of any metropolitan area outside the United States. Although Peru experienced political instability, the Church continued to grow.

President Gordon B. Hinckley visited Lima on November 8–9, 1996, and spoke to some 35,000 people. A new area, the South America West Area, was created in 1998, comprising only Peru and Bolivia, with headquarters in Lima. 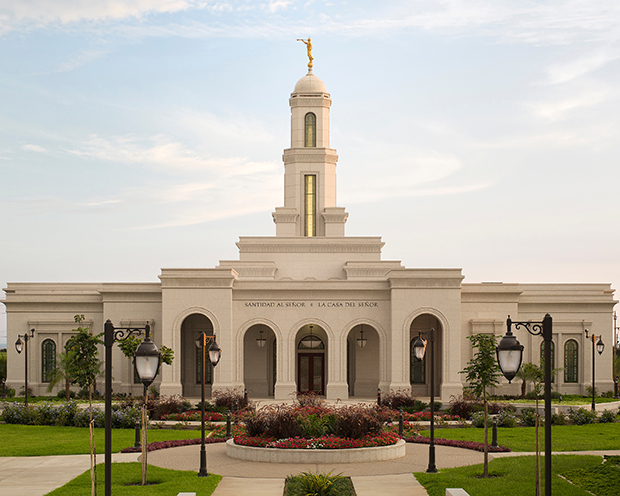 The Trujillo Peru Temple was the second LDS temple in Peru.