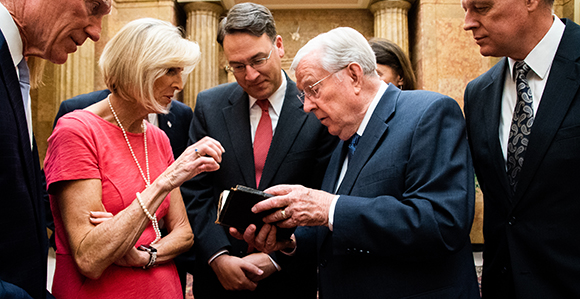 President M. Russell Ballard examines a Bible that belonged to Joseph F. Smith and is being donated to the Church by the Jackson family. Photo by Savannah Hopkinson, Deseret News.

Scott Jackson was thumbing through his family’s treasured Bible in 1995 when he saw it: markings made by his great-grandfather President Joseph F. Smith.

The specific markings in 1 Peter 3 and 4 suggested that this Bible was the one President Smith was studying during the time he received the revelation known as the vision of the redemption of the dead, now found in Doctrine and Covenants 138.

Jackson and his siblings donated the Bible to the Church on the 100th anniversary of the revelation. The eight Jackson siblings met President President M. Russell Ballard, Acting President of the Quorum of the Twelve Apostles, and Brandon Metcalf, an archivist in the Church History Department, at the Church Administration Building on July 10, where they handed the Bible over to the Church. 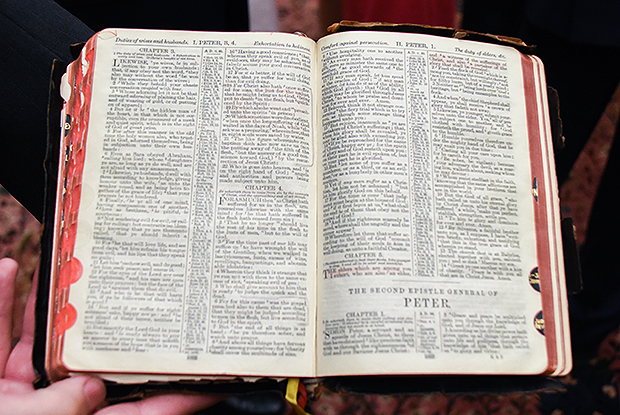 Pages in a Bible owned by President Joseph F. Smith. The Jackson family, who recently donated the Bible to the Church, believe the faintly marked passages indicate that this is the Bible President Smith was using when he received the revelation now found in Doctrine and Covenants 138. Photo by Savannah Hopkinson, Deseret News.

President Smith’s signature is found on the inside cover of the Bible along with the date, April 1, 1913.

The Jackson family believe the passages marked in 1 Peter 3 and 4 and other passages mentioned in section 138 influenced President Smith as he prepared to receive the revelation.

Steven Jackson, the oldest sibling, said the donation was also made in commemoration of the 100th anniversary of President Smith’s death in November 1918.

Brandon Metcalf added that the revelation is particularly significant in light of world events—World War I and an influenza pandemic. Some 9 million soldiers, sailors, and airmen and 5 million civilians died in World War I, and between 25 and 50 million people died in six months during the 1918–19 influenza pandemic.

Since death was front page news every day, President Smith was thinking about what happened to those who died. He had time to think about the subject because he was basically bedridden for several months leading up to this revelation.

“Also that year, he had lost his son Hyrum Mack Smith; a son-in-law, Alonzo Pratt Kesler; and a daughter-in-law, Ida Bowman, so I think death [was] on his mind,” Metcalf added.

President Ballard explained that both Hyrum Mack and Ida were his grandparents and expressed his gratitude to the Jackson family for gifting “this precious Bible” to the Church. 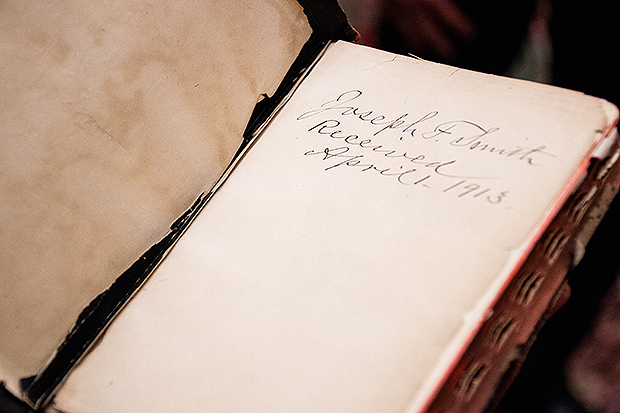 The inside cover of a Bible once owned by President Joseph F. Smith, where he wrote his name and the date. The Bible was recently donated to the Church. Photo by Savannah Hopkinson, Deseret News.

“What a treasure,” he said, speaking to the Jackson family. “When you think about our grandfather, our great-grandfather, you think about one of the great prophets that ever lived, in my judgment. I don’t know of any prophets in this dispensation short of Joseph Smith that taught the gospel more clearly than Joseph F. Smith.”

President Ballard added, “The vision of the redemption of the dead is a great addition to our scriptures and reveals more fully than any passages found in the scriptures that Jesus Christ loves all the daughters and sons of God and provided them the way to return home.”

Metcalf said the Bible will be kept in the Church History Library’s temperature- and humidity-controlled vaults. He also said the Bible looks like it’s been handled a lot over the years and has some loose pages, but the binding is still intact; the Church History Department won’t do much restoration in order to preserve the Bible’s story, though they will repair some of the loose pages.

“We try to keep things in the best possible environmental conditions to preserve the life of all the materials we collect here,” he said.

“I think the significance for us is that it tells us a great story of the days, the events, and even presumably the exact Bible that President Smith [used] in the months and years that led up to him receiving section 138 of the Doctrine and Covenants,” Metcalf said. “We appreciate the family being willing to donate the Bible and trust us with it, and we're grateful to be able to preserve this now for generations to come.”

Steven Jackson said though their family has kept the Bible for a long time, there was “a general family spirit” that they should donate the Bible to the Church for the 100th anniversary of the revelation. The Jackson family enjoyed the visit and discussion with President Ballard as they met—all cousins and family of the prophet Joseph F. Smith.

President M. Russell Ballard speaks with the Jackson family, who have been in possession of President Joseph F. Smith’s Bible and have decided to donate it to the Church. Photo by Savannah Hopkinson, Deseret News. 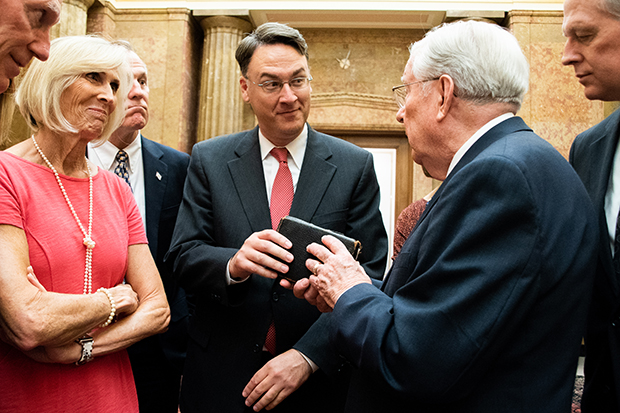 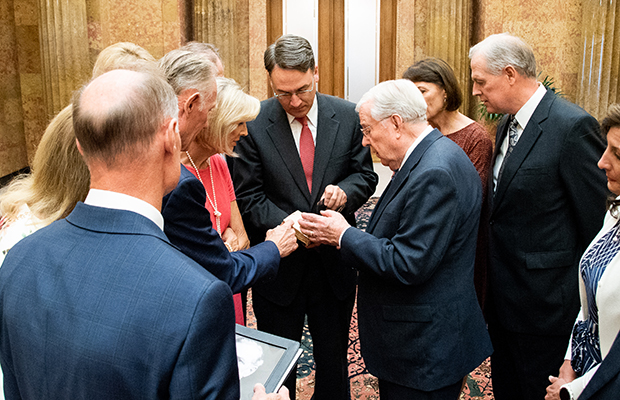 President M. Russell Ballard examines a Bible that belonged to Joseph F. Smith and is being donated to the Church by the Jackson family. Photo by Savannah Hopkinson, Deseret News. 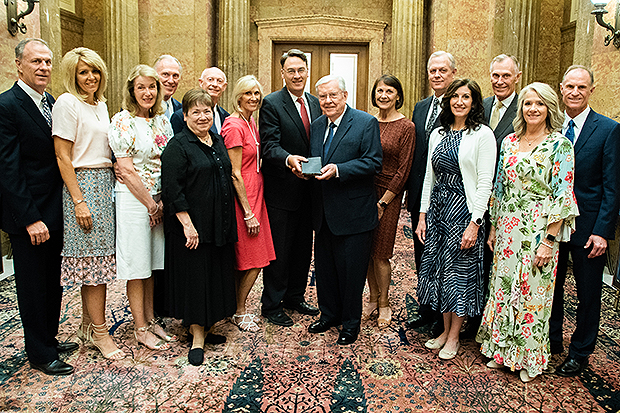