President Henry B. Eyring Speaks at Funeral for Clayton Christensen 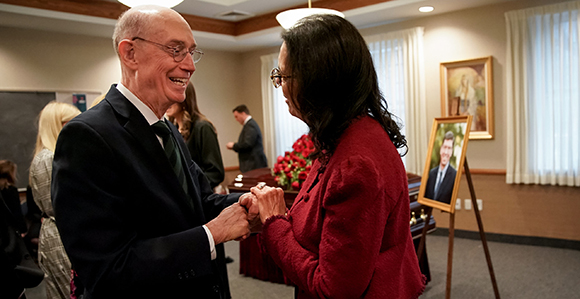 President Henry B. Eyring, Second Counselor in the First Presidency of The Church of Jesus Christ of Latter-day Saints, greets Christine Christensen before the funeral service for her husband, Clayton Christensen, at a Cambridge, Massachusetts, chapel on Saturday, February 1, 2020. Photo by Spenser Heaps, Deseret News.

President Henry B. Eyring, Second Counselor in the First Presidency, said he wrote a tribute to a great man to deliver at the funeral Saturday of Clayton Christensen, the father of the internationally renowned business theory of disruptive innovation.

“The family will do that better than you could do it,” President Nelson told President Eyring. “No, tell Sister Christensen where he is and what’s ahead for him. That will help her. Yes, she’ll feel lonely, but she’ll feel joy to think of who he really is and where he is now and the glorious future he has,” in part because of her influence.

“What he was saying was,” President Eyring said, “it’s sweet to look back, and it’s wonderful, but look forward. Where is he now? What’s ahead for him? How glorious is this?”

So on Saturday, February 1, President Eyring stood in front of more than 850 people, including giants of industry and academia, and spoke directly to Christine Christensen about the next world and her husband’s place in it.

Clayton Christensen died January 23 at age 67 of complications from cancer. His book The Innovator’s Dilemma has been ranked one of the six greatest business books. It describes disruptive innovation, the theory that an inferior product can upend an existing market if it is attractive and good enough to consumers at the low end. One example is Netflix, which disrupted DVD rental stores with DVDs by mail, then disrupted DVDs with streaming video.

Netflix CEO Reed Hastings told the Deseret News, “Clay was hugely influential on me as CEO. I owe much of our success to his writings.”

President Eyring used an example from his own life to illustrate his message. He said his family returned home after his mother died feeling deeply saddened.

“Dad slipped out of the living room to go into a next-door room,” he said. “And he came back, and he was smiling. Here we were all weeping as you will be weeping, and he was just fine. I said, ‘Dad, what happened?’ He said, ‘I was worried that Mildred would arrive and not know where to go and there’d be no one there to meet her.’

“And he said, ‘Oh, but my prayer was answered. I saw my mother,’ who had been dead for many years, ’rushing through the crowd to be sure she wasn’t late when she arrived.’ It was that real to him. He was not nostalgic. He was thinking of her (in the present). She was real to him.”

President Eyring told Christine Christensen that a great reunion of friends and family greeted Clayton Christensen on the other side, then led him to his new assignment.

Clayton Christensen served a mission to South Korea as a young man, then became a powerful member missionary who contributed to the Preach My Gospel manual and wrote a book called The Power of Everyday Missionaries.

“Can you imagine if you were trying to run the mission among the spirits in prison if Clayton Christensen arrived?” President Eyring said. “Do you have any idea? You can be quite confident he had his companion assigned within a very short time. Could you imagine the quality they would have assigned to him? And what he could do, we can’t even imagine.”

Clayton Christensen wrote 13 books. In addition to pioneering the theory of disruptive innovation, he proposed other theories that have gained traction in the management world, including the idea of “jobs to be done,” a framework for creating new products.

President Eyring also read a letter to Christine Christensen and her family signed by the First Presidency.

“Brother Christensen’s life was a model of diligence, personal integrity, and commitment to righteous living,” the letter read. “His dedication as a husband, father, grandfather, educator, author, researcher, and stalwart servant of the Lord influenced the lives of loved ones and countless others.” 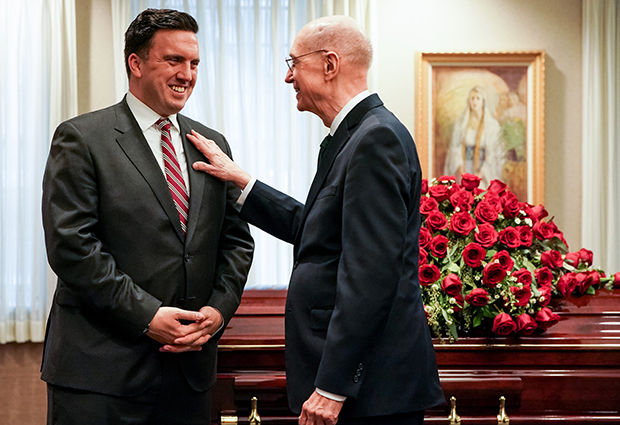 President Henry B. Eyring, Second Counselor in the First Presidency of The Church of Jesus Christ of Latter-day Saints, right, greets Michael Christensen during a viewing before the funeral of his father, Clayton Christensen, at a Cambridge, Massachusetts, chapel on Saturday, February 1, 2020. Photo by Spenser Heaps, Deseret News.

The funeral was held at the Binney Street meetinghouse in Cambridge, Massachusetts. All five of Clayton and Christine Christensen’s children spoke. They described him as a thoughtful husband, loving father, master teacher, and insatiable seeker of truth.

Clayton Christensen grew up in Rose Park, a neighborhood in western Salt Lake City. His father was a grocer, and his mother wrote production scripts. When he or his seven siblings asked her for help, she would say, “If I were going to do this for you, this is how I would do it.” Clayton Christensen used that method in his Harvard courses and with tech CEOs, teaching them not what to do but how to think.

As a member missionary, he was stung when a friend told him that he stopped spending as much time with him after the friend rejected his gospel message. His first class as a Harvard professor went poorly until a man next to him on an airplane advised him to love his students more. He made adjustments, maintaining friendships with all and praying that his students would feel God’s love through his teaching. The result blessed others’ lives.

“You could fill Gillette Stadium, where the New England Patriots play, with people who legitimately thought they were one of Clay’s best friends,” former OnStar CEO Chet Huber told the Church News, “because when he was with you, that was what you felt. He had the world shut out; his focus was on you; his care was on you. He had a gift that just touched so many people’s lives. I will profoundly miss him. It’s up to us now to make sure it keeps going.”

As his body broke down—he suffered a heart attack, a stroke, and two bouts of cancer—some told his son, Matt, that he was like Job. Matt Christensen rejected the comparison for a long time because his mother, unlike Job’s wife, never lost faith. She accompanied him all over the world to help him on his travels, nursed him, supported him, contributed to all his work and writings, and, a daughter said, saved his life many times.

“We began to see,” Matt said, “what it’s like for a righteous, humble Christian to endure to the end.”

President Eyring concluded his talk by saying, “I pray that the Holy Ghost will help you with the nostalgia and the feelings of loss, but I pray that he will let you feel the joy and the power of what he’s now doing and will do.”

“Because Christ broke the bonds of death through His Resurrection,” he said, “death cannot conquer my hero, my dad, again.” 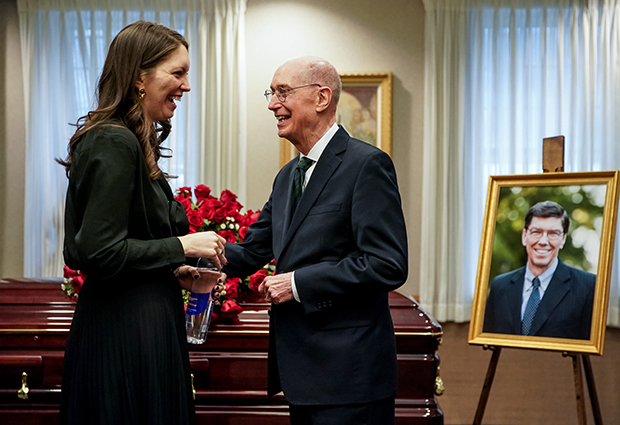 President Henry B. Eyring, Second Counselor in the First Presidency of The Church of Jesus Christ of Latter-day Saints, right, greets Kate Christensen during a viewing before the funeral of her father, Clayton Christensen, at a Cambridge, Massachusetts, chapel on Saturday, February 1, 2020. Photo by Spenser Heaps, Deseret News.

Here is the full letter from the First Presidency to Christine Christensen:

“Dear Sister Christensen, we express to you and your family our heartfelt sympathy the passing of your beloved husband and our friend, Clayton Magleby Christensen. At the same time we rejoice with you in his life of devoted service. Brother Christensen’s life was a model of diligence, personal integrity, and commitment to righteous living. His dedication as a husband, father, grandfather, educator, author, researcher, and stalwart servant of the Lord influenced the lives of loved ones and countless others.

“We are confident your family members will take comfort in the quality of his life and in the memories you share of his abiding love for his family, his lifelong efforts to help others, and his deep-rooted testimony of the gospel. We appreciate Brother Christensen’s dedicated service in the Church as a missionary, bishop, and Area Seventy. His strong faith led him to share courageously with his fellow man his love for the Lord. His brilliant mind and many talents in strategy and innovation were of great professional significance. He taught others in word and deed the enduring importance of a life filled with purpose and meaning.

“We gratefully acknowledge your influence and loving support in all he accomplished. The Savior knew the sorrow we would experience when our loved ones depart this earth. Brother Christensen has returned home to our loving Father in Heaven. Although there is no substitute for the love and devotion of a dear companion, we pray you will receive the comfort and peace in the Savior’s promise, ‘Peace I leave with you, my peace I give unto you: not as the world giveth, give I unto you. Let not your heart be troubled, neither let it be afraid’ (John 14:27). With love and kind personal regards, Russell M. Nelson, Dallin H. Oaks, and Henry B. Eyring.” 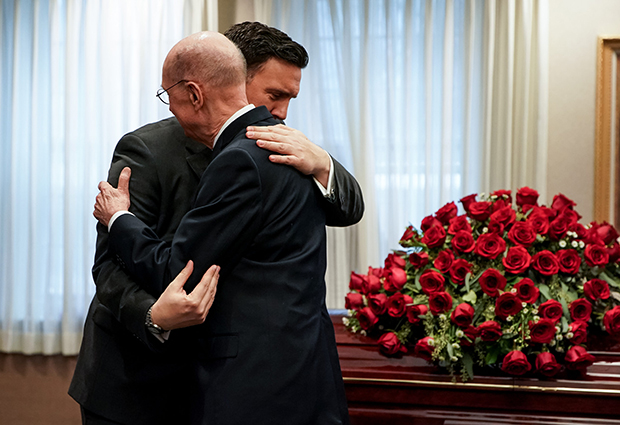 President Henry B. Eyring, Second Counselor in the First Presidency of The Church of Jesus Christ of Latter-day Saints, right, greets Michael Christensen during a viewing before the funeral of his father, Clayton Christensen, at a Cambridge, Massachusetts, chapel on Saturday, February 1, 2020. Photo by Spenser Heaps, Deseret News. 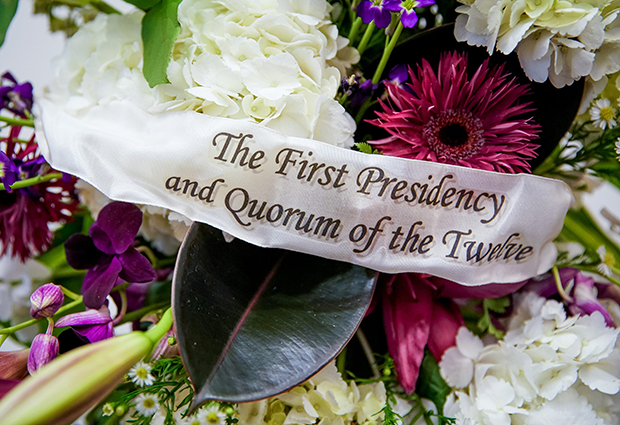 Flowers sent by the First Presidency and the Quorum of the Twelve Apostles of The Church of Jesus Christ of Latter-day Saints are displayed before the funeral of Clayton Christensen at a Cambridge, Massachusetts, chapel on Saturday, February 1, 2020. Photo by Spenser Heaps, Deseret News.