President Henry B. Eyring of the First Presidency and Elder Gary E. Stevenson of the Quorum of the Twelve Apostles greet local leaders at a North Carolina Charlotte Leadership Conference on November 16, 2019.

“All of the changes in the Church that appear to be mostly structural have the possibility of touching more lives with the gospel of Jesus Christ. . . . The purpose is to bless people’s lives.” —President Henry B. Eyring

In the closing moments of Saturday’s Charlotte leadership conference, an elders quorum president who had joined the Church just three years ago stood and asked a question of President Henry B. Eyring.

What advice, the man asked, would a member of the First Presidency have for a fairly new Latter-day Saint striving to minister to the fellow members of his quorum.

“Love the people and pray for them,” answered President Eyring. “The Lord will tell you what to do.”

President Eyring’s message to utilize the initiatives and programs of the Church to care for “the one” anchored Saturday’s meeting of priesthood, Relief Society, and other local leaders serving in western North Carolina congregations.

Hundreds arrived early Saturday morning to claim a good seat and learn from President Eyring, Second Counselor in the First Presidency, and Elder Gary E. Stevenson of the Quorum of the Twelve Apostles.

Prior to the almost-three-hour training meeting at the Charlotte Central Stake Center—which was followed by a priesthood leadership conference—the Brethren shook hands with the attendees.

With each handshake, President Eyring looked each one of his new friends in the eyes—“and I felt the Lord’s love for you,” he said.

“I know you could feel an abundance of the Spirit this morning.”

President Eyring, Elder Stevenson, and the other Brethren also participated in an afternoon missionary meeting with elders and sisters serving in the North Carolina Charlotte Mission. Again, the Brethren shook every hand.

The work of the latter-day Apostles is not limited this weekend to North Carolina, noted Elder Stevenson. Similar apostolic witnesses were being shared across the globe. 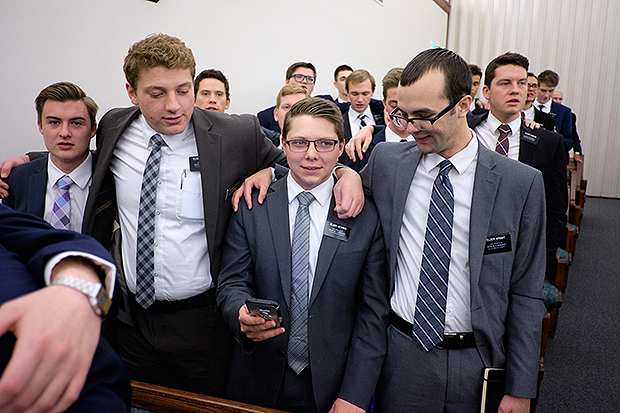 Ministering to others is a precious gift and opportunity, said President Eyring during his remarks. He can’t recall many of the meetings and procedures during his service as a bishop decades ago.

“But I remember how much I loved the people,” he said. “What the Lord wants us to do is help people.

Satan, he warned, is trying to take people down. The organizational changes that are happening in the Church are all designed to protect the Lord’s children. And every leader is charged with answering a similar question: “What can I do to help the Savior have people come unto Him.”

In his Saturday-morning message, Elder Stevenson referenced President Nelson’s observation that the Church is filled with ordinary people performing extraordinary things. “Once called, we must do everything we can to fill the gap between ordinary and extraordinary.”

Today’s Latter-day Saints live in both “perilous times” and the “fullness of times.” A living prophet such as President Nelson offers direction that one can use to navigate through peril.

Elder Stevenson listed the many changes that have occurred in the Church in recent years. He referenced the Church’s soon-to-be-implemented program for children and youth that will promote growth through gospel learning, service and activities, and personal development.

Recent organizational changes will strengthen young men and young women. The focus of all such changes is the work of salvation.

“The bishops and bishoprics are taking a greater role and focus with the youth,” he said.

In his Saturday-morning remarks, Elder Montoya utilized the Church-produced “Come and See” video to demonstrate the simplicity of sharing the gospel and ministering to others.

“We have so many friends that we can share the gospel with—we just need to love them.”

He remembered being a young missionary and writing to a nonmember friend—inviting her to “come and see” the restored gospel. The young woman accepted his invitation to attend Church. Soon she was sharing her teaching skills in Primary and other classes. Eventually, she listened to the message of the missionaries and was baptized.

Today, that friend who Elder Montoya invited to “come and see” is his wife, Sister Maria del Carmen Montoya.

Elder Harding taught the importance of appropriately delegating in order to be most effective in one’s calling.

Prayerful ministering interviews, he added, can help members have a “higher and holier” experience caring for others in the ward.

Each of the Saturday leadership conferences opened time for question-and-answer periods from the congregation for the visiting Brethren. The Charlotte-area leaders posed a variety of queries on subjects such as working with youth, supporting young single adults, and the nature of revelation. 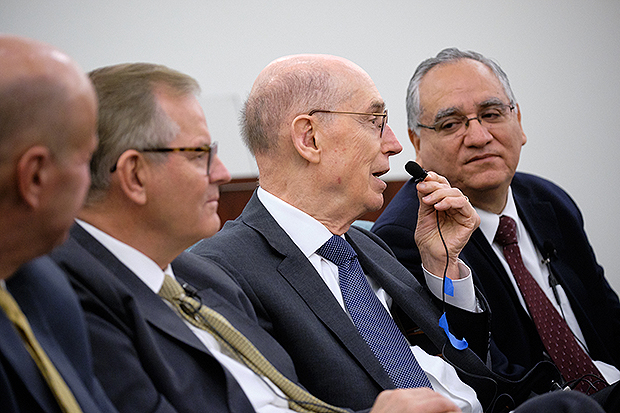 President Henry B. Eyring, second from right, responds to a question during the November 16, 2019, North Carolina Charlotte Leadership Conference. He was joined on the panel by, from left, Elder Matthew Harding, Elder Gary E. Stevenson, and Elder Hugo Montoya.

When one man asked about the possibility of a temple being built one day in Charlotte, President Eyring answered, “The Lord decides—and he has reasons that we don’t really know.”

Following Saturday’s leadership trainings, President Eyring, Elder Stevenson, and the other Brethren spoke with the Church News about being with Latter-day Saints in western North Carolina.

There is much discussion in the Church about ministering and changes, said President Eyring.

“But what we are really talking about is touching people’s lives. All of the changes in the Church that appear to be mostly structural have the possibility of touching more lives with the gospel of Jesus Christ. . . . The purpose is to bless people’s lives.”

Elder Stevenson spoke of “pure religion” as described by James: “Pure religion and undefiled before God and the Father is this, To visit the fatherless and widows in their affliction, and to keep himself unspotted from the world” (James 1:27).

“That’s the message we are still giving,” he said. “Pure religion is extending ourselves to those in need. The fatherless and the widows symbolize those who are in deep need.”

The work of salvation, added President Eyring, extends to those beyond the veil.

And the work, he promised, continues. “It’s going to get better. That’s what we mean by continuing revelations. You know things are going to improve.”

President Eyring said his apostolic charge to take the gospel to the world is joyful work.

“This is an opportunity that I could not have imagined I’d ever have,” he said. “I don’t feel it’s a duty. It’s a privilege. I think all of my Brethren feel the same way. It’s a blessing—not an obligation.”

His Saturday in North Carolina was enriched with the Tar Heel State’s trademark hospitality.

“These are great people,” he said. “We are blessed to come and serve them. They are blessing us.” 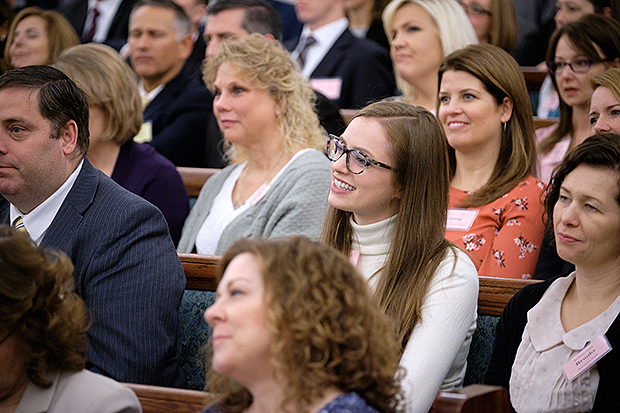 “He knows your name . . . , and He sends us the Holy Ghost. The Holy Ghost then speaks to us in a way that is very personal.”

President Eyring spoke of being a little boy and attending a Church meeting in a rented hotel ballroom in New Brunswick, New Jersey. Young “Hal” Eyring was restless that day and was having trouble keeping still. He was sitting backwards in his chair with his back to the speaker and was paying little attention to what was being said from the pulpit.

Then, unexpectedly, the Holy Ghost prompted him to sit straight and listen.

President Eyring said he is not certain who was speaking, “but I was told it was a prophet of God.”

Hundreds participated in Sunday’s stake conference, and many arrived hours early to claim a good seat in the chapel. When the chapel overflow filled to capacity, families filed into the Relief Society room and other rooms to view the conference on closed-circuit television.

Meanwhile, volunteers in minivans shuttled conference goers back and forth from nearby parking lots being utilized to accommodate the large crowds.

The Charlotte stake center—just like that rented New Jersey ballroom decades ago—“is a special place today,” said President Eyring. It was a place being visited by the Spirit.

President Eyring said some gathered in the stake center are facing difficulties. They are praying for guidance and relief. They are asking for help.

“God will not give you everything you ask for. He cannot, because sometimes things have to happen for reasons that we can’t explain. But I’ll tell you this: You can ask Him to change your heart, and He will help you.”

Remember to follow President Nelson’s counsel to repent daily. Pray to the Lord to know what to do better.

Many of the hymns of the Church—such as “I Need Thee Every Hour”—are actually prayers of faith and supplication. President Eyring spoke tenderly of his wife, Sister Kathleen Eyring, who is enduring the challenges of age. She no longer speaks.

But the Eyrings begin and end every day with a song. Recently, they chose “I Need Thee Every Hour” (Hymns, no. 98).

“The only word she spoke that day, after the song was over, was ‘Yes. Yes.’”

All prayers—be they uttered out loud, whispered in the heart, or delivered through song—go to heaven.

“There is a God. There is a Jesus Christ. And there is a Holy Ghost. And [the restored gospel] is the only place where the priesthood of God is exercised.”

Always strive to draw closer to God and become more like Him, President Eyring added. The result will be more joy, light, and peace.

“You can become more like Him: more kindly, more concerned for others, less selfish, and braver than you have ever been.”

Elder Stevenson said as he left his hotel and walked into Charlotte’s crisp November air, the words of the popular song came to his mind: “Nothing could be finer than to be in Carolina in the morning.”

“That is really how we feel, brothers and sisters,” he said. “Our time here since we arrived has been just spectacular.”

It’s been joyful traveling with President Eyring, he added. The longtime member of the First Presidency has had “a unique ministry” serving in the Presiding Bishopric, in the Seventy, in the Quorum of the Twelve Apostles, and as a counselor to three Church Presidents—President Gordon B. Hinckley, President Thomas S. Monson, and now President Russell M. Nelson.

“He comes with a rich, deep, and unique ecclesiastical background. And you know that when you hear President Eyring speak, he brings the Spirit with him in such a beautiful and humble way.”

The fast-approaching year of 2020 is just weeks away, commencing the 200th anniversary of the Restoration of Christ’s Church, said Elder Stevenson.

Young Joseph Smith’s vision of the Father and the Son ushered in the dispensation of the fullness of times. The heavens were again open for revelation, and the Church was organized as it was once established by Jesus Christ.

“The Holy Ghost,” said Elder Stevenson, “is one of the great blessings we have as Latter-day Saints.”

Focusing his message on the children gathered inside the stake conference, he testified of the many blessings available through the Holy Ghost.

“The Holy Ghost will help you, young children. As a member of the Godhead, the Holy Ghost communicates to us. As you pray to Heavenly Father in the name of Jesus Christ, your prayers can be answered through the Holy Ghost.

Elder Stevenson concluded with his own testimony of the Holy Ghost, along with the Father and the Son.

“The Holy Ghost can be your constant companion.”

Other messages and testimonies Sunday were shared by Kendra Henderson, a convert who was recently sealed to her family in the temple, along with Charlotte North Carolina Central Stake president Steven J. Page and President Detlef H. Adler and Sister Jutta Adler of the North Carolina Charlotte Mission.