President Henry B. Eyring addresses Women’s Conference attendees in the BYU Marriott Center on May 3, 2013.

“The Lord protects, guides, and watches over those who are His trusted friends in His work.” —President Henry B. Eyring of the First Presidency

There are physical and spiritual dangers for Latter-day Saints and their loved ones, President Henry B. Eyring said during Women’s Conference at BYU May 3, 2013.

“[That] has been true for most of the world’s history from the Fall of Adam and Eve and their journey out of the Garden of Eden,” said the First Counselor in the First Presidency. “We will need divine protection in our journey through this last dispensation as it moves toward its climactic end.”

President Eyring spoke at the concluding session of the annual conference, which attracted Latter-day Saint women from across the United States and from numerous foreign countries and is cosponsored by BYU and the Relief Society.

Speaking to thousands gathered in the BYU Marriott Center on the topic “Divine Protection,” President Eyring said he recently received a message from a young mother who wrote, “There have been so many tragedies lately. Is there anywhere we can feel safe?”

“She seemed to be concerned primarily about physical dangers for her family,” he said. “Yet many others feel as well the increasing influence of the adversary of our souls in the world around us. The greater hazards in our journey home to our Heavenly Father are that we and those we love might not be sanctified and purified and therefore not able to be there together.”

Quoting the conference theme, “Therefore, continue your journey and let your hearts rejoice; for behold, and lo, I am with you even unto the end” (D&C 100:12), President Eyring said his message is that “we can have confidence and a sure expectation of joy.”

He told the women that they can claim the assurance of divine help given in the scripture to Joseph Smith and Sidney Rigdon.

“It is a promise to them and to us,” he said. “The trials we will face are unique for us. Yet what the Prophet and Sidney Rigdon were taught as they began their missionary journey from Kirtland [Ohio] in October of 1833 can be for us a guide to the Lord’s loving protection as we pass through the tests of mortality that will lie before us.”

A key to understanding why the Lord could promise an assurance of protection, and even joy, lies in the motives that led Joseph and Sidney to choose their journey, he said.

“Joseph had preached to the members of the Church that the gospel of Jesus Christ must be taken to the entire world. He had called and sent out missionaries. The Lord then inspired the Prophet to do what he had taught. He was directed to go on a mission to the East and then to Canada. He chose to obey that command to proclaim the gospel message full of faith and hope, as if there were no storm clouds in the sky.”

But there were great difficulties facing him and the Church, President Eyring said.

“Joseph and Sidney had chosen to follow the Lord’s command with resolute determination whatever the consequences,” he said. “The Lord gave the promises of protection and succor they needed and that you and I will need for ourselves and our loved ones.”

The lesson of where to find safety seems clear, he added. “The Lord protects, guides, and watches over those who are His trusted friends in His work. His work and that of His Father and our Father is to bring to pass the immortality and eternal life of the children of God. And Satan, the enemy of our happiness, opposes those who serve the Lord.”

Yet the promise of the Lord’s protection is real and His power is greater than all the forces that oppose His faithful servants, President Eyring said. “He watches over them. He sends help to strengthen and sustain them. I have seen it for myself as you have. The Lord knows both the hearts and the needs of His friends who are on His errands.”

President Eyring said the Lord protects His faithful servants against the temptation to be discouraged or afraid in ways fitted perfectly to their needs. “Always it seems to me he sends the Holy Ghost and trusted friends.”

Speaking of his granddaughter who is serving a mission, President Eyring said her letters might be a lot like letters sent by other sister missionaries. 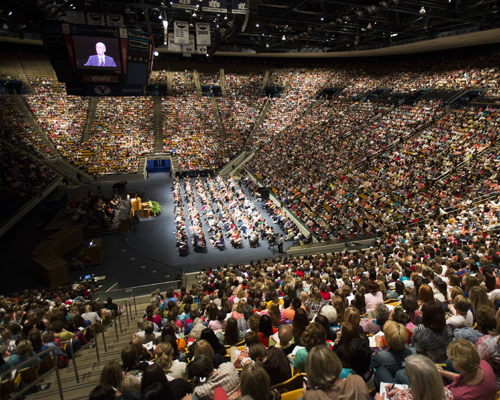 “They are filled with joy,” he said. “The Lord is protecting her from fear and discouragement by the way He inspires her to see her experiences. For instance, she is grateful that she can’t understand enough of the language to know what angry people are shouting at her on the street.”

Some may wonder why the Lord is not giving her the gift of tongues, he continued. “As nearly as I can tell, He has done something more precious. … That purpose was to have missionaries teach by the Spirit whatever will touch and convert people. It is the gift of the Holy Ghost in action.”

President Eyring said his granddaughter is blessed and protected by that gift of the Spirit. “As she testifies for the Lord with whatever faltering words she is given, the Holy Spirit will come to be her companion,” he explained. “The Spirit will warn her away from danger. It will guide her to those who are looking for the truth even when they don’t yet know that they want it.

“The gift to speak a language will come to her in time. But of greater worth, the influence of the Holy Ghost will cleanse, purify, and sanctify her. And she will feel by the Spirit that the Lord watches over her, knows her heart, and that she is under the protection of His power. That will banish fear and dismiss discouragement quickly when it comes, as it will come.

President Eyring said the Lord prepares friends to help His children through challenges they will have in the future.

“More than you may know, you are part of the Lord’s promise to go with His servants on their challenging journeys in life,” he concluded. “He sends friends. He sends the Holy Ghost to you and through you to the people He loves, watches over, and goes with.”