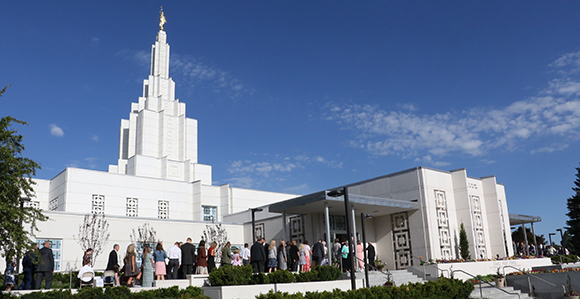 Crowds file into the Idaho Falls Idaho Temple for a rededication session on June 4, 2017.

It was June 5, 1976, and President Henry B. Eyring and his wife, Sister Kathleen Eyring, were at the Idaho Falls Idaho Temple attending the wedding of some young friends.

It was a joyous occasion. But as the Eyrings were leaving the temple they learned troubling news.

“The temple matron whispered to my wife, ‘The Teton Dam has broken and a wall of water is heading toward Rexburg,’” he told the Church News.

The Eyrings had reason to be worried. They lived in Rexburg, and their children had remained at home while they visited the temple.

The Teton Dam break was so treacherous that the police did not allow the Eyrings to make the short drive home to Rexburg. They had no choice but to find overnight lodging in an Idaho Falls motel.

Despite the uncertainty, President Eyring slept well that night. The Idaho Falls Temple had taught them the comforting lessons of family and eternity.

“I knew it was going to be okay,” he said. “Those feelings that we had in the temple were real. We knew those children were ours. That night we had a feeling of peace.”

President Eyring is just one of the many Latter-day Saints who have found peace, comfort, and life-guiding instruction within the walls of the Idaho Falls Idaho Temple.

Dedicated in 1945, it was the Church’s eighth temple and the first such edifice in Idaho. It remains one of the most easily recognizable LDS temples because of its mixed-Art Deco exterior, proximity to the Snake River, and, of course, the eponymous falls.

But in 2015—after seven decades of daily service—Church officials decided to close the Idaho Falls temple for extensive renovations.

Now the “Temple by the River” is back.

On June 4, President Eyring and many others participated in the much-anticipated rededication of the Idaho Falls Idaho Temple. The building was rededicated in three sessions on a warm late-spring Sabbath day.

“This is our temple”

Jerrold and Ruth Stallings were counted among the thousands Sunday who attended a rededication session inside the temple or at area meetinghouses, via closed circuit broadcast.

The Stallings are veterans of Idaho Falls temple dedications. They were seated inside the white-stone edifice on September 23, 1945, when it was dedicated by President George Albert Smith.

Now both 86, Brother and Sister Stallings don’t recall much that was said in that first dedication—but they will never forget what they felt.

“It was so exciting to see the temple finished following World War II,” said Sister Stallings, who still has her blue ticket to the dedication. “We were so happy to finally get our temple.”

The two Idaho natives were teenagers when they attended the 1945 dedication. They didn’t know one another. But years later they became acquainted, married, and decided to raise their family of seven in nearby Ammon.

The Idaho Falls Temple became their guiding watchtower. “As we were raising our family we tried to regularly attend the temple,” said Brother Stallings.

Idaho Falls-area members such as the Stallings say they're blessed to have multiple temples within driving distance. “But this is our temple,” said Sister Stallings.

Seeing their temple rededicated and listening to the counsel of their leaders left them overjoyed.

“The Brethren want us to be happy,” said Brother Stallings. “They want us to be with our families and go to the temple. They know that’s what can make us happy.”

The 72-year-old Idaho Falls Idaho Temple was closed to allow for mechanical and electrical systems upgrades and to make seismic improvements.

The temple’s iconic murals—located in the baptistry, the grand hall, the creation room, the Garden of Eden room, the world room, and the celestial room—were also cleaned and restored.

Other highlights of the renovation include new interior glass, stone, wood, and metal work that is harmonious with the geometric, square designs defining the temple’s exterior.

Even the statue of the angel Moroni—attached to the temple’s steeple in 1982—enjoyed a timely makeover. The statue was removed for a short time so a craftsman could apply a fresh layer of gold leaf.

While a few new conifer and deciduous trees were planted during the renovation, most of the existing landscaping was preserved. Even in the early June heat, patrons can find relief in the shade of one of the temple ground’s many towering trees.

Renovation workers “have found a way to keep it simple but magnificent,” said President Eyring.

The building’s exterior and interior features, he added, suggest ascension to the heavens. “There is a feeling of being lifted. 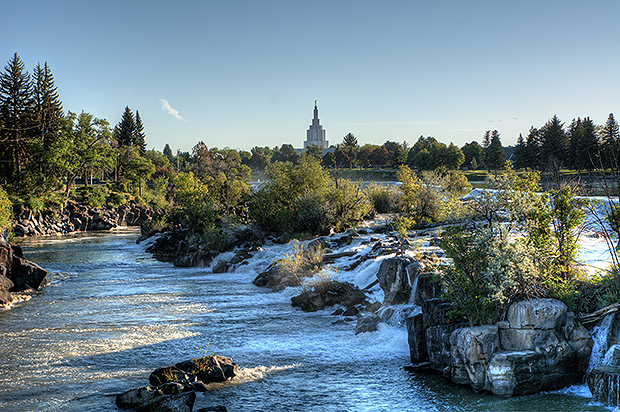 The Idaho Falls Idaho Temple with the Snake River in the foreground.

A place of sacred steps

Elder Ronald A. Rasband of the Quorum of the Twelve Apostles joined President Eyring at the June 4 rededication. Just days earlier he had visited the construction site of the far-away Durban South Africa Temple.

Palm trees are being planted around the exterior of the future temple. They are symbols of hope and future growth. For now, the Durban saplings differ dramatically from the massive mature trees found outside the Idaho Falls Temple.

Elder Rasband said those deep-rooted trees represent multiple generations of Latter-day Saints whose lives were fortified and protected by the Idaho Falls Temple.

The rededication signals a continuance of such protection.

“There will be many young families and couples that will come here and build their future,” he said. 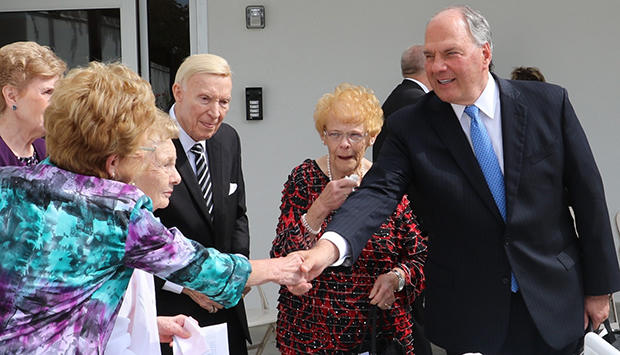 Elder Ronald A. Rasband greets folks who participated in the June 4, 2017, rededication of the Idaho Falls Idaho Temple.

On the day before the rededication, Bishop Dean M. Davies, First Counselor in the Presiding Bishopric, told the Church News that the recent renovation honors the temple’s sacred past—while securing its operational future.

“This building will serve people here for years to come,” he said.

“The priesthood power that is promised in the temple for our posterity is represented in so many ways by this temple,” he said.

“And I’ve been here with my sweetheart many times,” he said, smiling.

But as much as President Eyring reveres this temple’s illustrious past, he is most enthused envisioning its future.

“This is a place where you can take the steps that lead to eternal life and a return home again to our Heavenly Father.” 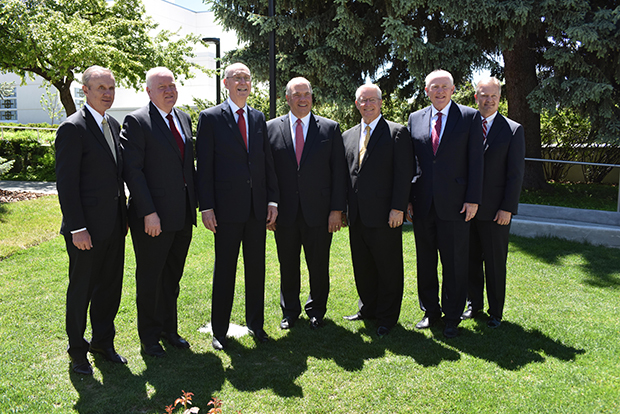 President Henry B. Eyring was joined for the cultural celebration and the three rededicatory sessions for the Idaho Falls Idaho Temple, June 3 and 4, 2017, by other General Authorities. From left to right, Elders Bradley D. Foster and Wilford W. Andersen of the Seventy; President Eyring; Elder Ronald A. Rasband of the Quorum of the Twelve Apostles; Bishop Dean M. Davies, First Counselor in the Presiding Bishopric; Elder Richard J. Maynes of the Presidency of the Seventy; and Elder K. Brett Nattress of the Seventy. 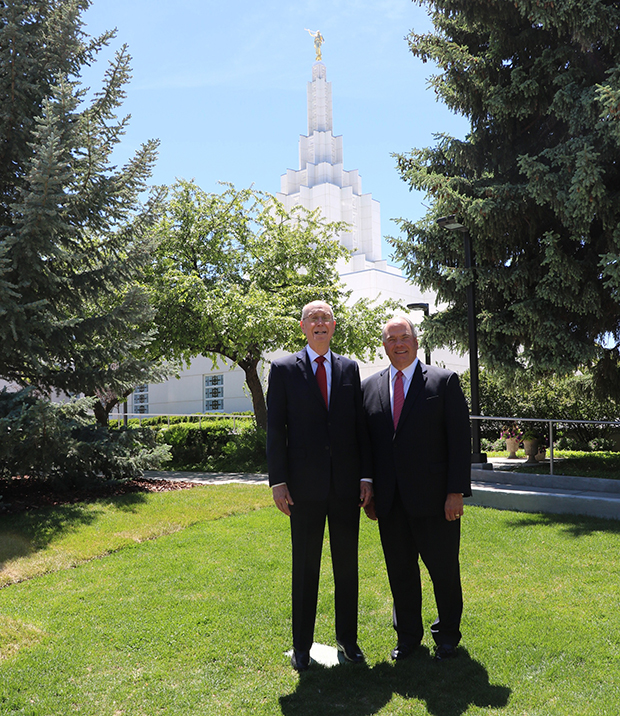 President Henry B. Eyring of the First Presidency, left, presided over the June 4, 2017, rededication of the Idaho Falls Idaho Temple. He was joined at the rededication by Elder Ronald A. Rasband of the Quorum of the Twelve Apostles. Photo by Jason Swensen. 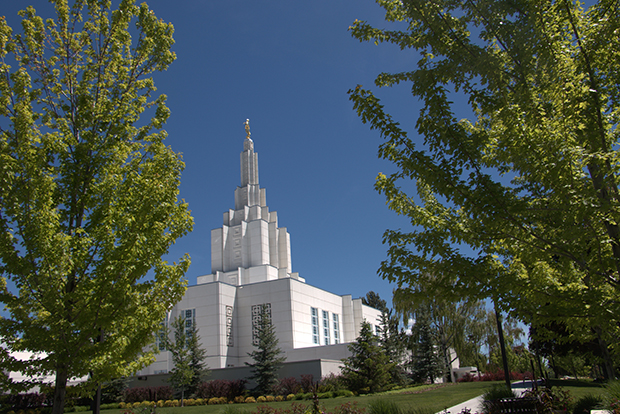 The iconic Idaho Falls Idaho Temple was the Church’s eighth temple and the first such edifice in Idaho. Photo by Jason Swensen. 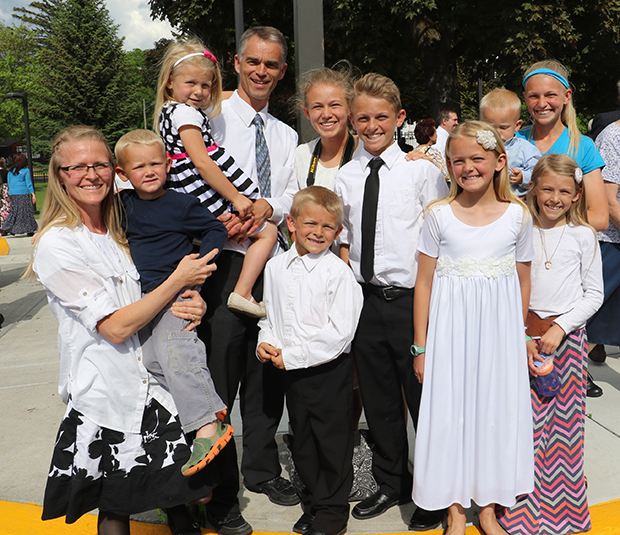 Members of the Harrison Familly from Idaho Falls wait outside the temple to wave goodbye to President Henry B. Eyring. Photo by Jason Swensen. 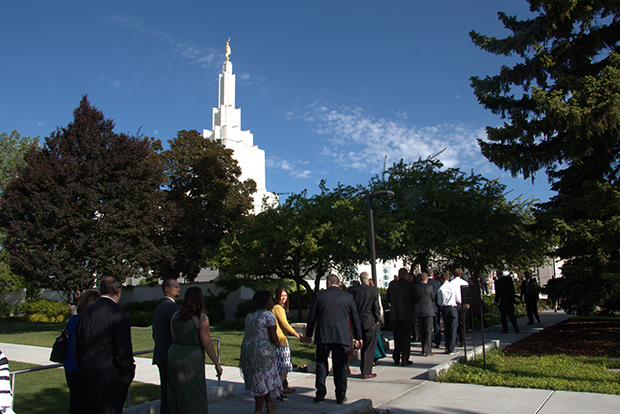 Members line up outside the Idaho Falls Temple to attend a rededication session on June 4, 2017. Photo by Jason Swensen.

Elder Ronald A. Rasband greets folks who participated in the June 4, 2017, rededication of the Idaho Falls Idaho Temple. 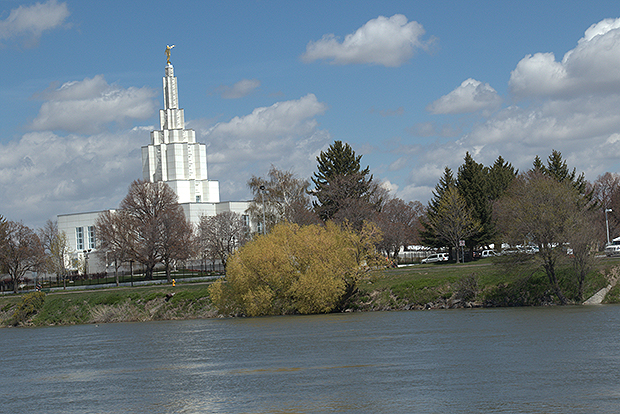 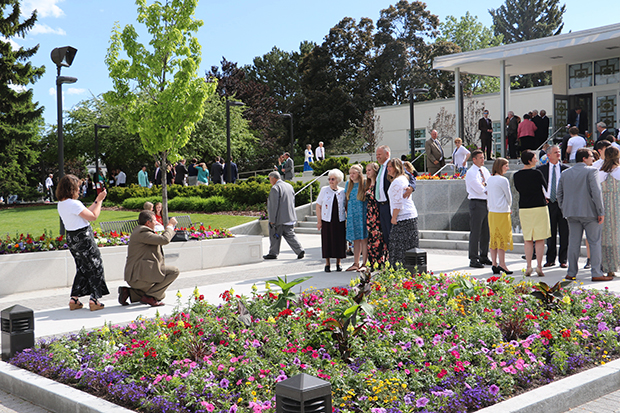