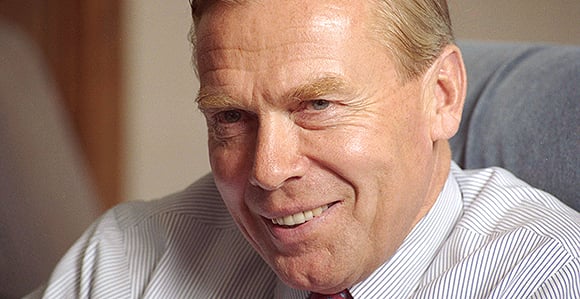 Sitting in his office at the Church Administration Building, President M. Russell Ballard holds a worn and heavily marked set of scriptures—bound together with two rubber bands—and talks about his friend Jon M. Huntsman Sr.

It is hard to say everything about Huntsman’s service to his family and the Church and his work as an international businessman and philanthropist, said President Ballard, Acting President of the Quorum of the Twelve Apostles.

But, he adds as he holds up Huntsman’s scriptures, which he borrowed from the family to use in his funeral address, “This says a lot.”

Married to Karen Haight Huntsman—the daughter of Elder David B. Haight of the Quorum of the Twelve Apostles and Sister Ruby Haight—Jon Huntsman was the father of nine children.

“We share today in the grief of the Huntsman family,” wrote the First Presidency in a statement. “We honor Jon as a cherished husband, father, and friend, esteemed as a leader for his exceptional capacity, commitment, philanthropy, and service throughout the world. We express our love to Karen, to their children, and family. Jon’s legacy of faithful leadership, generosity, and goodness stands as a beacon for the entire Huntsman family and many others throughout the world.”

Huntsman, a former Area Seventy, stake president, and mission president in Washington, D.C., was a “strong, powerful, fair businessman” whose “word was his bond,” said Elder Ronald A. Rasband, the former president and chief operating officer of Huntsman Chemical Corporation and now a member of the Quorum of the Twelve Apostles.

He traveled with Huntsman across the globe. Wherever he went, Huntsman always carried his worn and marked scriptures with him, said Elder Rasband.

Elder Rasband met Huntsman in the mid 1970s when the pair worked together in a married student ward at the University of Utah. Huntsman was the high councilor assigned to the ward; Elder Rasband was the elders quorum president. The relationship between the pair—that would lead Elder Rasband to begin work in 1976 at Huntsman Container Company and ultimately take the helm of Huntsman Chemical Corporation—“began with the Church.”

He learned quickly that his boss expected him to work hard, get results, and be “moral, ethical, and honest.”

Even then Huntsman was generous with his means and helped ward members with the instruction that they never know where the gift came from, said Elder Rasband. At a time when the Huntsmans didn’t have a lot of money, “I saw his generosity in person,” he said.

In addition, the Huntsmans made it possible “for the Presidents of the Church to visit Saints who had never seen a prophet” in remote locations across the globe by making their private jet available to President Gordon B. Hinckley and President Thomas S. Monson, said President Ballard.

Jon Huntsman also had a special relationship with President Howard W. Hunter, who lived in his ward. When one of the three were sick or recovering from surgery, the other two would visit. Often President Hunter, President Ballard, and Huntsman would take a ride together to buy a frozen yogurt.

Both President Ballard—whose daughter, Brynn, is married to Peter Huntsman—and Elder Rasband said Huntsman had the ability to compress two days work into one day.

He accomplished this despite dealing with an autoimmune disorder and several forms of cancer, said President Ballard, noting Huntsman was often in severe pain. “I can’t remember many days when he didn’t have some health issue,” added Elder Rasband.

Ralph Hardy, who worked with Huntsman professionally and served with him when both men were Area Seventies, said Huntsman’s accomplishments cannot be understated. “He started a company from scratch” that resulted in 15,000 employees and plants all over the world.

He said over the years he observed, in both his Church and professional work, a constant. Huntsman, he said, was always busy and running for a plane. But he always made time to check in with his wife, sometimes multiple times in a day. “You could see that he had a wonderful relationship and partnership with Karen,” said Hardy.

He also had a special relationship with each of his children and grandchildren, family members say.

Huntsman’s son Peter said his father had the special ability to teach his nine children equally and employ “big picture strategy” at home as well as in his business and Church work. His father believed in working “longer, harder, and stronger.”

Known for his philanthropic donations—he gave away $1.5 billion in his lifetime—Jon Huntsman had three passions: Helping the homeless, promoting education, and finding a cure for cancer. 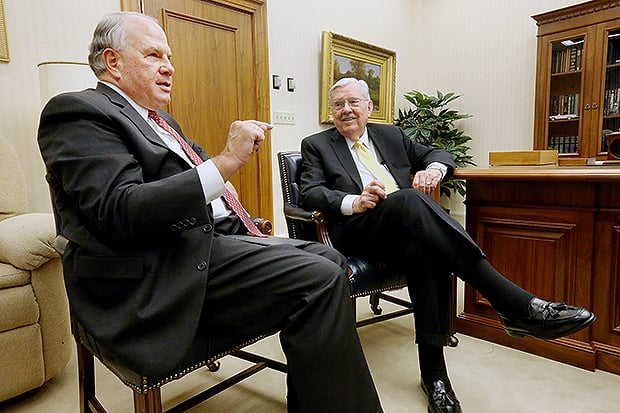 Elder Ronald A. Rasband and President M. Russell Ballard, both of the Church’s Quorum of the Twelve Apostles, talk about Jon Huntsman Sr. during an interview on Tuesday, February 6, 2018. Photo by Scott G Winterton, Deseret News.

A man who was personally involved in his grandson’s mission preparation, Jon Huntsman faithfully attended Church leadership trainings and always felt he had something to learn from any Church leader, even as a global business leader and billionaire.

“He was a genuine believer,” said Peter Huntsman. “He spent 50 years in Church leadership positions.”

As a mission president he could have afforded to buy and drive any car on the market, but instead he drove the mission vehicle—a Chevy Malibu. 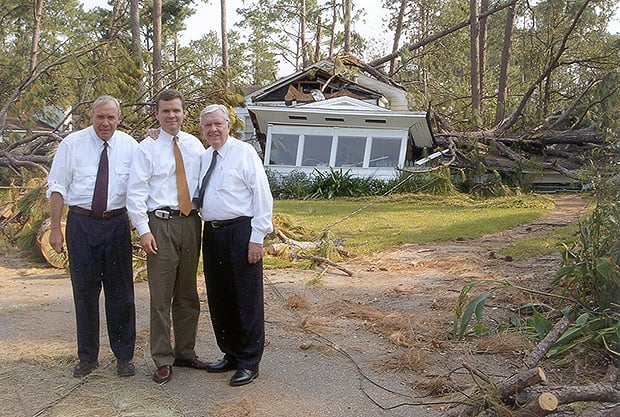 David Huntsman said it is a great privilege to “follow in his father’s footsteps,” to conduct missionary meetings and zone conferences in the same buildings his father did three decades earlier.

David Huntsman said his father “loved to be around people” and found “great strength and happiness” from his associations in the Church.

One of the last times President Ballard and Elder Rasband heard Jon Huntsman offer a Church talk was two years ago during a mission meeting in the Washington D.C. South Mission.

Christena Durham said her father’s religion “was part of him.” 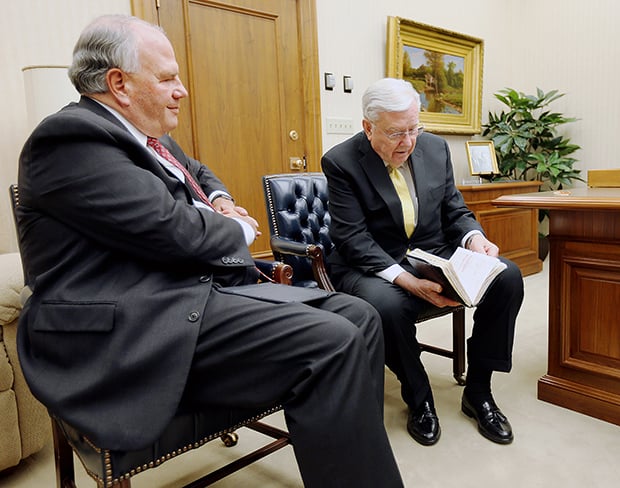 Elder Ronald A. Rasband, left, and President M. Russell Ballard, both of the Quorum of the Twelve Apostles, talk about the service Jon Huntsman Sr. rendered to the Church during an interview at the Church Administration Building in Salt Lake City on Tuesday, February 6, 2018. Photo by Scott G Winterton, Deseret News. 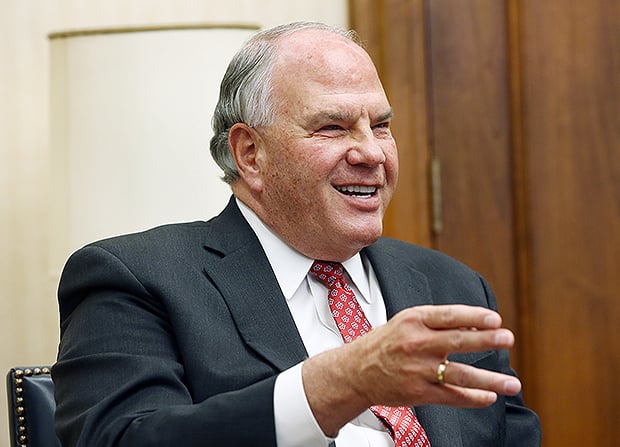 Elder Ronald A. Rasband of the Quorum of the Twelve Apostles speaks of Jon Huntsman Sr. during an interview Salt Lake City on Tuesday, February 6, 2018. Photo by Scott G Winterton, Deseret News. 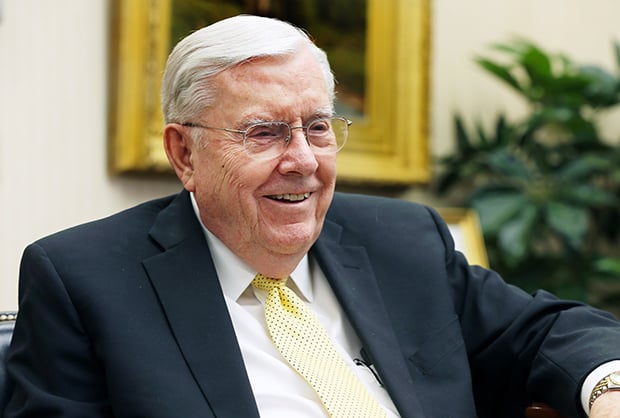 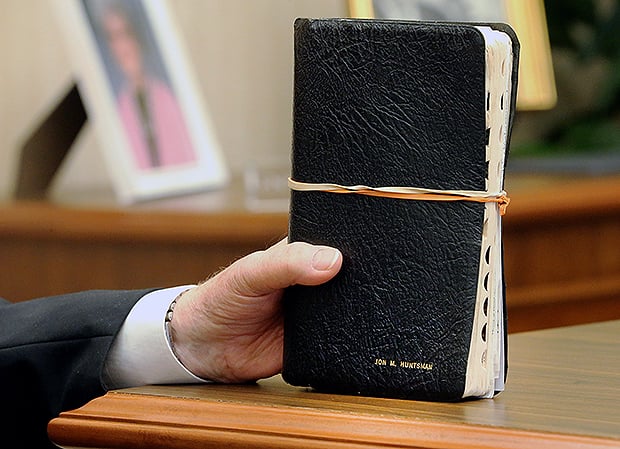 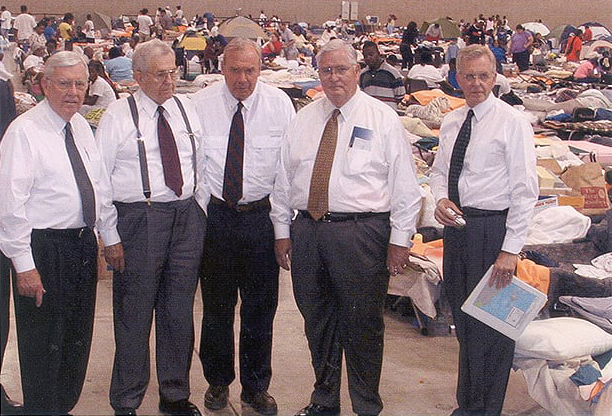 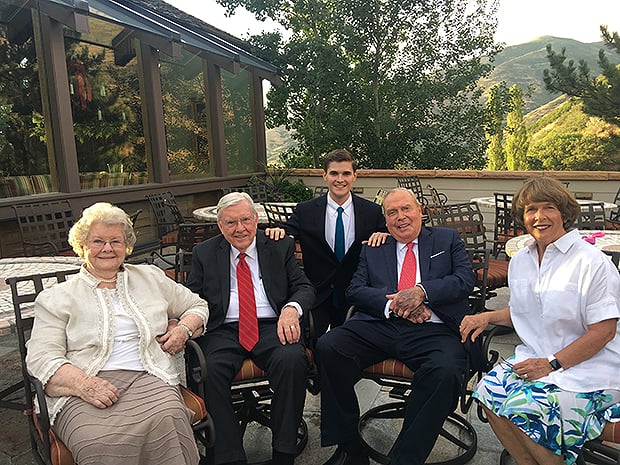 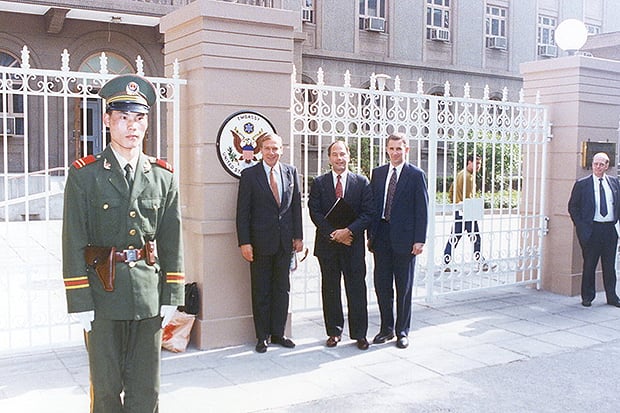 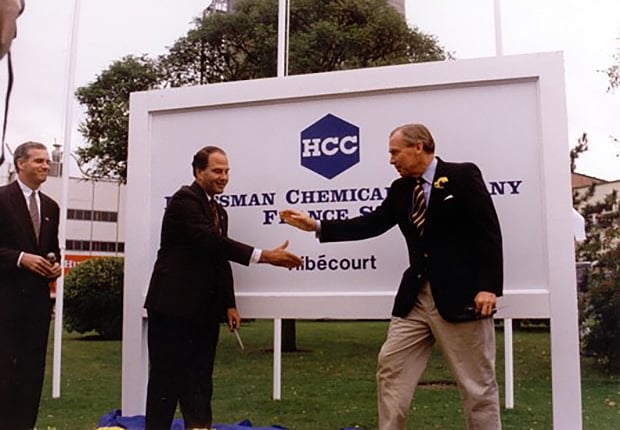