President and Sister Uchtdorf: Seek Blessings of the Temple 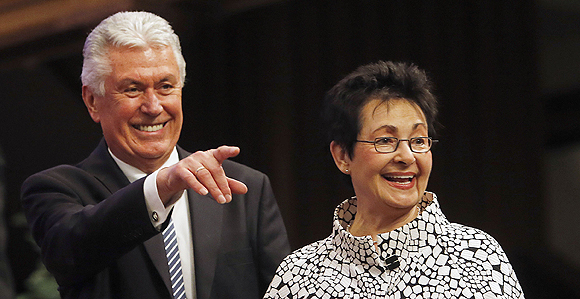 President Dieter F. Uchtdorf and Sister Harriet Uchtdorf acknowledge the congregation prior to speaking about the blessings of the temple at a devotional for workers at the Bountiful Utah Temple on February 9 at the Tabernacle on Temple Square.

“A temple is literally a house of the Lord. A place where the Lord may come, it is the most holy of any place of worship on the earth. Only the home can compare with the temple in sacredness.” —President Dieter F. Uchtdorf of the First Presidency

“People come to the temple for many reasons,” President Uchtdorf said. “Many will come seeking blessings of the Lord, answers to prayer, or knowledge, healing, and peace. Some come with broken hearts, with a prayer on their lips that the Savior’s healing balm will bring peace to their souls. They all come expecting to be lifted up. They come expecting to find the Lord. They come seeking the blessings of God.”

Both President and Sister Uchtdorf spoke of the blessings of the temple, sharing personal experiences and important stories from Church history.

Sister Uchtdorf spoke first about the experience she had attending the temple with her mother and sister when she was a young woman. In 1954, only eight months after her father had passed away from cancer, missionaries visited young Harriet’s home.

“It was during this sad and tender time when the missionaries rang our doorbell,” she recalled. “How grateful we were for their positive and joyful message of the restored gospel of Jesus Christ. The missionaries taught us the merciful plan of happiness and the eternal blessings of the restored gospel—including the principles of temple covenants, temple ordinances, and eternal families.”

At that time, there were no temples in Europe. It wasn’t until a year after her family met the missionaries that the Swiss Temple—the first temple outside the U.S. and Canada—was dedicated in 1955. (Hawaii was a U.S. territory when a temple was dedicated there in 1919.)

“I will never forget the moment when we arrived at the Swiss Temple and I saw it in its full beauty for the first time. The next day, early in the morning, we waited at the temple door to be ready as soon as it opened.”

Sister Uchtdorf added that words couldn’t describe the heavenly family experience she had.

“I had a wonderful, unforgettable spiritual experience coming to the temple for the first time, and especially being sealed as a family,” she said. “We came back to the temple as often as we could. … It was really like a little piece of heaven on earth.”

President Uchtdorf spoke of the legacy and heritage of the Bountiful Utah Temple—the 47th operating temple and eighth temple constructed in the state of Utah.

“The history of this temple site began back in 1897, when John Haven Barlow Sr. purchased 40 acres of land from the United States government,” he explained. “Because of lack of water and the steep terrain, little could be done with the land.”

It was in 1947 that some of the land was cleared for 400 apricot trees to be planted. In the spring of 1983, flash flooding caused a great deal of damage in Bountiful, resulting in the decision to build a dam across the canyon to limit the flow of water during heavy rainstorms.

“The city requested the use of the soil from what would become the future temple site, so construction crews removed over 200,000 cubic yards of soil,” he said. “This left the area an ideal spot on which the temple would later be built.”

On April 3, 1988, the First Presidency decided on the temple site, and on January 8, 1995, President Howard W. Hunter dedicated the Bountiful Utah Temple.

“Two hundred thousand Latter-day Saints attended the dedicatory sessions, more than had ever previously attended a temple dedication,” he said. “Of those participating in the dedication, 67,551 attended at the temple and another 82,174 at the Salt Lake Tabernacle.”

President Uchtdorf said that whenever the Lord has had a people on the earth who will obey His word, they have been commanded to build temples in which the ordinances of the gospel and other spiritual manifestations that pertain to exaltation and eternal life may be administered.

“Building and properly using a temple is one of the marks of the true Church in any dispensation,” he said. “That is why we have 141 operating temples today, located in 42 countries, with 15 more under construction and another 14 announced (total 170). All this is to bless the 15 million members of God’s Church worldwide, with almost 2 million of them living here in Utah.”

“A temple is literally a house of the Lord,” he said. “A place where the Lord may come, it is the most holy of any place of worship on the earth. Only the home can compare with the temple in sacredness.”