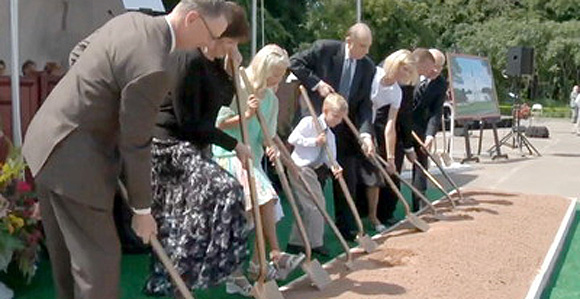 President Thomas S. Monson and members of his family participate in groundbreaking for the Hartford Connecticut Temple on August 17.

Twenty-one years ago, President Gordon B. Hinckley announced plans to build a temple in Hartford, Connecticut.

On a clear and very warm Saturday morning, August 17, his successor, President Thomas S. Monson, broke ground for the site on which the temple will be built.

The lapse in time from the original announcement until the groundbreaking came as plans for the edifice were set aside as temples were built in Boston and New York City.

“Three years ago I had the privilege of announcing that a temple would now be built in this area,” President Monson said as he spoke on the future temple site, which is actually in Farmington, Connecticut, a suburb west of Hartford. “Today is a special and sacred day as we bring to fruition the hopes and dreams of the Church members here and break ground for the Hartford Connecticut Temple.”

Speaking of the rich LDS history in the area, President Monson noted that missionary work in Connecticut began in 1832 when Orson Hyde and Samuel H. Smith went to Litchfield and Hartford Counties.

One of the early missionaries in the area was Wilford Woodruff, who was born in 1807 in what is now Avon, Connecticut. Baptized in 1833, he served 50 years in the Quorum of the Twelve Apostles. In 1889, he became the Church’s fourth President.

President Monson noted that, in addition to being one of the greatest LDS missionaries—having served six missions and baptizing more than 1,800 people—President Woodruff incorporated the Genealogical Society of Utah, which would later become the largest repository of family history research in the world.

“He left for us a legacy of missionary work and temple work which cannot be measured,” President Monson said.

“I believe that our Heavenly Father will permit those early missionary pioneers, including President Wilford Woodruff and others who helped bring the Church to this area and who have now gone beyond the veil, to be present on this sacred occasion, for temple work is truly not only for time; it is for eternity.”

President Monson said that each of the Church’s temples “is an expression of our testimony that life beyond the grave is as real and as certain as is our life here on earth.”

Elder William R. Walker of the Seventy and Executive Director of the Temple Department, who conducted the ceremony to dedicate the temple site, explained that proceedings were broadcast to chapels throughout the temple district. Attendance in person at the site was limited, he said, so that the neighborhood wouldn’t be overwhelmed by traffic.

Elder Walker noted that Wilford Woodruff was born about four miles from the site of the future temple and then said, “President Woodruff declared, ‘These temples that we have built … stand as a monument before God, angels and men, to the faith and works of the Latter-day Saints’” (Deseret Weekly, Aug. 1892).

During the groundbreaking ceremony, President Monson said he has a special love for Connecticut, where he and his wife, Sister Frances Monson, often visited their daughter, Ann, and her husband, Roger Dibb, when they lived in New Canaan from 1982 to 1994. Brother and Sister Dibb’s daughter, Sarah, and son-in-law, Jim Steel, who live in Simsbury, and their three children attended the groundbreaking ceremony. After he gave the dedicatory prayer, members of his family who were present joined President Monson in turning earth to symbolically break ground for the temple.

Others who wielded shovels alongside President Monson were Elder Walker; Monsignor Gerard G. Schmidt of the Catholic Archdiocese of Hartford; Jeffrey J. Hogan, chairman of the Farmington city council; Phillip R. Dunn, a Farmington city planning and zoning commissioner; and local LDS leaders. After the ceremony, members of the audience were invited to take turns to symbolically break ground to mark the beginning of construction on the new temple.

President Monson called on a young boy. Leaning over, he instructed the child, “Hold the shovel. Push it in the dirt.”

As he prepared to leave the site, the audience sang “Happy Birthday “to President Monson; he will turn 86 on August 21.

The Hartford Connecticut Temple is actually located in Farmington, a suburb just west of Hartford, on the corner of Farmington Avenue and Melrose Drive. Because parking was limited on the temple site, attendance at the groundbreaking was by invitation only.

However, Church officials said the proceedings were broadcast via satellite to LDS meetinghouses in the area.

Plans to build a temple in the Hartford area were originally announced in 1992. When a suitable location for the temple could not be acquired, the Connecticut plans were scrapped in favor of new temples in Boston and White Plains, New York.

The Boston Massachusetts Temple, the Church’s 100th operating temple, was completed in 2000. The temple planned for White Plains became the Harrison New York Temple, plans for which were eventually set aside following the completion of the Manhattan New York Temple.

In 2010 President Thomas S. Monson announced that the Church was once again planning to build a temple in the Hartford area, much to the delight of Connecticut’s 15,000-plus Latter-day Saints. The Hartford temple will be the second of its kind in New England and one of 171 LDS temples in use, under construction, or in the planning stages around the world.