The 111 quilts volunteers in California made for refugees during the Chico 4th Ward’s “100 Quilts in 100 Days” project.

“As I watched the news about the refugees unfold, I felt driven to act, but this became something much bigger, involving more people and lasting longer than I could’ve imagined.” —Troy Cline, volunteer

Earlier this year as thousands of refugees fled their homes and poured into countries around the world, Troy Cline, a member of the Chico 4th Ward in Chico, California, wondered how he could help.

When Brother Cline brought up his concerns during a ward council meeting, the council agreed the ward should try to make a difference. Soon after, the ward Relief Society president, Jo Anne Madsen, learned the Humanitarian Center in Salt Lake City needed quilts. “Now, that’s something we know how to do,” said Sister Madsen.

The result was “100 Quilts in 100 Days.” For three months people from multiple wards (including some who are not members of the Church) gathered every Saturday morning to make quilts. Participants included full-time missionaries, a seminary class, the Young Women and Young Men organizations, families, and many individuals. Some volunteers worked at home on quilts while others worked together, visiting and sometimes singing as they sewed.

Ages of participants spanned from 94-year-old Olive Conley, whose keen thread-cutting skills had been honed over her lifespan, to Primary children like Christopher King, age 3, who with other Primary children drew pictures on quilt squares, which were then incorporated into quilts.

Much of the fabric was donated, including 31 bolts given by ward member Jody Taylor, a fabric designer by trade. It took 743.5 yards of fabric, 192 yards of batting, 15 skeins of yarn, 17 trips to the fabric store, and 14 workdays to make 111 quilts in two different sizes.

Troy Cline, whose urge to help had been magnified by the efforts of many, said, “As I watched the news about the refugees unfold, I felt driven to act, but this became something much bigger, involving more people and lasting longer than I could’ve imagined.”

He added that he is especially grateful his young sons—who spent many Saturday mornings sitting under quilt tops “catching” the needles that poked through and sending them back up again—were able to contribute their time and efforts. Brother Cline and his wife, Sarah, have spoken often with their boys about the plight of the refugees in the world and how the quilts they helped to make could make a difference.

A ward activity was held to celebrate the efforts of all who participated in “100 Quilts in 100 Days.” According to Sister Madsen, seeing the quilts on display gave everyone involved a great sense of accomplishment.

At the end of the celebration, the quilts were carefully folded and bagged. Sister Madsen and her husband, Dale, then delivered them to the Humanitarian Center in Salt Lake City. When they arrived, one of the workers said, “Do you have the quilts? We’ve been waiting for you!”

Volunteers spent three months making 111 quilts to donate to the Humanitarian Center in Salt Lake City as part of a refugee relief effort sponsored by the Chico 4th Ward in Chico, California. Photo by Alisa Duenas. 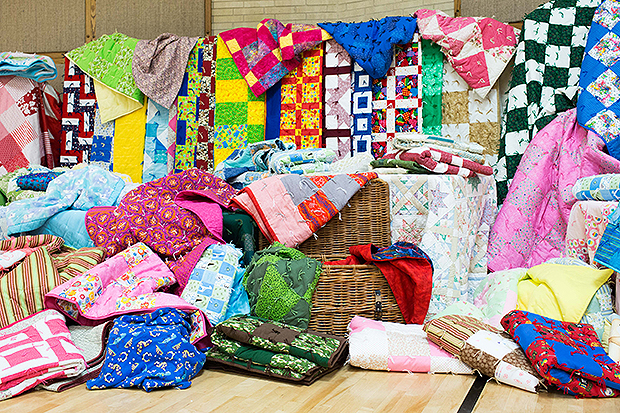