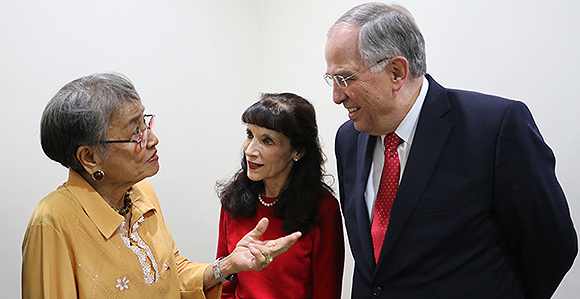 Elder Neil L. Andersen of the Quorum of the Twelve Apostles and his wife, Sister Kathy Andersen, visit with Rufelia Salanged, baptized a member of The Church of Jesus Christ of Latter-day Saints in the Philippines on August 11, 1963. Elder Andersen created the 100th stake in the Philippines on September 10, 2017.

On November 25, 1961, she became the fifth member to be baptized in the country.

Back then, the handful of native Filipino Latter-day Saints met with American servicemen. Although they knew they were involved in something special, early Church pioneers in the Philippines never dreamed that in less then six decades, 100 stakes would dot their land.

Sister Gapiz was part of a capacity congregation that watched on September 10 as Elder Neil L. Andersen of the Quorum of the Twelve Apostles created the 100th stake in the Philippines—the Mandaluyong Philippines Stake.

The stake is created in an area that was part of the first stake in the Philippines, formed in 1973. Members sustained Noel Delos Reyes Placer, Marcial Evangelista, and John D. Bautista to lead the stake.

Held in the Kia Theater in Metro Manila, the creation of the 100th stake marked a historic milestone for the Church and the Philippines—the first nation outside of the Western Hemisphere to experience this level of LDS growth. The Church has only reached the milestone of 100 stakes in four other countries of the world—Brazil, Mexico, the United States, and Peru.

After creating the stake, Elder Andersen praised Sister Gapiz and the generations of faithful Filipino members who followed her.

“You not only embraced the gospel, but you held on to the gospel and you lived your life worthy and true,” he said.

His wife, Sister Kathy Andersen, shared her testimony in Tagalog and then expressed her love for Filipino Latter-day Saints. “We look to your faith and it increases our faith,” she said.

Today there are more than 746,000 members of the Church in the Philippines—a remarkable number considering that the growth in the country occurred in just more than half of a century.

Although the first official Mormon conference was held in the Philippines on May 13, 1945, it was only attended by Latter-day Saints in the U.S. military.

The Philippines wasn’t dedicated for the preaching of the gospel for another decade; on August 21, 1955, then-Elder Joseph Fielding Smith, who became the 10th President of the Church, offered a prayer of dedication on the Philippines.

On April 28, 1961, under the direction of Elder Gordon B. Hinckley, who would also serve as a prophet, the Church was legally registered in the Philippines and received permission to send missionaries to the nation.

“This is an occasion you will never forget,” Elder Hinckley told a group gathered at the American Cemetery and Memorial in Manila in 1961. “What we will begin here will affect the lives of thousands and thousands of people in this island republic, and its effect will go on from generation to generation for great and everlasting good.”

Ruel E. Lacanienta, Philippines Olongapo Mission president, was 10 years old when he and his family met Mormon missionaries in 1963—just two years after Elder Hinckley prayed for the country and the people.

Like so many early members, President Lacanienta was baptized in the swimming pool of Sister Maxine Grimm, who worked with her husband, E. M. “Pete” Grimm, a U.S. Army colonel, to open doors for the Church in the Philippines.

In his lifetime, President Lacanienta has watched the Church grow from one branch, meeting in a rented building, to 100 stakes, meeting in more than 700 Church-owned chapels that now dot the Philippines.

Elder Augusto Lim, the Church’s first General Authority from the Philippines, witnessed much of that growth.

In 1964, two missionaries knocked on the Lims’ door. After meeting with the missionaries, Elder Lim, an attorney, realized that what the missionaries were teaching “was what I believed in the first place. … I just knew this was it; this was something I could understand.”

Elder Lim said rapid Church growth began when the Philippines Mission was formally organized from the Southern Far East Mission in 1967; by the end of that year there were 3,000 members of the Church in the Philippines.

In 1973, when President Ezra Taft Benson organized the first stake in the country, Elder Lim was called to serve as its president.

The Alabang Temple, which will be build in Metro Manila, speaks to the rapid growth of the Church in the Philippines, said Elder Shayne M. Bowen, a General Authority Seventy and Philippines Area President. “The Philippines is a country of over 100 million people,” he said. “Travel times are very long in the Philippines with the heavy traffic. This is particularly the case in Metro Manila. A normal 30-minute trip can take up to five hours. With another temple in Metro Manila in a place called Alabang, the Saints will be greatly blessed to be able to attend the temple more often and with much less time spent on travel.”

Members of the Church in the Philippines gather in the Kia Theater in Quezon City for the creation of the 100th stake in their country by Elder Neil L. Andersen of the Quorum of the Twelve Apostles on Sunday, September 10, 2017. They sustain the new presidency of the Mandaluyong Philippines Stake—Noel Delos Reyes Placer, Marcial Evangelista, and John D. Bautista. Photo by Sarah Jane Weaver.

Rufelia Salangad said growth is occurring so fast in the Philippines that she has witnessed many children she taught in Primary grow and become young Church leaders.

In 1963, Sister Salangad met two American Mormon missionaries who taught her the gospel of Jesus Christ. With her mother, brothers, and sister, she entered the waters of baptism on August 11, 1963.

Two years later, she accepted a call to serve as a missionary in her native land. Along with one other Filipino sister who entered the mission field on the same day, she began her mission on January 5, 1966. Today, the legacy began by Sister Salangad and other early missionaries continues with more than 4,000 native Filipinos serving in the country.

The Church not only spans many stakes in the country, but many generations as well, said Milagros Emata.

She joined the Church two years after her husband, Melecio Emata, entered the waters of baptism in March of 1965. Today their great-granddaughter is a fourth-generation Filipino Latter-day Saint. 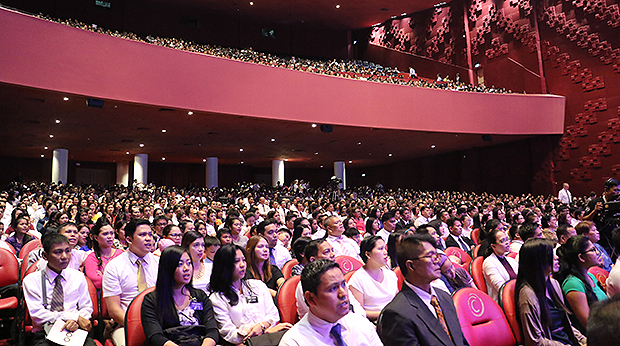 Members of the Church in the Philippines gather in the Kia Theater in Quezon City for the creation of the Church's 100th stake in their country by Elder Neil L. Andersen of the Quorum of the Twelve Apostles on Sunday, September 10, 2017.

And that growth continues. Next week, Elder Allen Haynie of the Philippines Area Presidency and Elder Ryan Pagaduan, an Area Seventy, will organize the 101st stake in the Philippines. The new Calasiao Philippines Stake will be part of the Urdaneta Philippines Mission.

After creating the 100th stake, Elder Andersen asked why among all the nations of the earth “has the Savior set His feet so firmly here in the Philippines?”

“It is because of who you are,” he told the Filipino members. “This is a special place. Do not underestimate who you are. … The most important part of the Philippines is the people.” 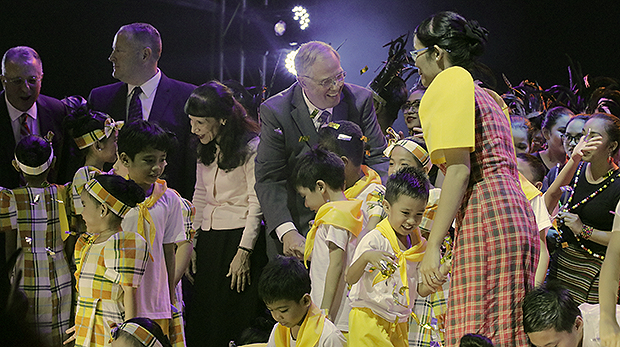 Elder Neil L. Andersen of the Quorum of the Twelve Apostles and his wife, Sister Kathy Andersen, visit with children after a cultural celebration in Quezon City, Philippines, on September 9, 2017. Photo by Noel Maglaque. 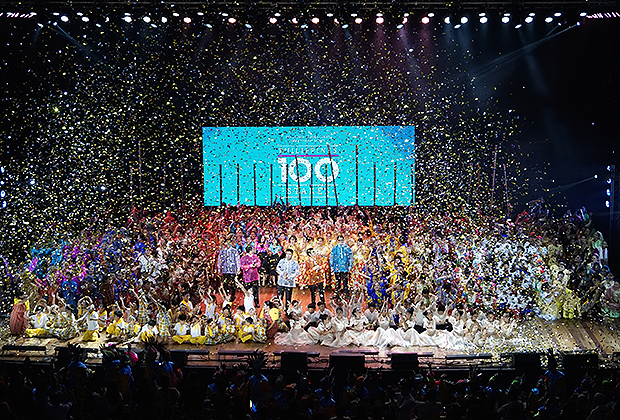 Confetti rains down on performers at the conclusion of a cultural celebration by the Church, titled “Upon the Isles of the Sea” and held in the Kia Theater in Quezon City, Philippines, on September 9, 2017. Photo by Vanalee Carruth. 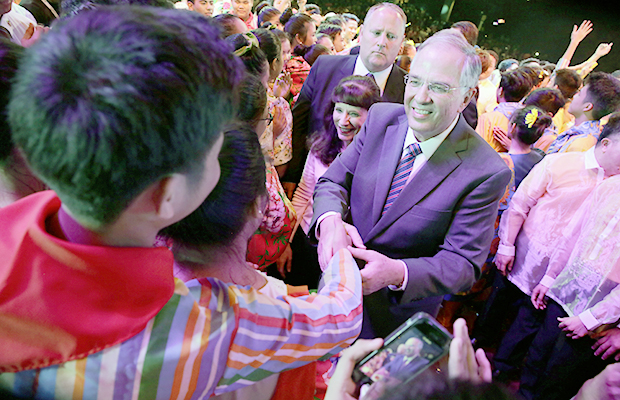 Elder Neil L. Andersen of the Quorum of the Twelve Apostles and his wife, Sister Kathy Andersen, visit with children after a cultural celebration in Quezon City, Philippines, on September 9, 2017. Photo by Noel Maglaque.

Church leaders who have lived or served in the Philippines offer the following tributes to Latter-day Saints in the country, where there are now 100 stakes:

“When Sister [Kristen] Oaks and I arrived in the Philippines 15 years ago, there were only about 80 stakes, but the Philippines area was rich in faith and determination to serve the Lord. I am thrilled that the faithfulness and commitment of the Philippines Saints has brought the Church to this great milestone in their growth in that favored part of the vineyard.” —Elder Dallin H. Oaks of the Quorum of the Twelve Apostles and President of the Philippines Area from 2002 to 2004

“From a not-to-be-forgotten rededication meeting held on April 28, 1961, at the American Military Cemetery, presided over by then-Elder Gordon B. Hinckley, to this day, the Lord has watched over His Church in the Philippines. In that time, many natural disasters have caused death and destruction, but what has never been destroyed is the resilience, faith, love for the Lord, and courage of the Filipino members of the Church. To have the 100th stake created in the Philippines in just 56 years is a testament of the goodness of the people and the missionaries they have labored with. And still, the work is not yet done, the best is yet to come!” —Elder Ian S. Arden, General Authority Seventy and former President of the Philippines Area

“The history of The Church of Jesus Christ of Latter-day Saints in the Philippines is remarkable. In 1961 President Hinckley assigned the first four missionaries to Manila to start the Church. In just 56 years the Church has grown to over 700,000 members with 21 missions and now 100 stakes. This is a landmark event to create the 100th stake at the location of the very first LDS chapel in the Philippines, the Makati Chapel. The Filipino members are faithful and resilient. They exemplify the traits of the Savior as they care for each other with love and kindness. This is a blessing for the members of the Church to reach this landmark event and celebrate the creation of 100 stakes.” —Elder Brent H. Nielson, General Authority Seventy and former President of the Philippines Area