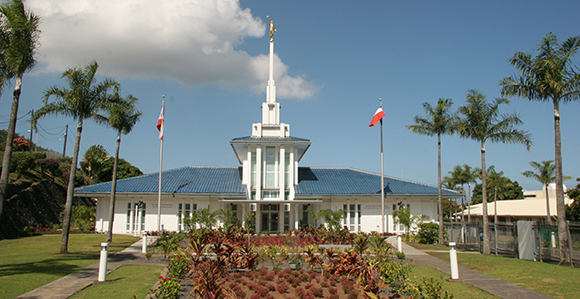 The Papeete Tahiti Temple was dedicated in 1983 and rededicated November 12, 2006.

The dedication of the temple on the Pacific island of Tahiti was “a fulfillment of the dreams of thousands who have looked forward to this glorious day,” said President Gordon B. Hinckley, who was then serving as Second Counselor in the First Presidency.

Over the course of three days—exactly 35 years ago—October 27–29, 1983, President Hinckley dedicated the long-awaited temple with about 2,500 Latter-day Saints attending the sessions. Elder L. Tom Perry of the Quorum of the Twelve Apostles accompanied him on the trip.

The Papeete Tahiti Temple was the fifth dedicated in Polynesia, the fifth of six temples dedicated that year, and the 25th in operation at the time.

“I count it a great privilege to be here with you. It is a wonderful thing to come back to Tahiti. I don't know of a more beautiful place,” President Hinckley said.

Twenty years before, he had dedicated a meetinghouse on Maupiti Island, north of Tahiti. Afterward, as he was conducting a conference on Huahine Island, a telegram from a nurse named Clair arrived. A boat carrying members home from the meetinghouse dedication had hit a reef and 18 people—15 of them Relief Society sisters—had drowned.

The conference was immediately canceled, and Church leaders searched out a boat and food to make the 24-hour journey to the accident.

Clair survived the wreck by holding onto a pole for three hours. During that time, she prayed for rescue. She also prayed that God would show her the true Church so she could work for Him. Soon, Andre Manea, a fisherman, pulled her and eight others out of the sea.

President Hinckley arrived a day later and described the scene. “Everywhere people were crying. We walked up and down the streets, holding the children whose mothers had been killed, trying to comfort the fathers.”

He met Clair, who was injured and emotionally distraught. After asking if she would like a blessing, then explaining what a blessing was, President Hinckley encouraged her to join the Church and serve the Lord.

Between dedicatory sessions of the Papeete Tahiti Temple, President Hinckley met Clair again. Shortly after receiving that blessing, Clair had joined the Church, believing it an answer to her prayer. She’d also married Manea, the fisherman who rescued her. He too had joined the Church and was serving as first counselor to President C. Jay Larson, president of the Papeete Tahiti Temple.

At the dedication of the temple, President Hinckley called it a “great crowning day of 140 years of dedicated service.”

In 1843, the Prophet Joseph Smith called four men—Addison Pratt, Benjamin F. Grouard, Knowlton F. Hanks, and Noah Rogers—to open a mission in Hawaii, then known as the Sandwich Islands. They were unable to find a ship going there after three months, so they boarded a ship called the Timoleon, which was headed for Tahiti, then known as the Society Islands. Elder Hanks died of tuberculosis during that voyage and was buried at sea.

After 203 days at sea, the Timoleon stopped at Tubuai on April 30, 1844. The missionaries received such a warm welcome from the islanders that Elder Pratt decided to stay there while Elder Grouard and Elder Rogers went on to Tahiti.

Other missionaries to the Church’s first foreign-language mission soon followed, and some of their descendants attended the Papeete Tahiti Temple dedication in 1983.

Elder Perry's wife, Sister Barbara D. Perry, is a descendant of Thomas William Whitaker, a missionary who served in Tahiti in 1850. She accompanied Elder Perry to the original dedication of the Tahiti Temple.

“The people are just wonderful,” he told the Church News. “There are not a friendlier people in all the earth than the people here in Tahiti. The ones that came [to the rededication] came reverently this morning. I think it was a very spiritual experience for all of them.” 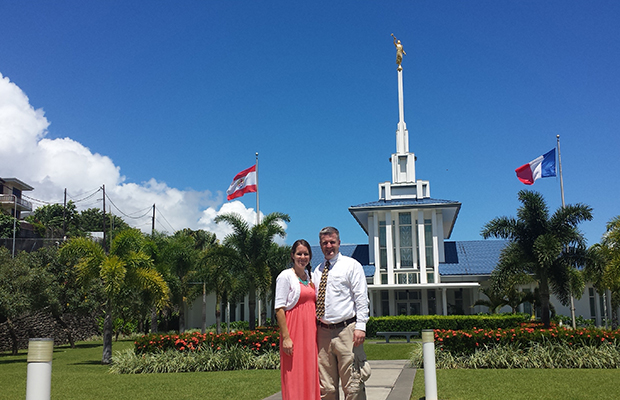 Rhett and Jolene Ogden from Lehi, Utah, standing in front of the Papeete Tahiti Temple. Photo courtesy of the Ogden family.