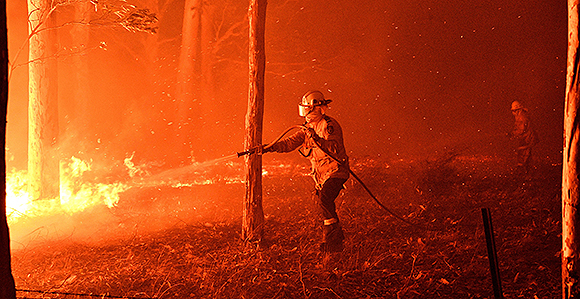 A firefighter hoses down trees and flying embers in an effort to secure nearby houses from bushfires near the town of Nowra in the Australian state of New South Wales. Photo by SAEED KHAN/AFP via Getty Images.

Responding to the growing concerns raised by the devastating wildfires sweeping across Australia in a season of drought, the Pacific Area Presidency of The Church of Jesus Christ of Latter-day Saints issued a statement inviting Australian Latter-day Saints to unite together on the first fast Sunday of the new year, January 5, for a day of fasting and prayer “to petition the Lord for relief from the bushfires and drought conditions.”

The wildfires, which have been raging in Australia since November, have “prompted one of the largest evacuations in the country’s history,” according to an AP News report, and are expected to cause increasing damage across the country in the coming days and weeks.

With more than 200 wildfires blazing, government leaders throughout affected areas have been ordering evacuations as fires continue to spread due to the strong winds and hot weather of Australia’s summer. Some 12.35 million acres of land have already burned throughout the country, with more than 1,400 homes destroyed.

According to a recent AP report, more acres have burned this summer in Australia than have burned in the United States in a single year since the time of Harry Truman’s presidency.

The Area Presidency also noted their gratitude for the Welfare and Self-Reliance teams in the area who have been monitoring the ongoing situations with the fires and have been providing guidance for local leaders and the Area Presidency for how to respond.

The Church has already contributed “thousands of dollars in humanitarian aid and stands ready to donate further funds” as they are needed, the Area Presidency said in their statement, adding that local members “have also responded by donating hundreds of hours of service to their fellow citizens.”

For Latter-day Saints around the world wishing to donate funds to be used in relief efforts for those impacted by the ongoing fires in Australia, the Area Presidency noted that contributions can be through the Humanitarian Aid category on Church donation slips.

Concluding their statement directed at Latter-day Saints in Australia, the Area Presidency stated that their prayers “will continue on behalf of your nation during this challenging time.” 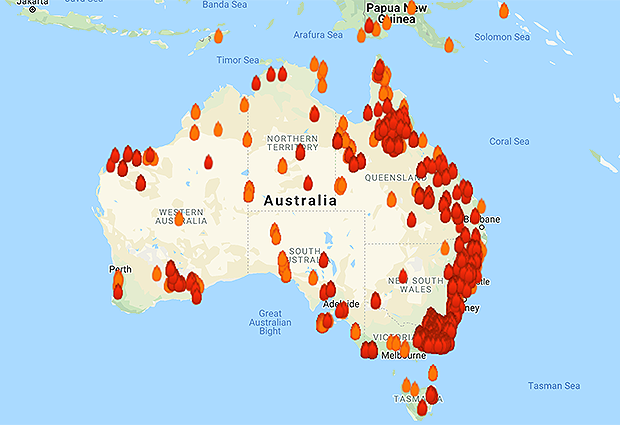 Locations of bushfires across Australia that are 12–48 hours as of January 3, 2020. Map courtesy of Landgate Firewatch.