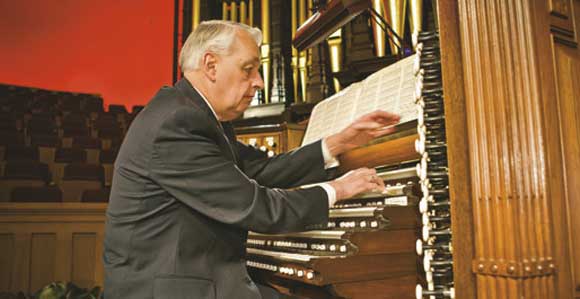 “There is something about the sound of music that attracts. I think it’s because it tugs at the heartstrings. There is a unity in beautiful harmony that I think reminds us of the harmony of heaven, from where we all came—our heavenly home.” —Clay Christiansen

Mormon Tabernacle Choir organist Clay Christiansen can’t remember a time he didn’t want to be a musician. He recalls as an eight-year-old boy watching his aunt play the organ in their newly finished meetinghouse.

“I didn’t get to play [the organ]—I just sat and watched,” Brother Christiansen said. “I was so envious of Aunt Jean . . . and I could hardly wait to get my hands on it.”

By the time Brother Christiansen was 11, he was able to play the hymns on the piano. Because organists were hard to come by, he was asked to be the organist for the opening exercises in priesthood meeting even before he was ordained a deacon.

Although Brother Christiansen has continued over his lifetime to play both piano and organ, becoming attached to the sound of the Mormon Tabernacle Choir led him to focus on the organ. When he was 13, he began taking weekly lessons from J. J. Keeler, who started the organ program at Brigham Young University. He studied with Brother Keeler for nine years, until he graduated from BYU with a degree in organ performance.

Watching and hearing Brother Christiansen play complicated pieces on the organ—with feet and hands flying and quick reaches to pull or close organ stops—might be enough to inspire any aspiring organist. But acquiring these skills came through hard work and dedication.

“In the beginning, both feet did not want to play, and my left hand wanted to be doing the same thing that my feet were doing—playing the same notes,” Brother Christiansen said. The key, he said, is to practice, which he still does for two to four hours each day.

But practicing, even for someone as skilled as Brother Christiansen, can become tiresome, especially, he said, when he is working on a piece that is particularly active and demanding, or when sitting on a hard bench for long periods of time. “Then it’s good to get up, walk around, take a drink of water, take a deep breath, and come back to it,” he said.

Brother Christiansen’s practice has paid off—he has received invitations to play on a number of famous organs in Europe. But no matter where he goes, the Tabernacle on Temple Square in Salt Lake City, Utah, USA, is home.

“Like most LDS organists, [I had] a dream of someday playing at the Tabernacle, but that was tempered by the reality that there were only three full-time Tabernacle organists, and you couldn’t stake your life on the chances,” Brother Christiansen said. “It was a complete surprise when they asked me.”

It was 29 years ago, while he was teaching students at St. Mark’s Cathedral in downtown Salt Lake City (where he had been employed as organist choirmaster for 10 years) that he received a visit from the head Tabernacle organist, Robert Cundick.

“Brother Cundick asked if I could step down with him for a minute,” Brother Christiansen said. “He asked me how I would feel about coming over and being a Tabernacle organist. A few days later he appeared and said, “You’ve got an interview with President [Gordon B.] Hinckley (who was then one of the Counselors in the First Presidency) in half an hour.”

Twenty-nine years later, playing the organs in the Tabernacle and the Conference Center are still surreal experiences to him. “I enjoy it as much as I ever have,” he said.

Brother Christiansen says that the thing he loves most about music is the sound—and the effect it has on its listeners.

“There is something about the sound that attracts,” he said. “I think it’s because it tugs at the heartstrings. There is a unity in beautiful harmony that I think reminds us of the harmony of heaven, from where we all came—our heavenly home. Music reminds us of home, I think.”