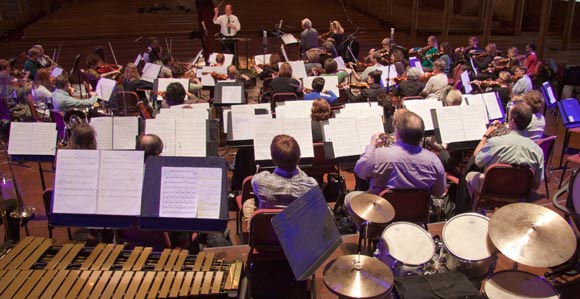 “What they have achieved is way beyond what should happen by all earthly logic.” — Igor Gruppman, principal conductor of the Orchestra on Temple Square

Anyone who has watched and listened to a professional orchestra would agree that a performance is quite an undertaking. From the harmony of the music to the unison of movement among the strings to the aesthetics of the stage, orchestral concerts take a lot of work.

Which makes the volunteer Orchestra at Temple Square all the more remarkable.

The orchestra—which was first assembled in 1999 as a companion ensemble to the Mormon Tabernacle Choir—is composed of volunteer instumentalists, all of whom perform at a high leverl of musicianship. They are called and set apart in their role as “musical missionaries.”

“It's been a unique opportunity to play such inspired works as Beethoven’s 7th Symphony or the Mozart Requiem with others who not only believe in the same higher power that you do, but are also set-apart musical missionaries,” said Kathy Ludlow, a violinist who has been with the orchestra since its inception.

Some members of the orchestra are music teachers. Others make their living performing in other professional orchestras. Others don’t make their livelihood in music but have kept up their musical skills in their free time. Orchestra musicians spend their days in a variety of ways, but all are professional-caliber musicians who can come to a rehearsal, take their seats, and play the music set before them at first sight.

Kathryn Collier, a professional violinist, is among them. When the orchestra was first organized, she was “already doing quite a bit musically,” but she realized that participating was an opportunity she needed to take.

“I’ve been quite blessed musically in my life, and I just felt like this was an opportunity for me to give—not to expect money in return—but to give of myself,” she said. “It’s not really a sacrifice for me because it’s such a joy. I really love the common bond that we have and the goal we have to bring light and joy to people.”

“Musicians generally come from very competitive settings,” said Barry Anderson, who manages the affairs of the orchestra in his role as administrative manager and controller for the Mormon Tabernacle Choir organization. “Many of the members of the orchestra are talented enough that they’re getting paid as a professional to do what they do. And then the paradigm shifts. They come to play as part of the Orchestra at Temple Square, where they’re not paid. They lay it on the altar.”

Daron Bradford, principal clarinetist, has experienced that paradigm shift. “I have some friends who have a little philosophical issue with the orchestra,” he said. “They say, ‘Why should we do this thing we do professionally for a living? Why should we do it for free?’

“I treat this as a missionary calling, and I actually think that it wouldn’t work if the orchestra were paid, if [the Church just hired] a professional orchestra. I think this is the only way it could have worked. And it’s very rewarding for me.”

Igor Gruppman, principal conductor, said, “Members of the orchestra are well-educated, well-rounded, professional musicians, by and large. The word ‘volunteer’ only describes their selfless giving because they don’t get paid. In this respect it is unique. I’m grateful for the absolutely selfless, inspiring work of every musician. They work very, very hard.”

An Orchestra in Flux

The fact that all the musicians in this professional-grade orchestra are volunteers is one thing. But the flexibility with which the orchestra operates is another matter altogether.

Preparation for a performance will begin some six months in advance. Music director Mack Wilberg determines which pieces the orchestra will be performing and when. Brother Anderson then looks at the pieces for a “service” (which may be a concert, tour, recording, or performance of Music and the Spoken Word) and its instrumentation—how many musicians are needed for each section of the orchestra.

He then contacts members of the 170-musician group and asks them to “sign up,” essentially, to perform at various services. (A full orchestra usually requires some 85 to 90 players, but that may vary, depending on the piece.) So the orchestra performing at a Saturday evening concert may or may not consist of the same people who perform at Music and the Spoken Word on Sunday morning. In March 2011 alone, the Orchestra at Temple Square performed at some 20 different services.

“The musicians come in and out,” Brother Anderson said, referring to the transitional nature of the services. “Some are part of the core and perform every week. Others come as they’re able to. But when players sign up, they come. They have to come. That’s one of the amazing things about this group—they are loyal. They are devoted to their calling. They’ll do anything to be here. I don’t think there’s anything quite like it in the world, Church-wise or musically.”

Over the nearly 12 years the orchestra has been in existence, approximately 350 musicians have demonstrated that kind of loyalty.

Because of the way the orchestra is set up, the musicians who comprise the orchestra don’t have the opportunity to see the music in advance or practice at home. A rehearsal and a performance are really the only times the orchestra members will see and play the music, so all of them must be able to sight read.

Brother Gruppman also recognizes the unique nature of the group.

The Work Behind the Scenes

The performers aren’t the only ones giving of their time and expertise. Music librarians, stagehands, truck drivers, and others help make the performances a success.

Bob and Gloria Campbell, who met 50 years ago in the BYU orchestra, have served as the music librarians for the orchestra since 2003. Drawing on their musical experience, both in the Church and professionally, Brother and Sister Campbell serve the orchestra by pulling music from the library, making sure it’s in good order, getting the right piece to the right musician, and filing the music after a service is over. Brother Campbell also plays in the orchestra and is the percussion section leader.

Although all members of the Mormon Tabernacle Choir receive the same piece of music, orchestra members all have different parts to play. The Campbells distribute the music in “score order,” starting with the flutes and moving to the other instruments with lower sounds. They also make sure the music for the string parts is bowed, or marked, so that the musicians emphasize the right notes.

“Our goal is to make sure the music is correct so that rehearsals can go as smoothly as possible,” Sister Campbell said. “We like to do a lot of checking so that can happen—rehearsal time is so precious.”

Sister Campbell said that she always imagined herself and her husband serving a mission together somewhere and said that although they are designated “volunteers” and not missionaries, in many ways this has been the perfect mission experience.

“We love what we do,” she said. “In many ways, the orchestra is like our ward family. We certainly see them more often than we do the members of our ward. It’s very enjoyable work, and it’s wonderful to be associated with such high-caliber musicians.”

Alex Morris serves as the stage manager for the Mormon Tabernacle Choir Organization, which includes the Choir, the Orchestra at Temple Square, the Temple Square Chorale, and the Bells on Temple Square. He is responsible for the logistics of that organization, from coordinating the setup of the orchestra—including putting various percussion instruments on stage—to facilitating the needs of the conductor, such as moving an instrument that will be highlighted during a performance.

Brother Morris works with a stage crew of 10 people, who are called and set apart in their roles as he has been. He attends each service, working not only with the conductor but also those who coordinate the logistics of the broadcast.

“When you are part of that organization and see the momentum of that entire righteous group of people spreading their spirit to the world in such a fashion, it’s reward enough to be backstage and to be a part of it,” he said. “It’s a huge endeavor, but it’s a huge blessing I have a firm testimony of the mission of the choir organization. They mitigate the horrendous noise in the world today by producing a positive noise. We give our utmost to whatever that mission involves.”