Book of Mormon Is Focus of Liahona and Ensign Special Issue 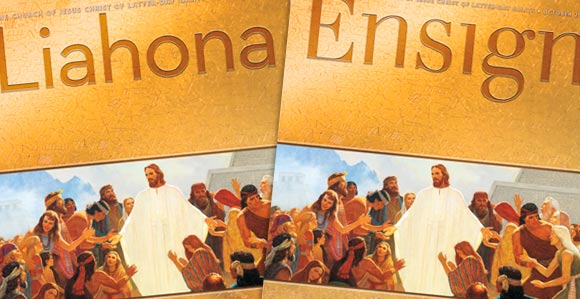 Members are encouraged to use the October issue of the Liahona and Ensign for their own personal instruction and to share it with others.

“We’re pleased to offer this issue in the hope that it will bring inspiration to families and individuals trying to understand, practice, and share with others the Book of Mormon.” —Elder Paul B. Pieper of the Seventy, executive director of the Curriculum Department

The October 2011 issue of the Liahona and Ensign is a special issue that will focus on what the Book of Mormon is, why it exists, and how it affects lives.

Its pages will include a history of the Book of Mormon, members’ personal experiences with it, suggestions for scripture study, and information on how it applies today. The testimonies of and insights into the Book of Mormon from living prophets and apostles, as well as from Joseph Smith and every Church President since, are incorporated throughout the issue.

“There is strength in the testimonies of those who lead the Church,” said Jenifer Greenwood, assistant managing editor of the Liahona. “Their testimonies are based on the Book of Mormon, the keystone of our religion. We have a great desire for members to feel those testimonies.”

Members are encouraged to use the special issue in two ways, said Elder Paul B. Pieper of the Seventy, Executive Director of the Curriculum Department.

“First, members and missionaries should review it for their personal edification and to strengthen their testimonies of the Book of Mormon,” he said. “Second, they should share the magazine with others, including less-active Church members and nonmembers.”

The First Presidency Message by President Thomas S. Monson will focus on the precious promises found in the Book of Mormon.

For instance, the Prophet Joseph Smith said, “I told the brethren that the Book of Mormon was the most correct of any book on earth, and the keystone of our religion, and a man would get nearer to God by abiding by its precepts, than by any other book” (introduction to the Book of Mormon).

Members will be encouraged to be more diligent in reading and studying the Book of Mormon, as they were with the challenge President Gordon B. Hinckley (1910–2008) issued to members in 2005 to read the Book of Mormon before the end of the year.

The Book of Mormon has withstood the tests of time, trial, and testimony and lies at the heart of the gospel of Jesus Christ.

“This issue has been prepared with the hope that it will bring inspiration to families and individuals as they seek to understand, practice, and share with others the teachings of the Book of Mormon,” Elder Pieper said.

The October issue will be available in 42 languages. All members are encouraged to become familiar with its content. An additional 39 languages will receive the First Presidency Message and Visiting Teaching Message from the issue. The full issue will also be available online in 38 languages on the Liahona and Ensign websites.

Members who wish to subscribe or give a gift subscription can call (see a list of phone numbers here), visit a local store (see a list of worldwide locations here), or order online at store.ChurchofJesusChrist.org.