October Conference Was Accessed and Shared More Than Ever

Translation and interpretation miracles made it possible for 97 percent of the Church’s 15 million members to watch conference in their native language.

No longer do we have to wait months for the talks to arrive by mail. On a computer, phone, or other electronic device, we can read, listen to, watch, and share the teachings of the prophets.” —Elder Robert D. Hales of the Quorum of the Twelve

More people all over the world were able to access and share messages from the October general conference sessions more quickly and conveniently than ever.

Elder Robert D. Hales of the Quorum of the Twelve Apostles commented in the opening session: “No longer do we have to wait months for the talks to arrive by mail. On a computer, phone, or other electronic device, we can read, listen to, watch, and share the teachings of the prophets” (“General Conference: Strengthening Faith and Testimony”).

During general conference weekend, October 5–6, millions of people from 216 countries used the Internet, satellite, and TV to watch, listen to, and read general conference in 95 languages. That translation and interpretation miracle made it possible for 97 percent of the Church’s 15 million members to watch conference in their native language.

For the first time, the Church made the live feed of the priesthood session available in channels besides the Church’s satellite system, which made it more accessible and convenient for people to watch.

Immediately after each session, people could view and download video of the session from conference.ChurchofJesusChrist.org. Up until the evening of October 9, those videos had been watched online 674,000 times and downloaded 4 million times. During that same period, audio files had been downloaded 1.8 million times.

Hundreds of thousands of people read conference-related stories and summaries of talks on websites such as ldschurchnews.com, mormonnewsroom.org, news.ChurchofJesusChrist.org, and deseretnews.com. The full texts of the talks were available in English on ChurchofJesusChrist.org less than three days after the last session concluded.

The LDS General Conference audio podcast was number 2 in the top iTunes podcasts in the Religion and Spirituality category. 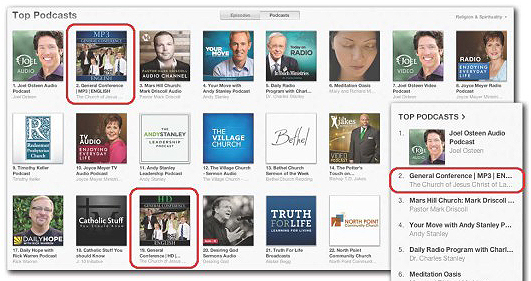 Elder Neil L. Andersen of the Quorum of the Twelve Apostles has encouraged members of the Church to share the gospel through the Internet and social media. “Let’s make sharing our faith online more a part of our daily life,” he said. “ChurchofJesusChrist.org, Mormon.org, Facebook, Twitter—all provide opportunities” (“It’s a Miracle,” Apr. 2013 general conference).

Members typically flock to social media during general conference to share their testimonies, favorite talks, announcements, and quotes. This October, the Church facilitated the sharing of those messages by posting quotes, memes, and video highlights in real time during the conference sessions on the Church’s Facebook page, Twitter, and Google+ accounts. (See the social media content the Church posted during conference.)

Members sent 131,000 invitations to their friends on Facebook to attend the Facebook conference event. Many people changed their Facebook and Google+ cover images and profile pictures to reflect an image from conference, and they created and shared hundreds of conference memes (graphic images with quotes from conference). 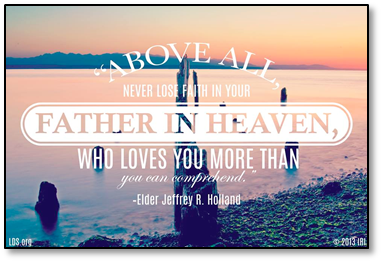 An inactive member commented that she had found comfort listening to Elder Holland’s talk after a friend had posted the link on her Facebook page. “Brother Holland's talk really spoke to me today,” she said.

There were over 155,000 tweets shared with the hashtag #LDSconf—up from 128,000 tweets at April conference. The hashtag #LDSconf trended on Twitter worldwide (meaning it was one of the top 10 most popular terms at various points during the weekend). It also trended similarly on Google+ and other social networks. During the previous weekend’s general Relief Society meeting, the hashtag #ReliefSociety also became one of the top 10 trending terms on Twitter in the United States. (See a list of recommended hashtags for the Church.)