President Thomas S. Monson was ordained an Apostle on October 4, 1963, at the age of 36. Watch the first general conference address Elder Monson gave as a newly called member of the Quorum of the Twelve. Download video.

On Friday, October 4, 1963, Thomas S. Monson walked into the Tabernacle on Temple Square and looked for and found a seat on the main floor’s north side of the building, fairly close to the front.

A photographer assigned to cover the 133rd Semiannual General Conference of the Church snapped what might well be the last photo of him as a “rank and file” member of the Church. Just moments after that picture was taken, 36-year-old Thomas S. Monson was sustained as the newest member of the Quorum of the Twelve Apostles.

Never since has he had to look for a seat at general conference; however, he has never completely removed himself from the “rank and file” members. In the half century since being called as an Apostle, President Monson has never lost the desire to be among the members. He has loved shaking hands with them, giving them hugs, and talking to them wherever he has gone throughout the world.

Fifty years ago, at that semiannual general conference, he began his first address as a newly called General Authority with these words:

“Some years ago I stood at a pulpit and noticed a little sign that only the speaker could see, and the words on that sign were these: ‘Who stands at this pulpit, let him be humble.’ How I pray to my Heavenly Father that I might never forget the lesson I learned that day!”

Though just 36 years old, the new Elder Monson was mature in Church leadership. Called at age 22 as a bishop, age 27 as a stake president’s counselor, and age 31 as a mission president, he was already experienced in teaching and leading others and in listening to and being guided by the Spirit. Humility and compassion have guided him in all his ecclesiastical endeavors.

“I think of a little sister, a French-Canadian sister, whose life was changed by the missionaries as her spirit was touched as she said good-bye to me and my wife two years ago in Quebec. She said, ‘President Monson, I may never see the prophet. I may never hear the prophet. But President, far better, now that I am a member of this Church, I can obey the prophet.’” 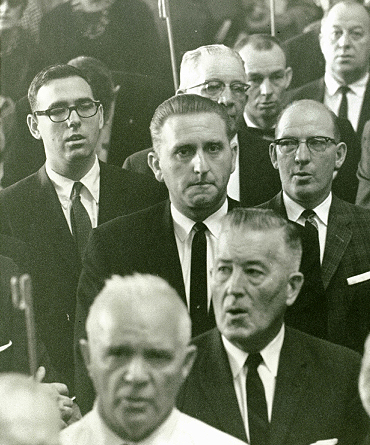 Thomas S. Monson is shown in the audience at the Tabernacle on Temple Square, moments before he was sustained as a General Authority and invited to the stand.

That French-Canadian sister had no way of knowing that she was speaking to a man who, just a couple of years later, would be called by a prophet, David O. McKay, to serve in the Quorum of the Twelve and in future years would become a prophet.

In his first address to the general membership of the Church, Elder Monson said: “My sincere prayer today, President McKay, is that I might always obey you and these, my brethren. I pledge my life, all that I may have. I will strive to the utmost of my ability to be what you would want me to be. I am grateful for the words of Jesus Christ, our Savior, when He said:

“‘I stand at the door and knock. If any man hear my voice and open the door, I will come in to him.’

“I earnestly pray, my brothers and sisters, that my life might merit this promise from our Savior.”

Elder Monson bore his testimony: “I know that God lives, my brothers and sisters. There is no question in my mind. I know that this is His work, and I know that the sweetest experience in all this life is to feel His promptings as He directs us in the furtherance of His work. I have felt these promptings as a young bishop, guided to the homes where there was spiritual, or perhaps temporal, want. I felt it again in the mission field as I worked with your sons and your daughters —the missionaries of this great Church who are a living witness and testimony in the world that this work is divine and that we are led by a prophet.”

During an interview several years ago, the Church News asked President Monson to describe what it had been like to be called as an Apostle of the Lord. He did not answer that inquiry directly but spoke of “being called of God” in more general terms. He spoke of being called as a bishop at age 22 to serve in a ward of 1,080, more than 80 of whom were widows. He said, “I had a heavy responsibility for welfare, and I might mention that our family was a pioneer family in that ward. About a third of the ward was represented by old-time families and two-thirds by a transient population. Why I was selected, I can’t tell you. Only the Lord would know that. I had the opportunity to serve for five years as bishop of that large ward. I would say it was one of the most productive periods of my life” (Gerry Avant, interview notes, Aug. 1997).

After the death of President Gordon B. Hinckley on January 27, 2008, President Monson was ordained and set apart as President of the Church on February 3, 2008.

Shortly before he was to be sustained by the membership of the Church in a solemn assembly during the April 2008 general conference, the Church News asked President Monson if he could describe his thoughts and feelings pertaining to the moment he realized he was going to be the next President of the Church. Again, President Monson gave an answer that could be understood by just about anyone who serves in the Church: “I’ve always followed the philosophy ‘Serve where you are called, not where you have been or where you might be. Serve where you are called.’

“I did that as a bishop, as a stake presidency member, as a mission president, and as an Apostle. I’ve never speculated on what might lie ahead for me. I just never did. I didn’t know but what President Hinckley would outlive me” (Church News, Apr. 5, 2008).

Throughout his life, and particularly during his 50 years as a General Authority, President Monson has served where he has been called. As a member of the Quorum of the Twelve, he supervised the missions of the Church in the western United States, the South Pacific, Mexico, Central America, and Europe. After a number of years and following the policy of rotation, the European missions were transferred to another member of the Twelve; however, Elder Monson retained responsibility for all countries behind the Iron Curtain. He was instrumental in the construction of the Freiberg Germany Temple, served as chairman of the Scriptures Publication Committee, and supervised the process that resulted in the new editions of the standard works of the Church.

During a conversation with the Church News prior to his 70th birthday (see Church News, Aug. 23, 1997), President Monson said that one of the things that had brought him the most joy was “feeling the nudge of the Lord, the promptings. When you respond to them, you discover that in a way you’re answering someone’s prayer.”

He gave as an example an experience he’d had several years earlier as he was leaving a hospital after visiting his father. He was rushing to get to an 8:00 a.m. meeting. “I was in a hurry, but I just couldn’t take that elevator when its doors opened,” he said. “I wondered, ‘What am I to do?'

“A lady came out of a room and asked, ‘Do you have a minute?’ I didn’t have a second. But her appeal was so tender that I said, ‘Sure.’ I went into the room. There was a dear woman who was having a hard time leaving this earth. The family was all assembled, crying. They said, ‘Will you give Mother a blessing and ask Heavenly Father if it is her time that her wish might be granted, or if it isn’t that her health might be restored?’ Her son and I administered to the woman. Later, when I returned to my office, I received word that each one of the children kissed the mother and said good-bye. Then she slipped away. I didn’t know any of them when I went into that room, but I knew then why I couldn’t get on that elevator.

“I’ve had that happen to me all through my life to the extent that I try to keep the antennae up and have no interference so there is clear communication. When I’m the recipient of that kind of blessing, I think of the little couplet, ‘God’s sweetest blessings always go by hands that serve Him here below’ (“Living What We Pray For,” by Whitney Montgomery).

“You develop an appreciation that Heavenly Father knows who you are. And He says, ‘Here, go do this for me.’ I always thank Him. My only regret is that I don’t have more time to do the many things we are called upon to do. I work hard. I work long. I hope I work effectively, but I never feel I have exhausted what I should be doing. … I believe we have a responsibility to be a good influence on others.”

Asked how he would like to be remembered, President Monson replied with a brief phrase that aptly captures the essence of his life and ministry: “I tried my best.”