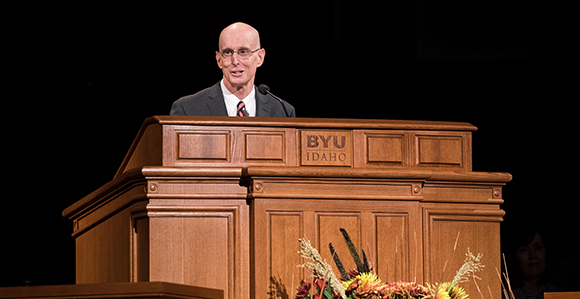 “It is evident that the Light of Christ and the Holy Ghost can inspire, instruct and encourage even the youngest people. They optimistically embrace the challenge of overcoming obstacles.… They are physically, emotionally and spiritually designed to succeed.” —Henry J. Eyring

For a young, pre-teen Henry J. Eyring, the prospect of learning to water ski was an experience that would turn into a life lesson on the topic of “opposition in all things.” He had no desire to skid across the surface of the cold and deep Lake Tahoe. But, to avoid the scorn of his older, athletic cousins, he decided to give it a try.

“With the boat and me moving slowly at the beginning, the attempt to straighten my legs and stand had the effect of turning my skis into anchors,” BYU-Idaho president told students during his beginning-of-the-semester devotional address on September 24. “Then, by holding tightly to the rope handle—as admonished by the boat captain—I began to swallow water like a whale shark sifting plankton.”

Through the rest of his remarks, President Eyring revealed two things: First, he eventually learned how to water ski, and, second, the Savior helps individuals grow by enabling them to rise above opposition.

“The experience of learning to water ski has become spiritually instructive for me,” President Eyring said. “My struggles and eventual success in waterskiing and other challenging situations have become a kind of personal parable and a source of spiritual insight.”

He compared the earth to a divinely designed laboratory or classroom. He said infants immediately begin to learn when they are born. In week one, they distinguish their parents’ voices from others. In week two, they begin to focus on faces. They then snuggle their parents and test their own voices in the weeks after.

“Infants learn naturally,” he said. “It is evident that the Light of Christ and the Holy Ghost can inspire, instruct, and encourage even the youngest people. They optimistically embrace the challenge of overcoming obstacles.… They are physically, emotionally, and spiritually designed to succeed.”

While these obstacles and trials individuals encounter are calculated to create spiritual growth, they only produce this empowerment when one lives in righteousness. President Eyring warned of Lucifer’s plot to influence people to make choices that jeopardize their long-term happiness.

President Eyring isolated two tactics the adversary uses—pride and self-doubt. He shared that as a young management consultant in Boston, he fell victim to both of these devilish tools.

As he was paid well and given leadership opportunities, he started to become confident, even arrogant. Looking back, he said, he can see that, though he served faithfully in the Church, his pride in his professional achievements yielded a lack in humility. After opening an office in Salt Lake City for the consulting firm, he then experienced the fall that comes after pride. The high-priced consulting firm wasn’t as successful in Utah, and he gave up on the Salt Lake City office.

“Gradually, disappointment and declining confidence began to show up in my hair,” he said. “Before long I had lost all of it, from head to toe, leading friends to ask worriedly about my physical health. Having planned to become a ‘big wheel’ in Utah, I instead found myself wanting to disappear.”

In hindsight, he said he recognized his desire for professional success was less motivated by desires to benefit his family and the Church and more of a selfish venture. He thought he could be both personally ambitious and bless other people at the same time.

“Fortunately, Sister Eyring and other loved ones stood by me and, through wise words and kind deeds, helped me see the need to repent of my pride and seek the healing balm of the Atonement and the ministry of the Holy Ghost,” President Eyring said. “I increased my study of the scriptures. And, at Sister Eyring’s inspired suggestion, I began to keep a personal journal. In time, I began to qualify for heaven’s blessings, which took a different but far better form than I had imagined.”

President Eyring shared how keeping a journal changed his life. At first, he said it was hard to record his daily actions. But then he saw that he could create uplifting stories for his journal by seeing the good in small things and by serving others so he could write about encouraging tales at the end of the day. Serving others and being able to see the small miracles by writing about it in his journal, he began to change and turned a downward spiritual and emotional spiral into a permanent upward one.

“Selflessly serving others, I have found, qualifies us for spiritual power,” he said, highlighting it as an eternal principle at work. “Service is a balm to both the receiver and the giver.”

President Eyring said that serving others and being able to see God’s designs can restore the inquisitiveness, optimism, and inspiring success of childhood to believers of any age. This doesn’t change the difficulty of overcoming the challenges, as the perseverance through trials is what creates the growth.

President Eyring said recording these experiences in a journal is one of the best ways to develop the gift of spiritual sight.

“It’s easier and more rewarding than you might think,” he said. “You don’t need formal training in writing. And you don’t have to write every day or capture all of any one day’s events. I’ve found it useful to focus on just a few notable events and feelings, especially those in which heaven’s hand could be felt or seen.”

He said that taking the opportunity to think critically about what has really happened during one’s day helps to see good intentions. President Eyring invited listeners to see and write about the would-be hero inside. Giving credit for acts of kindness and courage, he said, can help one see through God’s eyes.

“With the Savior’s power and the Holy Ghost’s direction,” he concluded, “you can create a life story that ends with the declaration, ‘Well done, thou good and faithful servant: thou hast been faithful over a few things, I will make thee ruler over many things: enter thou into the joy of thy lord’” (Matthew 25:21).

Sister Kelly Eyring opened her talk by welcoming students from summer and sharing one of her son-in-law’s summer achievements—participating in and finishing in the top 5 percent of a Spartan Race. After detailing the hard work he put in to accomplish this difficult task, she testified of the great satisfaction that can come from doing hard things.

“When I am doing something difficult, it is helpful to envision my desired outcome,” she said. “For example, every time I get out of our boat and into the water to ski, my heart pumps fast and my adrenaline flows as I watch the rope unwind while I sit in the water with my ski tip up. I breathe deeply and envision myself getting up.”

Sister Eyring taught that the practice of envisioning the desired outcome can work in many aspects of life. While some of what people envision for their future will require a lifetime of hope, one can find ways to have faith in small and meaningful ways today. As individuals are diligent through the “opposition in all things,” they can be comforted in knowing that trial will help them learn and grow.

“For now, I encourage you to envision your success this semester,” she said. “Let’s all envision a semester of exciting things to learn, new friends to make, and the joy that comes when we rely on the companionship of the Holy Ghost and the love of our Heavenly Father and the Savior.” 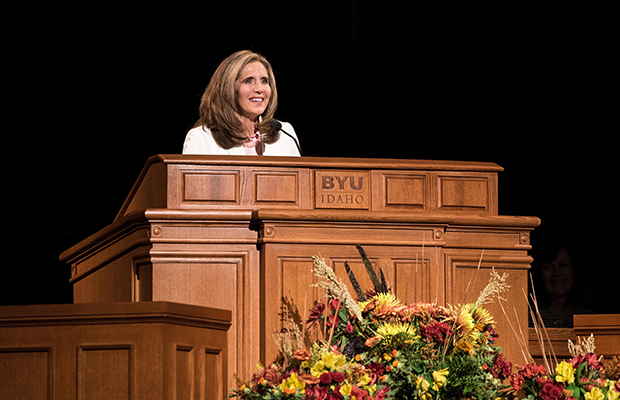 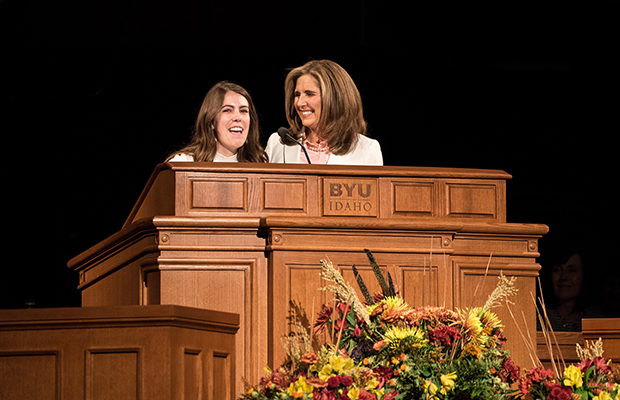 Standing next to Sister Kelly Eyring, a student shares insight with the audience at Devotional in the BYU-Idaho Center on September 24, 2019. Photo by J. Lawson Turcotte. 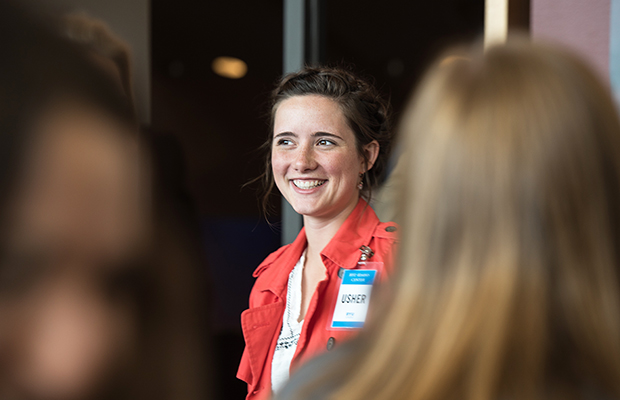 A student welcomes people to the BYU-I Devotional on September 24, 2019. Photo by Brooklin Larson.