Not Where but How You Serve: Returned Missionaries Share Unexpected Blessings of COVID-19 Mission Changes 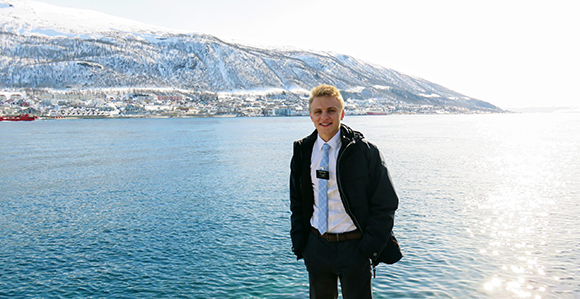 “It doesn’t matter necessarily where you serve but how you serve.” —Elder Tanner Cannon Birtcher

Editor’s note: This is part two in a series sharing the stories of missionaries returning home during the COVID-19 pandemic. More responses will be published in the coming days. Responses have been edited for length and clarity. Read part one here.

When Alex and Jenny Curtis learned their missionary son was returning home with strict guidelines for self-isolation, the couple knew it would be difficult for the whole family to self-isolate for two weeks.

So they decided to have their 16-year-old son, Daniel, pick up his older brother at the Salt Lake City airport and drive him home to their small farm in rural Garland, Utah. Once there, the boys could isolate together.

“Daniel really missed his brother a ton,” Alex Curtis said. “We thought it would be cool for them to be quarantined together.”

Daniel didn’t have a vote on the matter, but he didn’t mind it either. He was excited to spend time with his brother.

Elder Alec Curtis had served in the Dominican Republic Santo Domingo East Mission for 13 months when he and other missionaries found out they were going home.

“It didn’t seem real. It was sad news for all of us,” the missionary said. “Very few missionaries didn’t cry when they heard about it.”

After Daniel picked his brother up at the airport, the Curtis family prepared an official social-distance welcome for the brothers in their driveway, then watched as the pair went into the basement for their two-week isolation.

Alex and Jenny Curtis said it was difficult to not hug their son, but they were grateful to have him safe at home.

“It was so different than I imagined, not going to the airport or hugging him. I was worried about how I would handle that,” Jenny Curtis said. “I was surprised to find out that it was just fine. I didn’t feel regret or disappointment, just gratitude and joy that he was safe.”

It required some creative planning to work around meals and laundry with the two boys in isolation, but the family figured it out. The brothers had what they needed in the basement, and at times the other siblings and parents gathered on a stairway landing, a safe distance from the boys, to have family devotionals, study Come, Follow Me, or watch movies.

At the end of the two weeks, the real reunion was tender and sweet.

“We went by the letter,” Alex Curtis said. “We felt like if we did everything we could, the Lord would do his part.”

And Elder Alec Curtis was grateful to have his brother as a companion for two weeks.

“Honestly I don’t know how I would have made it alone in the basement for two weeks,” said Elder Alec Curtis, who has a new mission assignment in Little Rock, Arkansas, beginning May 6.

As a bonus, Daniel said he came away from the experience more excited about looking forward to serving his own mission. 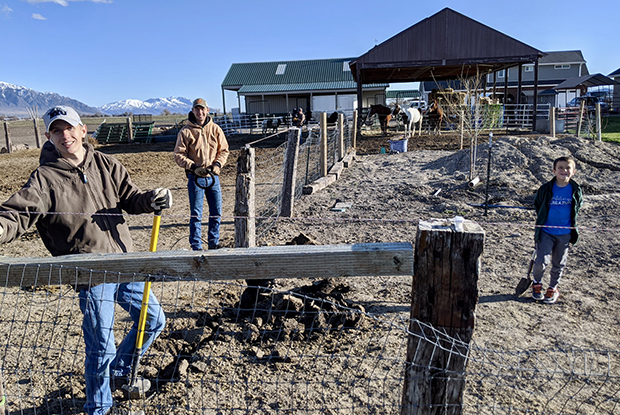 Following are some of the many experiences emailed to the Church News in response to a request for missionaries to share what they have learned from their disrupted mission experiences due to COVID-19.

God Speaks to Each of Us

I am currently one of six sisters left in the Micronesia Guam Mission. Sending home 83 other missionaries who have become family over the past 14 months was heartbreaking, but amid the chaos miracles have been seen.

Just after the news was announced that a large majority of missionaries would return home, personal experiences began to be shared. An elder in the mission had a dream about returning home from his mission on a Friday in March. Another sister dreamed of watching general conference with her family. My sweet MTC companion shared that she’d always felt as though her mission would last only a year, and many others had this same prompting.

I loved getting to hear and contemplate how God speaks to each of us so individually. Everyone had their own personal experience in which God had spoken to them. He has a purpose for each of us. The fact that God is our loving Heavenly Father who is fully and perfectly aware of each of us and that He continues to speak to us as individuals has been manifested time and time again throughout this COVID-19 pandemic. He has a plan, and each of us plays a distinct role in it. As we continue to trust in Him, listen and hear Him, we become accessible tools He may use in His hands. —Sister Tyler Zion Pratt, Micronesia Guam Mission, from the Payson Utah West Stake 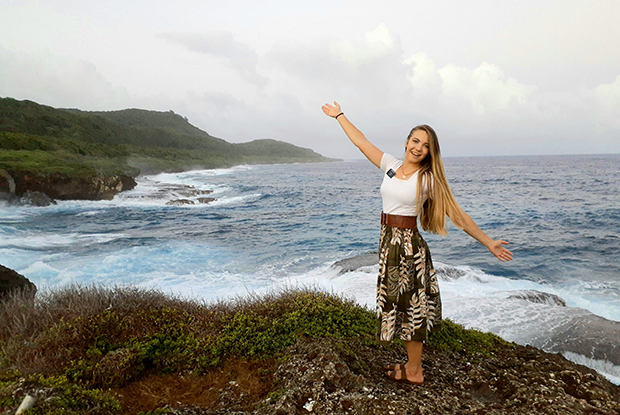 A Disciple No Matter Where

I served one year and six months and always imagined serving a full-term mission. I was progressing as a Portuguese-speaking missionary. In our three-day voyage to get home, I saw hundreds of missionaries smiling and singing songs. In spite of the heartbreaking news, I felt a great sense of concern and love from my fellow missionaries and Church leaders working effortlessly at trying to get us back home.

I am learning that I am the same person and will always be progressing as a disciple of Jesus Christ. It doesn’t matter necessarily where you serve but how you serve. I am learning to be grateful for the service opportunities that I am given and how to use this precious, short time to dedicate to the Lord. I am grateful to Him, who gave me one year and six months to serve in Brazil. We will always be faced with challenging and unexpected setbacks in life, but what matters is our determination and faith in Jesus Christ to continue following His footsteps. —Elder Tanner Cannon Birtcher, Brazil Salvador South Mission, from the Wheaton Ward, Naperville Illinois Stake

Still Engaged in the Lord’s Work

During quarantine times, I know that we are still engaged in the Lord’s divine work. I learned to be more sensitive to the Spirit. By praying and fasting, the Spirit will dwell in us, opening the hearts of those we teach. Loving my companion, remembering the precious nature of souls, and the power of prayer helped me to be closer to Heavenly Father.

I also learned from the crisis about the relationship between character and habits, and these encouraged me to cling to those habits associated with the missionary character and the Christlike life. My humbling experience was to live a healthy lifestyle and serve throughout my life so that the benefits of being a full-time missionary would not be wasted. —Sister Pia Carmina Naungayan Romo, Japan Tokyo North Mission, from the Matina Second Ward, Davao Philippines Stake

Ricardo had been an alcoholic for 15 years, but when he witnessed his mother’s baptism, he wanted to be baptized as well. With prayer and great effort, he made the necessary progress to qualify for baptism.

Six days before Ricardo’s baptism, we learned that all foreign missionaries were being sent home due to the spread of COVID-19. The next day we were quarantined but still able to follow through with set appointments. We visited Ricardo every day and prayed he would be baptized before we went home.

On the morning of the day we were scheduled to fly out, we were blessed to baptize Ricardo. Right after we closed the door to the baptismal font, we received a call informing us we had 10 minutes to be at the mission office for departure. I said we would be there, but we needed to confirm Ricardo a member of the Church first. We confirmed him and literally ran to our house, a short distance away, then went directly to the mission office and straight to the airport. We somehow managed to make the flight.

It was a miracle that I was able to be there just long enough to see Ricardo baptized and receive the blessings of the gospel. It strengthened my testimony to see that Heavenly Father really loves all of his children and has a plan in place to provide for all of them. —Elder Logan Pond, México Cancún Mission, from the Garland Sixth Ward, Garland Utah Stake

Throughout quarantine, I have truly come closer to God. This time is a tremendous gift from the Lord. My companions and I have learned that keeping a missionary schedule and setting goals is still applicable—and even crucial—to an effective day. We still look and act the part and enjoy doing it.

Technology is an incredible tool in the Lord’s work. We’ve been blessed with many miracles online as we’ve reached out to friends across the world. I’ve also become more accepting of using my phone as an effective medium to find and teach people. It has been a great learning curve to learn how to moderate my time, which will in turn bless me throughout my life. This time has truly been a blessing. —Elder Everest Moll, Norway Oslo Mission, from the Sarasota Ward, Sarasota Florida Stake

Time to Be a Beacon

I’m blessed to have the opportunity to still be out here serving the Lord, even though I’m stuck in an apartment. It’s difficult, but I definitely have been able to use this extra study time to deepen my own personal conversion to the Lord.

I’m glad that I can strengthen my testimony and teaching abilities so that when we can go back out and teach, we’ll be able to do even better than before. I know that this time is rough, but I’m seeing it as an opportunity to retighten the armor I wear into battle every day, maybe shine it up a little bit and make it brighter, to help be a beacon leading others to Christ. —Elder Joshua Owens, Micronesia Guam Mission, from the Bonners Ferry Second Ward, Sandpoint Idaho Stake 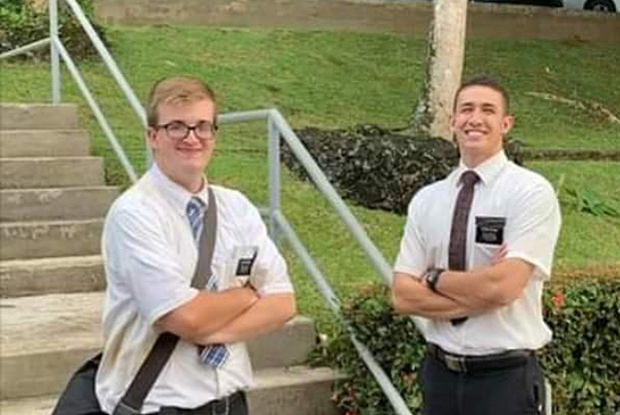