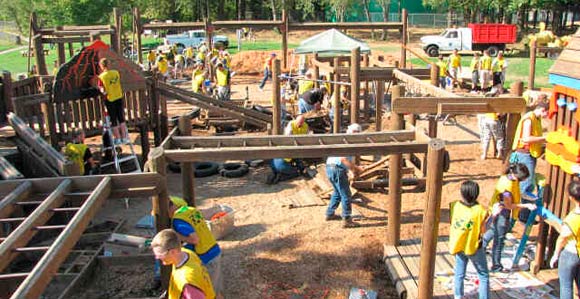 Volunteers from more than 70 stakes in the North America Northwest Area partnered with others to give almost 79,000 hours of service to improve their communities during September.

“Our focus … was to join with civic leaders and our friends of other faiths and unite our communities by providing service to those in need.” —Lois Nelson, Northwest Day of Service co-chair

Thousands of volunteers served their communities in the northwest states of Washington, Oregon, and northern Idaho, as well as British Columbia, as part of the third Northwest Day of Service of The Church of Jesus Christ of Latter-day Saints. Those volunteers, in partnerships with cities, town councils, school districts, food banks, and other agencies, gave almost 79,000 hours to improve their communities.

Elder Richard J. Maynes of the Presidency of the Seventy of The Church of Jesus Christ of Latter-day Saints said, “Day of Service projects have been a great success in providing Christlike service and strengthening our community. This is living evidence of what we are taught in Mosiah 2:17: ‘When ye are in the service of your fellow beings ye are only in the service of your God.’”

Church volunteers linked arms with others—such as members of other faiths, schools, community organizations, and neighborhood agencies—in providing the service. Projects, which mostly occurred on Saturday, September 15, 2012, included large-scale food drives, blood drives, Habitat for Humanity projects, schoolyard cleanup, and cemetery restoration, like the one completed with the Snohomish Ward of the Snohomish Stake.

Members partnered with the Snohomish Historical Society to refurbish and clean up Pioneer Cemetery in town. They cleared brush around grave markers, planted flowers, and helped replace the floor of a pioneer-era cabin on the property. The group was one of many local community organizations that worked on the cemetery.

Chris Gee, Snohomish Historical Society president, expressed gratitude for the many groups who helped prepare the property for the Annual Snohomish Society Home Tour, held the next day, Sunday, September 16, 2012.

A hallmark of the Day of Service efforts is the partnership shared with other groups, especially faith organizations. The Kent Washington Stake partnered with the First Presbyterian Church of Kent to sew “beads of courage” bags and pillowcases for Seattle Children’s Hospital. They also united with Kent Covenant Church, Holy Spirit Catholic Church, and St. John the Baptist Catholic Church to improve the park and grounds in Kent’s Earthworks Park and Senior Activity Center.

Day of Service volunteers also seek to help people in need, especially during tough economic times. Many stakes in British Columbia participated in a large food drive for Canada, collecting more than 350,000 pounds of food to restock food banks.

“We had many neighbors and acquaintances come up to us during the week to say that they are ready to give some food for the drive,” said Dana Gorbahn, director of public affairs for the Terrace District in northwestern British Columbia. “It was nice to have the community recognize our faces as we dropped off the flyers and then picked them up. Homes that didn't get their items out in time for the pick-up actually came to the members’ homes and dropped them off on their doorsteps, know who we are and what service we are doing. It is absolutely a wonderful and enriching experience. Our local food bank said that it couldn't come at a better time and that it was an answer to their prayers.”

Giving back to their communities is another purpose for the Day of Service.

“Our focus in the North America Northwest Area was to join with civic leaders and our friends of other faiths and unite our communities by providing service to those in need. The service rendered was amazing, blessing thousands of lives. Numerous personal and community bonds have been strengthened as existing friendships were enhanced and many new friendships were formed,” said Lois Nelson, co-chair of the Day of Service efforts in the area.

Walla Walla, Washington, Day of Service volunteers worked on the Whitman Museum, a well-known state landmark. They dug about 600 feet of split rail fence, filled about 16 dumpster loads worth of weeds, cleared about 14 dumpsters worth of tree limbs, and hauled off seven tons of broken railroad ties.

Volunteers in northern Pasco, Washington, partnered with the city of Connell to construct four baseball fields.

The Gresham Oregon Stake members and community worked with the city of Troutdale on the rehabilitation of the Imagination Playstation located in Columbia Park. They replaced existing decks, repaired benches, trimmed trees and vegetation, and restored the artwork.

Members of the Graham Washington Stake joined with other faith-based organizations, civic clubs, and community members to weed, clean, and maintain 10 schools and a ball field. They also repainted all the “No Parking” curbs in one city and installed 400 ecology stickers to protect storm drains in another.

Next year’s Northwest Area Day of Service is scheduled for September 14, 2013, although projects will continue through the entire month.