Michael Otterson, managing director of the Public Affairs Department of the Church, speaks at the FairMormon Conference on August 7, 2015.

“Our task is to find language that most accurately reflects what’s on the Brethren’s minds. There is no place for private agendas on the part of the staff.” —Michael Otterson, managing director of the Public Affairs Department of the Church

The Public Affairs Department of the Church does not have its own agenda independent from the leaders of the Church, despite assumptions to the contrary expressed by critics on the Internet, the managing director of the department declared August 7.

Michael Otterson addressed the annual conference of FairMormon, an organization not affiliated with the Church but dedicated to defending it in public against verbal and written attacks.

Brother Otterson said the Church’s Public Affairs Committee is chaired by a member of the Quorum of the Twelve Apostles and includes the senior President of the Seventy, the Presiding Bishop, the Church’s legal counsel, a female officer who is in the presidency of one of the Church auxiliaries, and an additional member of the Seventy who serves as executive director of the department.

“With the executive director, I make presentations to the full Quorum of the Twelve monthly and receive direction from them,” he said. “Sometimes a member of the staff with a particular specialty makes a presentation and receives counsel.

“I mention this because we sometimes have rocks thrown at us by some [Internet] bloggers who love to postulate as to why Public Affairs does this or that. One blogger even referred to Public Affairs recently as a ‘rogue department,’ which would be news to the Brethren. Newsflash: We don’t freelance.” 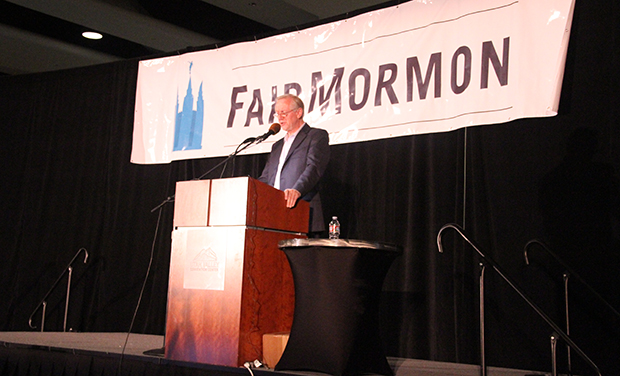 Michael Otterson, managing director of the Public Affairs Department of the Church, speaks at the FairMormon Conference on August 7, 2015 Photo by R. Scott Lloyd.

Brother Otterson said no member of the Public Affairs staff would remain employed long if he or she issued a statement on behalf of the Church that had not been approved.

“Of course, we frequently suggest a response to a breaking issue, but the Brethren are not shy in editing or rejecting those statements or writing their own versions.”

He explained that the member of the Twelve who chairs the Public Affairs Committee will confer with other members of the Twelve or with the First Presidency on major issues. “Our task is to find language that most accurately reflects what’s on the Brethren’s minds. There is no place for private agendas on the part of the staff.”

He gave an example of what happens when that point isn’t understood. When the Church held a news conference this year to call on the Utah Legislature to pass an important piece of legislation pertaining to treating religious rights and gay rights fairly, three members of the Twelve were present.

“Some people actually challenged the validity of the message because there were ‘only’ three members of the Twelve, and not all of them plus the First Presidency,” he said. He then quipped: “Presumably these three Apostles were ‘rogue’ also.’ This so reminds me of the Savior’s critique of ‘blind guides’ who ‘strain at a gnat, and swallow a camel’ (Matthew 23:24).” 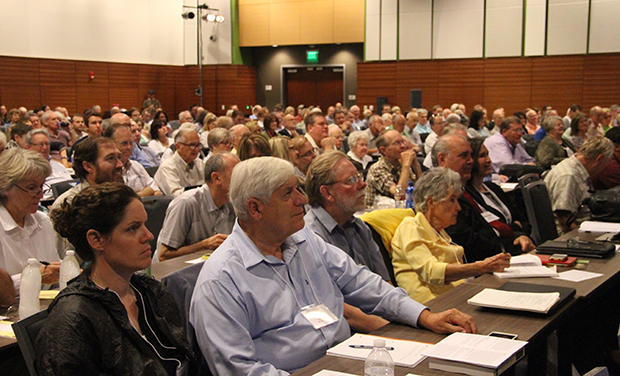 Audience at FairMormon Conference listens to address by Michael Otterson, managing director of the Public Affairs Department of the Church.

Brother Otterson said MormonNewsroom.org and the Public Affairs Department’s Facebook and YouTube channels are among the primary communications media the department uses to disseminate significant news to the mass media and the public.

“Much of what is posted there deals with routine news stories, but even these cannot be posted without approval from Church Correlation, which has the responsibility to ensure that all Church communications are doctrinally sound and consistent,” Brother Otterson said.

This system “should give members of the Church a high level of comfort that what they read on Newsroom has been well vetted,” the managing director said.

He spoke of some of the “big questions” with which the Church leadership must deal as it pertains to public affairs.

“Unquestionably, there has been a more careful and considerate choice of language in the past few years, as the Church has engaged with the pro-gay rights movement,” he noted. “This doesn’t reflect a change in a doctrinal understanding of the purpose of sex, marriage, and the family, or what constitutes sin, but it does reflect a deeper understanding and consciousness among Church leadership.”

The same might be said about cohabitation before marriage of heterosexual couples, he added. “We don’t like it, we discourage it, we teach young people chastity before marriage, but we also understand the reality that most of the world today has different, ever-changing standards or values, and a strident voice from the Church is going to do nothing to change behavior.”

He spoke of the mormonsandgays.org website, prepared in 2012 as a way to address the issue of the experiences of some same-sex-attracted members of the Church, including extreme cases where young people had been ordered out of their homes and had become homeless and destitute, making them prey to drug pushers, prostitution, and even suicide.

The website, “which was carefully scrutinized by the Brethren before it launched, was designed to address that by encouraging parents and other family members to embrace their children, brothers, or sisters while not condoning immoral behavior,” Brother Otterson said.

“The issue remains a difficult one,” he said. “The Church is now working to further develop mormonsandgays.org, and version 2.0 is scheduled for completion and launch early next year.”

Religious freedom is another “big question” confronting Church leadership, he said, particularly as it pertains to advocacy of LGBT rights.

“The Church’s response has been a model of restraint, reasonableness, and Christlike behavior,” Brother Otterson remarked. “While not yielding an inch on our Father’s plan for His children and the purpose of life here on earth, including how sexuality is to be expressed, the Church has recognized the legitimacy of LGBT claims to fair housing, employment, and other services.”

Some people think such a gesture of compassion is tantamount to condoning sin, while others “seem to want to reshape the Church into whatever the latest politically correct social convention says it should be,” Brother Otterson observed.

“Wisely, the Brethren will chart a course that adheres to the doctrine of the Church while emulating Christ’s inclusiveness and love for all people.”

Brother Otterson defined the core function of the department as being “to build relationships with opinion leaders whose influence can either help or hinder the Church’s mission.”

“At the same time, the Church from ancient times has essentially been counter-cultural, which means that it often pushed back against social conventions and established institutions.”

He said the solution to finding a balance between those two seemingly competing principles “is found in following Jesus Christ in every circumstance.”