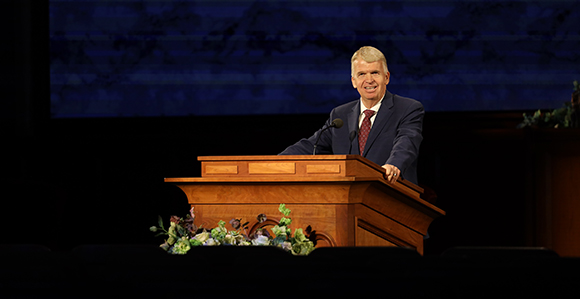 President Dallin H. Oaks of the First Presidency of The Church of Jesus Christ of Latter-day Saints announced a new Young Men General Presidency during the Saturday afternoon session of the April 2020 general conference.

The Young Men General Presidency provides instruction and encouragement in living the gospel of Jesus Christ for male Church members ages 12 through 18. These leaders serve under the direction of the First Presidency and travel frequently to help guide and support the young men of the Church.

President Lund received an undergraduate degree in communications and a law degree, both from Brigham Young University. He worked as an attorney before becoming president and CEO of a large Utah-based cosmetics company. He is currently its executive chairman of the board of directors. He also serves as a regent of the Utah System of Higher Education.

His past Church assignments have included service as a full-time missionary in the Netherlands Amsterdam Mission, mission president in the Georgia Atlanta Mission, coordinator of the Provo City Center Temple dedication committee, member of the Young Men general board, and Area Seventy.

President Lund and his wife, Kalleen, have four children and nine grandchildren.

Brother Corbitt received an undergraduate degree in sociology from Richard Stockton College of New Jersey and a law degree from Rutgers University School of Law. He worked as a trial lawyer, executive director of corporate communications and associate general counsel of a Delaware company, and vice president and general counsel of a New York public relations firm. Brother Corbitt was director of the Church’s New York public affairs office. He currently works for the Church’s Missionary Department.

Ahmad Corbitt was born on August 16, 1962, in Philadelphia. He and his wife, Jayne, have six children and 11 grandchildren.

Brother Bradley R. “Brad” Wilcox was sustained as the Second Counselor in the Young Men General Presidency on April 4, 2020. At the time of his call, he was serving on the high council and as stake young men president in the Provo Utah Grandview Stake.

Brother Wilcox received his bachelor’s and master’s degrees from Brigham Young University (BYU) and his doctorate in education from the University of Wyoming. Nationally, he was honored by the Geraldine R. Dodge Foundation for outstanding contribution to American education. At BYU, he received the Benjamin Cluff Jr. Award for Excellence in Education. He also loves working with programs such as Especially for Youth, Women’s Conference, and campus Education Week. He is the author of the book The Continuous Atonement and the BYU devotional “His Grace Is Sufficient.” He is currently a professor in the Department of Ancient Scripture at Brigham Young University.

Bradley R. Wilcox was born in Provo, Utah, on December 25, 1959. He and his wife, Deborah Gunnell, are parents of four children and eight grandchildren.