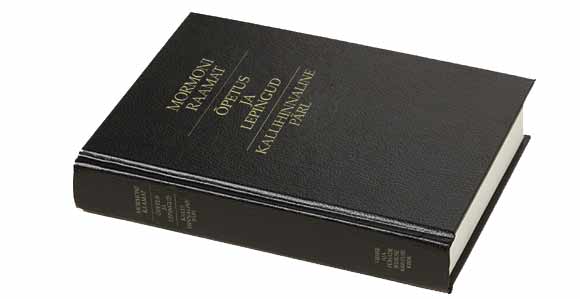 A new triple combination edition of the scriptures, featuring the Book of Mormon, the Doctrine and Covenants, and the Pearl of Great Price bound together in one volume, is now available in Estonian.

The new volume is available immediately from local Church distribution centers, from the Online Store, and online at the scriptures section of ChurchofJesusChrist.org. This edition brings the number of publication languages for the triple combination to 43.

The announcement comes shortly after Church members were reminded of the importance of scripture study when Elder Richard G. Scott of the Quorum of the Twelve Apostles promised in his October 2011 conference address that scriptures “can become stalwart friends that are not limited by geography or calendar. They are always available when needed.”

The Estonian triple combination brings the scriptures of the restored gospel to the more than 1,000 Church members in Estonia and to missionaries, who can share these scriptures with the one million native speakers of the language worldwide.

Previously, the Book of Mormon was the only part of the standard works published by the Church that was available to Estonian Saints. The new triple combination adds the Doctrine and Covenants and the Pearl of Great Price as well as chapter summaries, footnotes, cross-references, and the Guide to the Scriptures. (The guide is an alphabetical listing of scriptural topics, similar to the Topical Guide and Bible Dictionary in the English scriptures, which includes detailed descriptions and definitions, important references, and cross-references to related topics.)

Estonia is home to five congregations of the Church today. The restored gospel was first brought to the country in the late 1980s, when Estonia was part of the Soviet Union. At that time, missionaries from the neighboring Finland Helsinki Mission taught visitors who came from Tallinn, the capital of Estonia. A small branch was organized in Tallinn in January of 1990, just seven months before Estonia gained independence from the Soviet Union—making Estonia the first of the Soviet countries to formally receive the gospel before the union’s collapse.