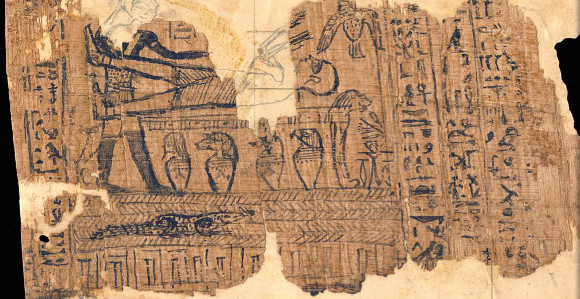 In 1835 the Church acquired papyrus scrolls that had recently been discovered in Egypt. From the scrolls, Joseph Smith began translating the book of Abraham, which is now in the Pearl of Great Price. This is a papyrus fragment from those scrolls dating back to the 2nd century B.C., reinforced with Kirtland-era paper.

The Church History Library has recently placed several new items on display in its Foundations of Faith exhibit. An ancient papyrus, a record of the first general conference, and the handmade sketch that accelerated the construction of temples over the past two decades are among the items that make the Church’s organization and growth relevant to visitors today.

The oldest item that has been added to the exhibit is a fragment of papyrus scrolls, which date from the second century B.C. The scrolls were acquired by the Church in 1835 after having been discovered in Egypt.

The scrolls were sold to multiple parties in 1856, and most may have been destroyed in the great Chicago fire of 1871. Later, 10 fragments were discovered to be held by the Metropolitan Museum of Art in New York City, where Kirtland-era paper was attached to the back side as reinforcement. The fragments were transferred to the Church in 1967.

Visitors can also now see two items from the Church’s first general conference on June 9, 1830. At the meeting, Joseph Smith Sr. was ordained to a ministerial position, and the certificate of his ordination was signed by Joseph Smith and Oliver Cowdery.

Fifteen years later, Lucy Mack Smith dictated a narrative of her life and family. In her history, on the page open to display, she gives emphasis to the priesthood ordination that is documented by the record created at the time of the event.

The “Call to Save Grain” was written in 1876 by Emmeline B. Wells as an editorial in the Woman’s Exponent, which launched a Relief Society program that influences the Church to this day.

The article inspired women to gather and guard wheat carefully, loan it to the poor, and share it in times of drought. These relief efforts expanded in 1906, when the women sent wheat and other supplies to San Francisco after an earthquake and to China during a famine. In 1978, the Relief Society officially transferred its wheat to the Church’s Welfare Services program. The grain storage initiative thus served as a forerunner to the Church’s welfare, family, and humanitarian services programs.

The youngest item in the exhibit is a sketch created by President Gordon B. Hinckley in June 1997. After reflecting on how to help faithful Saints in outlying areas receive the blessings of the temple, he drew a floor plan for a smaller temple with only the essential facilities. He announced the concept at the October 1997 general conference, and by August 1998 the first small temple had been completed in Monticello, Utah. Since 1997, more than 50 small temples have been constructed or announced in 19 additional countries and 17 U.S. states where none had been before.

The exhibit’s self-guided tour pamphlet has been revised to answer common questions, to explain how the documents are preserved, and to draw out stories about the experience and impact of women as well as the Church’s worldwide mission and growth.

The Foundations of Faith exhibit opened in September 2014, promoted a dramatic increase in visitors to the library, and served as the core of an extremely successful youth conference experience last summer. An online version of the exhibit is available here.

The Church History Library is open Monday through Friday from 8:00 a.m. to 5:00 p.m., with extended hours on Thursday evening until 9:00 p.m. and on Saturday from 10:00 a.m. to 3:00 p.m. The library preserves important records so that we may reflect on, write, and understand history. Admission to the library and exhibit is free and open to the public. 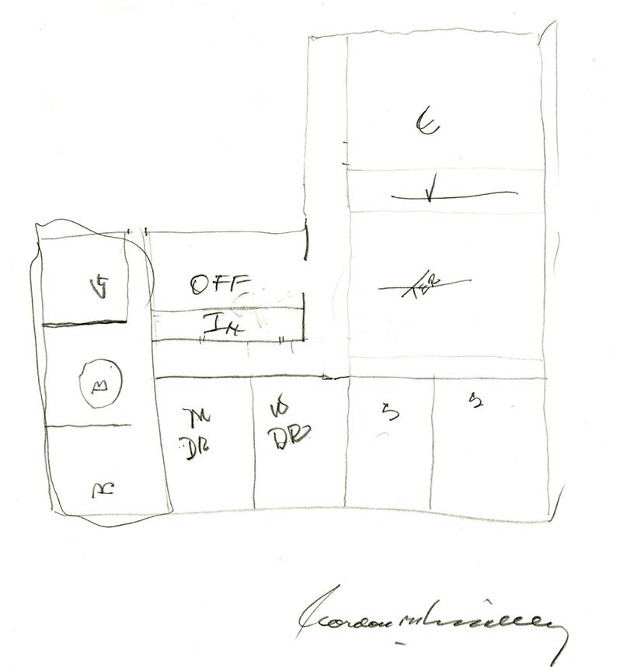 Sketch of temple floor plan created by Gordon B. Hinckley, June 1997. After reflecting on how to help faithful Saints in outlying areas receive the blessings of the temple, he made this sketch of a smaller temple floor plan during an airplane ride. By August 1998 the first small temple had been completed in Monticello, Utah. 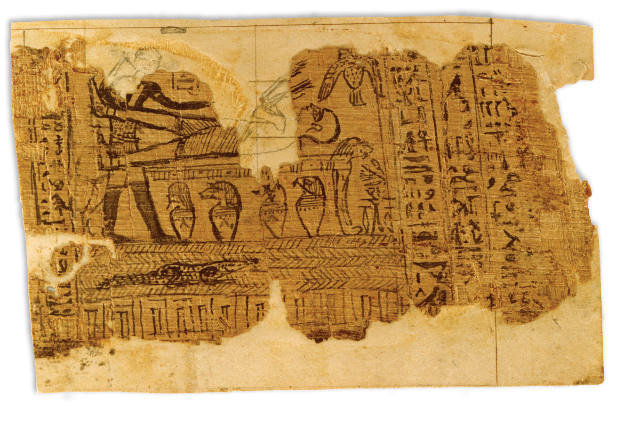 In 1835 the Church acquired papyrus scrolls that had recently been discovered in Egypt. From the scrolls, Joseph Smith began translating the book of Abraham, which is now in the Pearl of Great Price. This is a papyrus fragment from those scrolls dating back to the 2nd century B.C., reinforced with Kirtland-era paper. 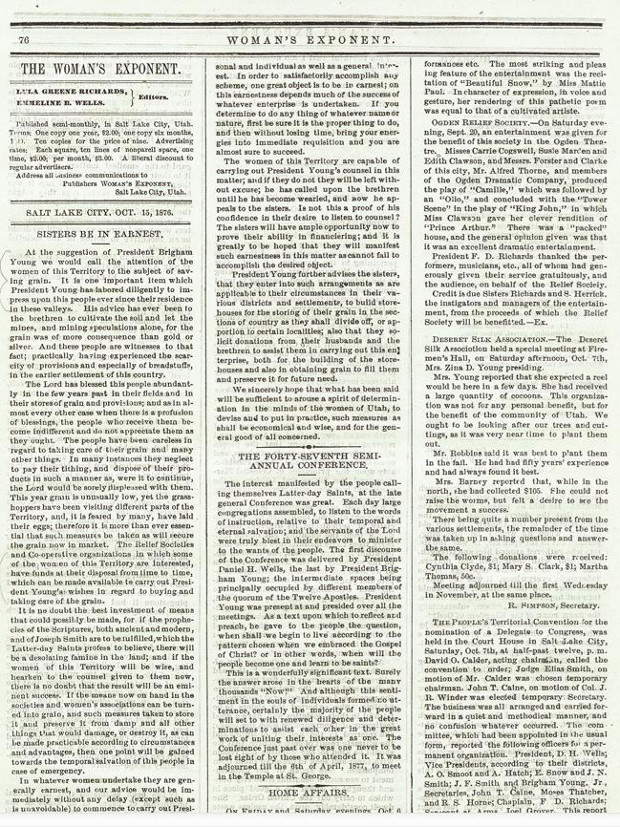 Editorial written in the Woman's Exponent by Emmeline B. Wells about the grain storage program in 1876. She accepted Brigham Young’s assignment to lead Latter-day Saint women in the program and called on readers to act “immediately without any delay.”