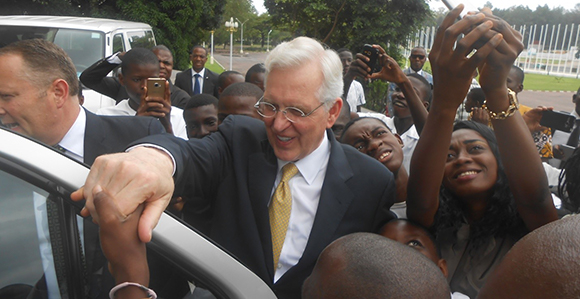 Elder Christofferson in Brazzaville, Republic of Congo, with the African Saints.

While many of the 25 countries that make up the Africa Southeast Area are writing their maiden chapters of local Church history, the area enjoys a long and rich Latter-day Saint past.

The first missionaries arrived in South Africa in 1853, just a little over two decades after the Church was restored. The first baptisms were performed on the continent that same year, and Mormon congregations have existed ever since.

Many member families have lived, worshipped, and served in Africa for generations, particularly in the Afrikaner communities.

Meanwhile, the Church was forever changed in 1978 when President Spencer W. Kimball received a revelation that all worthy males could receive the priesthood. That revelation meant all Africans, regardless of race, could participate in the Church in full.

Members living in the Africa Southeast Area are now prayerfully preparing for their next historical chapter. They are witnessing a new day of temple building in southern Africa. Temples are under construction in Kinshasa, Democratic Republic of the Congo, and Durban, South Africa. And plans have been announced to build a temple in Harare, Zimbabwe.

Elder D. Todd Christofferson of the Quorum of the Twelve Apostles recently visited the Africa Southeast Area and saw, firsthand, the enthusiasm, devotion, and capacity of the members being called upon to usher in this pivotal moment for the Church in southern Africa.

The Apostle’s November 12–November 20 Africa trip included visits to Republic of Congo, Cameroon, South Africa, and Botswana. He was accompanied by his wife, Sister Kathy Christofferson, along with Elder Ulisses Soares of the Presidency of the Seventy and his wife, Sister Rosana Soares. They were joined at various stops by members of the Africa Southeast Area Presidency—Elder Kevin S. Hamilton, Elder Stanley G. Ellis, and Elder S. Mark Palmer, General Authority Seventies.

The visiting Brethren participated in an annual area review at area headquarters in Johannesburg and met with members, missionaries, and local priesthood leaders in a variety of gatherings.

In a discussion with the Church News following his travels, Elder Christofferson said he was impressed and inspired by the strength and maturity of the area’s local leaders and members.

“They naturally look to God and they have great faith,” he said.

For Elder Soares, his recent trip to the Africa Southeast Area reunited him with close friends and familiar faces. He previously served as a counselor in the Area Presidency.

Ministering to members in Republic of Congo, Cameroon

Elder Christofferson and Elder Soares began their tour with a priesthood leadership conference, a missionary meeting, a two-stake conference, and a young single adult devotional in Brazzaville, Republic of Congo.

The November 13 YSA devotional “was one of the best of that kind that I’ve ever participated in,” said Elder Christofferson. “There was a wonderful spirit. I hated to end that meeting—it was a very special experience.”

The next day included a Monday missionary meeting and a member meeting in a rented facility in Yaounde, Cameroon. Despite it being the beginning of the workweek, hundreds took time off from work or, for some, traveled far distances to take part in the meetings.

“We were able to shake hands with all of them,” said Elder Christofferson.

Elder Soares said many of the Cameroonian members sacrificed much so they could be with Elder Christofferson.

“This was a unique experience,” he said. “For most of the members, it was the first time they had seen an Apostle. It was a blessing for them to listen to Elder Christofferson’s testimony of the Savior.”

On to South Africa and Botswana

The annual area review offered Elder Christofferson and Elder Soares opportunities to assist the Area Presidency in their efforts to serve the members of southern Africa.

The review “was extremely useful,” said Elder Christofferson. “The presidency is wonderfully united in their work.”

Much of the area review focused on preparing for the new temples that will soon provide many members regular access to the temple for the first time. For many, the Johannesburg Temple has been all but out of reach. The Temple Patron Fund has allowed some families to claim their own temple blessings with a single visit. But travel costs and, in some countries, challenging visa requirements have kept many faithful members from returning to the temple.

The new temples are also expected to bless and invigorate missionary efforts across the area.

“The work is growing because the African people are very religious,” said Elder Soares. “When the missionaries arrive with the message of the restored gospel, many feel that what they are being taught is true.”

Elder Christofferson noted the area’s ongoing success in retaining new members following their baptisms. Fourteen new stakes have been created in the area over the past 2½ years, and a devoted corps of Area Seventies and other local priesthood leaders are ministering to the needs of the members.

During their time in South Africa, the visiting Brethren also enjoyed meeting with Johannesburg Mayor Herman Mashaba and his wife, Mrs. Connie Mashaba. Elder Christofferson presented the Mashabas—who have been married for more than 30 years—with the Church’s Family Values Award. “They were quite moved to receive the award,” he said.

The Africa tour concluded with priesthood leadership conferences and member meetings in Botswana and South Africa.

At each meeting Elder Christofferson, Elder Soares, and the Africa Southeast Area Presidency listened to earnest questions from priesthood leaders and members about how to best serve others while finding balance in their busy lives. The Brethren taught the importance of developing faith in Heavenly Father and Jesus Christ, observing the Sabbath, working effectively in councils, and obeying the law of the fast.

Building strong families through daily family prayer and scripture study should be the goal across the area, said Elder Christofferson.

“The best thing I did as a father was to help my children recognize the voice of the Spirit by reading the scriptures together every day.” 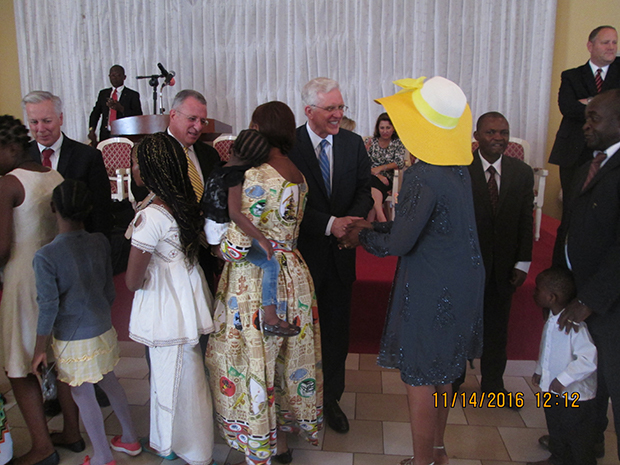 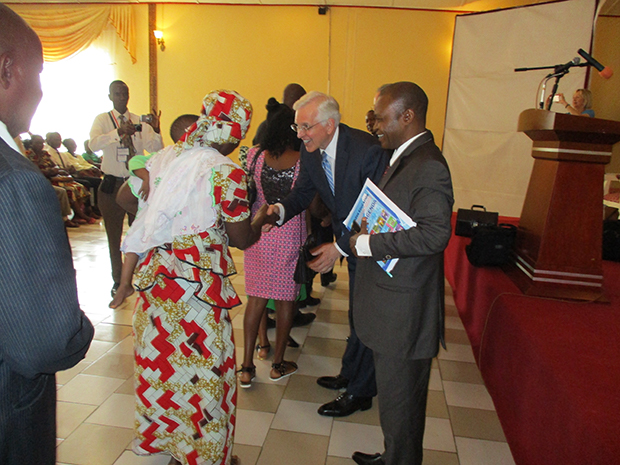 Elder Christofferson greets a mother and baby in Yaounde, Cameroon. 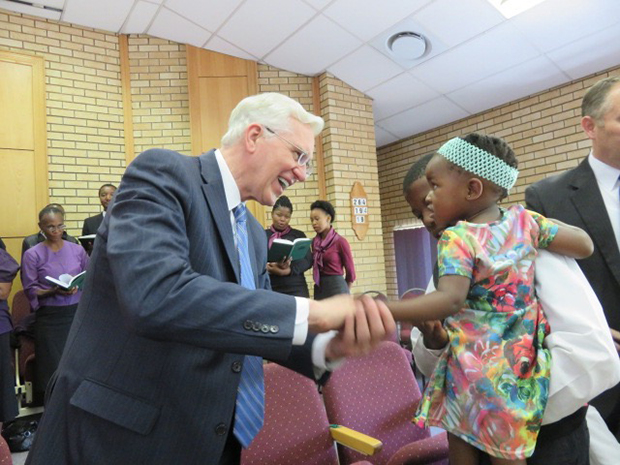 Elder D. Todd Christofferson during a trip to the Church’s Africa Southeast Area in November 2016. 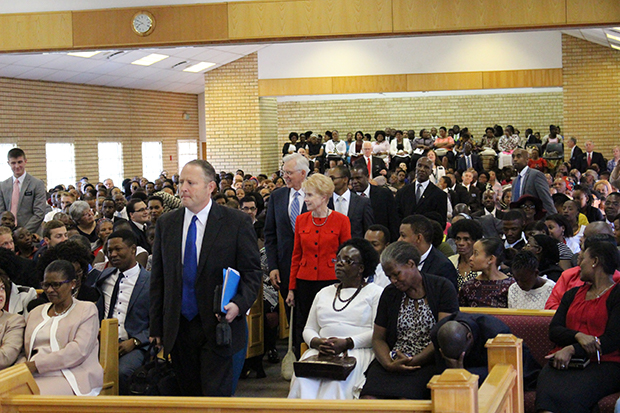 Elder D. Todd Christofferson and Sister Kathy Christofferson arrive at one of the many meetings they attended and addressed during their trip to the Church’s Africa Southeast Area in November 2016. 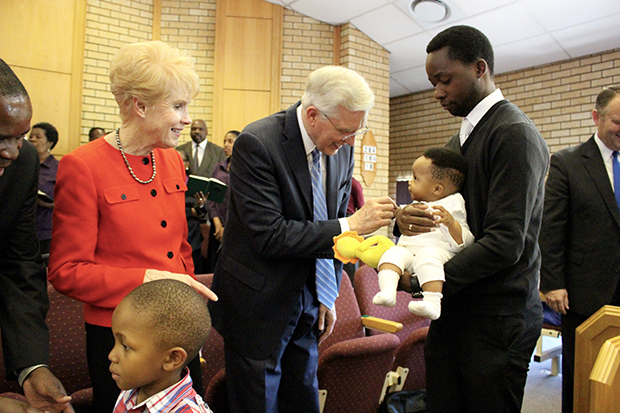 Elder D. Todd Christofferson, with his wife, Sister Kathy Christofferson at his side, takes time to admire a baby during their trip to the Church’s Africa Southeast Area in November 2016. 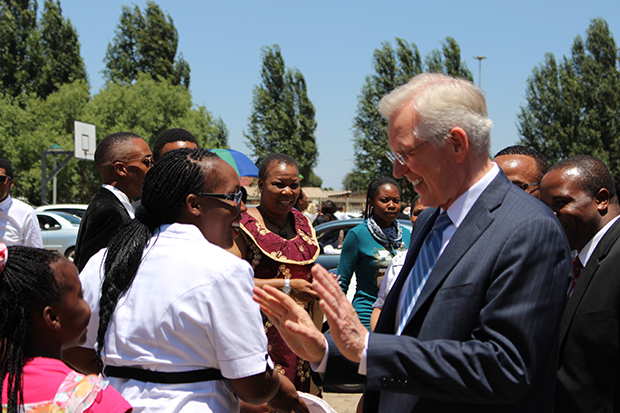 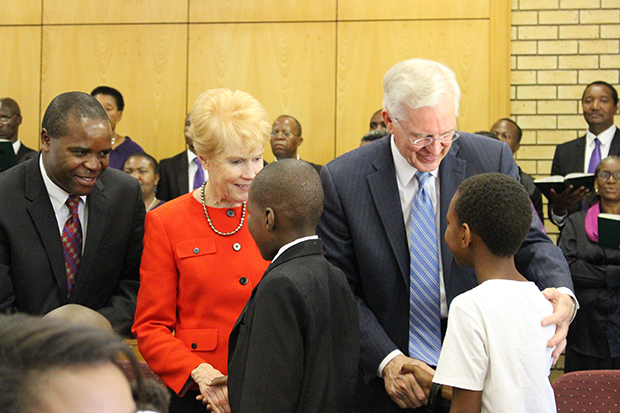 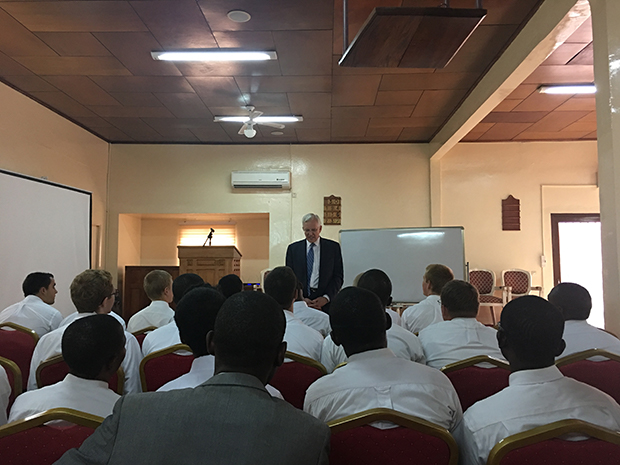