New Temple Presidents Testify of the Power of the Temple 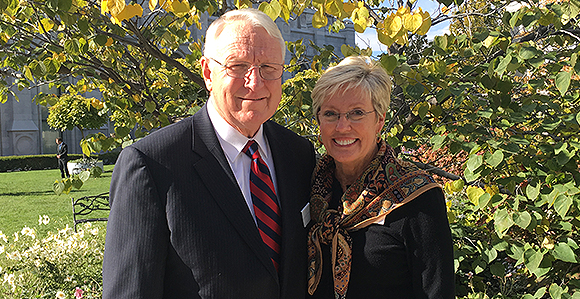 “[The temple] is a house of revelation. The Lord is in the temple.” —Sister Amparo G. Revillo, matron of the Manila Philippines Temple

For the 36 couples participating in the 2017 Seminar for New Temple Presidents and Matrons on October 9–12, their new assignments entail far more than full-time administrative duties.

Each calling, they say, doubles as a sacred charge to help others realize and enjoy the blessings found only inside one of the Church’s dedicated temples.

The new temple presidents and matrons bring their own life-changing, personal temple experiences to their respective assignments. Four couples attending the seminar shared their testimonies of temple worship with the Church News.

“The Lord is in the temple”

President Carlos C. Revillo Jr. was a young father in the Philippines when he offered a simple prayer. “I was thinking about my life. I had no direction. I asked the Lord.”

President Revillo knew this was the time “to be serious about his life and his family.”

His prayer was answered when Latter-day Saint missionaries knocked on his door.

“He was really searching for the truth,” said Sister Amparo G. Revillo.

He was baptized in 1971—one decade after missionaries entered the Philippines and two years before the first stake was organized in the country.

Two months later, Sister Revillo followed. She read the Book of Mormon and took notes as if she were studying for a test.

The couple’s dedication was so strong that when they were paid they walked directly to their priesthood leader’s home and paid their tithing before buying anything else so “we were not tempted to spend it.” They walked to church because they could not afford a tricycle vehicle and traveled eight hours by bus to attend district conference four times a year.

When President Revillo got a good job, his employment took them from city to city in the country. In one location the couple—and their six children—awoke at 4 a.m. to catch the bus in time for 8 a.m. Church meetings. In another city, they had to cross a river without a bridge to attend meetings. But by afternoon, the river ran too high and the couple spent the night in a truck until they could safely cross again in the morning when the river receded.

“It was not a sacrifice,” said Sister Revillo. “We were so excited to go to church.”

The temple, Sister Revillo said, “is a house of revelation. The Lord is in the temple.”

“The temple is a place of healing’”

President Gardner rushed his wife and missionary companion to the hospital, assuming she was dealing with appendicitis. The diagnosis was far more grim.

“We were told she had terminal cancer and didn’t have long to live,” he said.

“You realize that life has a lot of surprises,” he said.

But President Gardner knew he was never alone in his grief. He was loved and supported by his family, friends, and fellow members—and found divine comfort inside the temple.

The temple allows people to receive essential covenants and ordinances for themselves and others.

“But the temple is also where we go when we need to be comforted or reassured,” he said. “It is the place to go and receive inspiration and motivation in life and to see clearly what the Lord would like you to do.”

Many of President Gardner’s most joyful moments have occurred in the temple. He and Rowena were sealed in the Cardston Alberta Temple. Years later, his children introduced him to his second wife, Teresa. They were sealed in the Salt Lake Temple.

“The temple is a place of healing,” said Sister Teresa Gardner.

Their service in Tijuana offered the Gardners daily opportunities to see families sealed together for eternity in the temple.

“There is nothing like seeing parents sealed to their children—all dressed in white and kneeling at the altar,” said Sister Gardner.

In November, the Gardners will begin their respective assignments at the Madrid Spain Temple.

When President Beaver Ho Ching was still a little boy, his family relocated far from their home in American Samoa.

“We moved to Hawaii when I was 9 years old so our family could be sealed in the temple,” he said.

That dramatic decision impressed upon young Beaver the importance of the temple. Since that day, it has remained his life’s anchoring edifice.

“My wife, Judy Ann, and I go to the temple once a week, and every time I walk out of the temple I feel so good,” he said. “There is no place I would rather be than at the temple.”

President and Sister Ho Ching will serve as the president and matron, respectively, of the Apia Samoa Temple.

Sister Ho Ching was baptized when she was 16. She soon discovered that the temple was a place she could call a second home.

“The temple became a special part of my life when I was single,” she said. “I just enjoyed being there.”

After the Ho Chings married, they started a family, settled in Utah, and developed a business. But the temple remained their guiding compass. Both have worked in the temple, and President Ho Ching helped organize the 2005 dedication of the rebuilt Apia Samoa Temple when he was serving as an Area Seventy.

They are anxious to serve alongside the Samoan Saints.

“The Samoan culture is all about families,” he said. “And it is in the temple that families can be sealed for time and all eternity.”

Sister Ho Ching added she “is excited to learn what the Lord expects for me to do.”

“No place on earth I would rather be”

When Sister Rosemary M. Wixom was called to be Primary General President, her husband, Jack Wixom—a former mission president in Washington, D.C.—needed a way to spend his time. He turned to the temple. Each time he served in the temple he felt like he was “coming home.”

He loves to observe the temple patrons and “look into the faces of people of all colors, races, and walks of life.” He finds in each one “the glow that comes from the Savior.”

Now he and Sister Wixom—the newly called president and matron of the Salt Lake Temple—are excited to serve together in the “most precious asset the Church has—the Lord’s house.”

“Sacrifice is a huge part of the temple,” said Sister Wixom. “We have watched people all over the world make huge sacrifices for the temple. That same sacrifice happens when the temple is across the street. We not only give our time, but give our hearts to the temple.”

Although any service in the Church comes with personal and family sacrifice, the Wixoms testify that “it will work out.”

“We have observed how the Lord allows you to serve. He puts in place the circumstances that allow a person to serve.”

The Salt Lake Temple—which took 40 years to build—is a symbol of sacrifice, said Sister Wixom. “Every nail, every drop of paint, every structural design and molding … was created at great sacrifice,” she said, noting that many who worked on the temple did not live to see it dedicated.

“There is purpose in building an edifice of such beauty and power, because it uplifts all who come,” President Wixom said. It is the same with our lives, he added. “There is no place on earth I would rather be.” 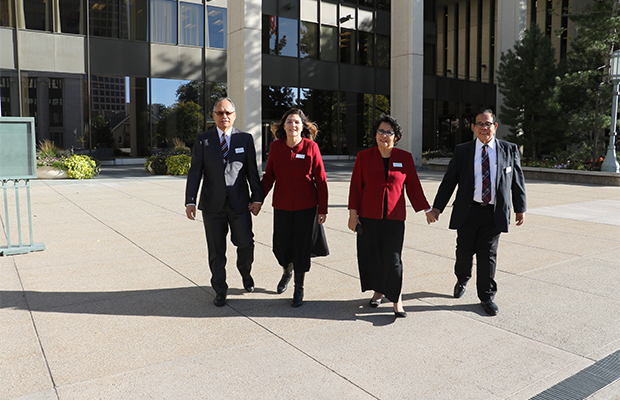