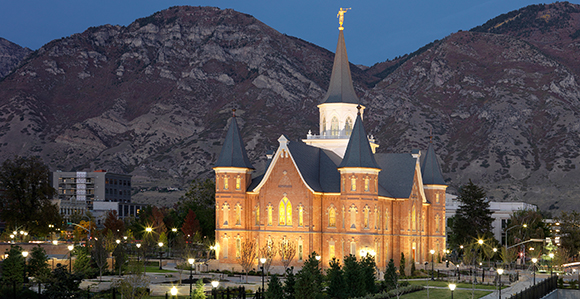 “The temple becomes the bridge between this life and eternal life that lies beyond. The reverence we will feel today as we step into the temple reflects its purpose.” —Rosmary M. Wixom, Primary general president

Constructed from the burned-out ruins of the Provo Tabernacle, the new Provo City Center Temple pays affectionate homage to the pioneer legacy of that former structure even as it fulfills the divine purpose of a house of the Lord.

Tours in anticipation of the March 20 dedication of the new edifice commenced January 11. News media representatives toured the interior of the structure following a news conference.

“There has been a lot of interest in this temple in particular because of its history and also because it’s the 150th operating temple in the Church,” said Elder Kent F. Richards of the Seventy and Executive Director of the Temple Department.

“As you may remember, back in 1998, President Gordon B. Hinckley announced that the goal was to complete 100 temples by the year 2000,” he said. “That was quite a feat because, at the time, there were only 51 temples, and two years later, in October of 2000, he dedicated the Boston Temple, making the 100th temple.

“Now, since that time, we’ve completed another 50 temples, with 23 temples more under construction or in design and planning. We are a temple-building people.”

The purpose of temples, he said, is not just to have beautiful buildings “but to provide an opportunity for members around the world to come and receive sacred ordinances that we consider necessary for our eternal salvation. If we didn’t have a belief in the eternity of the soul, there would be no need for temples. But because we believe what we do here carries on into the next life, that’s the reason we have these beautiful temples.”

Noting the new temple’s historic connection, Elder Richards remarked, “Everyone in this community can tell a story of how many times they’ve been here and all these events that took place in the Provo Tabernacle dating back to the 1880s.”

He quoted from the journal of his own second-great-grandfather, Elder Franklin D. Richards of the Quorum of the Twelve Apostles: “In Provo I met with the saints of the Utah stake in their new stake tabernacle with temporary seats and no windows and doors yet.”

The tabernacle was used from 1883, when it was begun, to 1898, when it was dedicated, Elder Richards told the news media. “They even held a general conference of the Church here in 1886 and 1887. And it just so happened that my second-great-grandfather Franklin presided in 1886, being the senior Apostle here at the time.

“He wrote in his journal in 1897, on July 4, [not long] before he passed away in 1899: ‘Provo Tabernacle was well filled, and I spoke one hour and 35 minutes, testifying of the great Prophet Joseph Smith and his infinite labors for the living and the dead.’

“Isn’t it interesting that he chose to talk about temple work, perhaps having had some prescient inspiration that this would become a temple one day.” Elder Richards spoke of the fire on December 17, 2010, that destroyed the structure and said, “It was exactly five years to the day later that the temple was completed and turned over to the Temple Department, December 17, 2015. And here we are preparing for the dedication.”

Elder Richards said open house visitors will see many reminders and markers of the historic nature of the building. “You’ll see beautiful chandeliers. You’ll see beautiful art glass, … millwork and furniture and carpets and decorations of all kinds. In fact there are 19 original pieces of art in this temple, many of them donated by local artists. And it is in a way a memorial to the past, but now we will look forward to the future, its function and use as a temple.”

Sister Rosemary Wixom, Primary general president and a member of the Temple and Family History Executive Council, also spoke at the news conference.

“Although we speak of families united here for eternity, the sacred temple experience is very personal and very individual,” Sister Wixom observed. “The temple becomes the bridge between this life and eternal life that lies beyond. The reverence we will feel today as we step into the temple reflects its purpose.”

That purpose, she said, is three-fold: “to turn hearts to the Savior Jesus Christ, to unite families, and to provide sacred ordinances necessary for salvation.”

Entering the temple for the tour, visitors went directly from a parking garage constructed below the grounds into the foyer of one of two main entrances.

Conducting the tour, Elder Richards said 58,000 square feet of the edifice is below ground, compared with 15,000 square feet on each of the two upper levels that cover the above-ground footprint of the former tabernacle.

The baptistry and associated dressing rooms are among facilities located on the lower level.

On one of the upper levels are two instruction rooms for the first portion of the endowment, each with murals depicting the Creation, the Garden of Eden, and the world. Robert L. Marshall and James Christensen, two local artists who have been associated with Brigham Young University, painted the murals in the respective rooms, representing indigenous lake and mountain scenery and wildlife. In one of the rooms is a cougar, which visitors might associate with the well-known BYU mascot.

From one or the other of these rooms, temple patrons ascend one of four spiral staircases to an instruction room that leads ultimately into the temple’s celestial room.

An ornate grand staircase leads patrons from dressing rooms to a chapel, where they will wait for the beginning of the endowment session.

Also on the upper levels are five sealing rooms of varying capacity, a bride’s room, administrative offices, and the four spiral staircases.

A noteworthy feature in the temple is art glass in the foyer of the main entrance on the ground level. It depicts the Savior surrounded by sheep and holding a lamb. It came in three pieces from a Presbyterian church in Brooklyn, New York.

Elder Richards said local artisan Tom Holdman put the pieces together and augmented them with art glass melted down from fragments from the windows of the tabernacle.

Sister Marsha Richards, accompanying her husband in conducting the tour, said Brother Holdman had corrected cracks in the glass forming the image of the lamb in the Savior’s arms and that he saw significance in that relating to how the Savior mends the lives of those who come unto Him.

Elder Richards pointed out that the only fragment of furniture carried over from the tabernacle into the temple is a 4-inch piece of hand-carved wood that is part of the podium in the chapel.

The columbine flower is a unifying motif throughout the temple, seen in windows and carpets.

Open house visitors will begin their tours by viewing a specially made video about the purpose of temples. They will finish in the lower level of the pavilion, where they will see an exhibit of artifacts recovered when the site was being excavated, either from the tabernacle or from an adjacent meetinghouse and baptistry that predated the tabernacle.

Also on display is a timeline covering the tabernacle and temple as well as a time-lapse video of the temple construction.

An online exhibit, created by the Church History Department, “Tabernacle to Temple: Provo’s Legacy of Worship,” may be viewed at history.ChurchofJesusChrist.org.

Some 450,000 tour reservations had already been made, but Elder Richards said an additional 150,000 would be opened to accommodate public interest anticipated to come from media coverage. Reservations may be made at templeopenhouse.ChurchofJesusChrist.org.