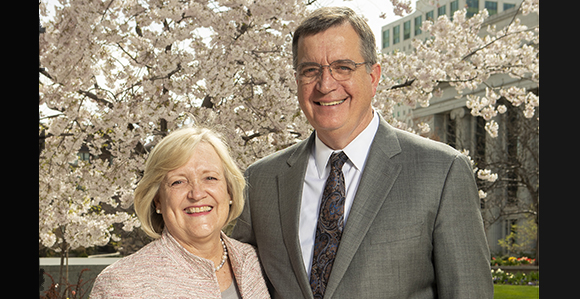 “We trust the Lord, we trust His wisdom, and He has called us—we are going to do our very best and trust He will make us equal to the task.” —Brother Mark L. Pace, Sunday School General President

Brother Mark L. Pace remembers the moment at age 12 when his mother asked him a direct question—creating both a challenge and an opportunity that helped shape his life and prepared him for his recent call as the new Sunday School General President.

“My mom said to me, ‘Mark, has the Holy Ghost told you that the gospel has been restored and that the Church is true?’

“I was a little embarrassed, but it got me going,” Brother Pace remembered, adding, “I became a changed person because of that.”

The reading, praying, and asking seemed a tall order for a preteen, but he remained diligent.

“I felt peace,” he said, explaining that the feeling of peace that he felt then as he started his reading of the Book of Mormon—just as he did at the conclusion of his reading then and his ongoing reading and seeking the truth through his efforts since—was from the Holy Ghost.

“My [mom’s] vision that there’s something better than just going along to Church was a very meaningful experience for me,” he said.

Brother Pace learned then, as well as a few years later as a full-time missionary serving in the Spain Madrid Mission, that nothing is too hard for the Lord, that with His help, all things are possible.

He cited one afternoon, in his first assigned city in Spain, when the missionaries had returned to their apartment for lunch and he was gazing out the window while reflecting on the reality of missionary work. “This is hard,” he told himself. “I’m not going home, but this is really hard—gut-wrenching hard.”

Then his companion called for them to go out and resume their work. “So we knelt together in prayer and then went out to serve and change the world,” he said. “And I never again felt what I had felt at that moment. I loved my mission—it changed my life.”

The commitment to the gospel and the willingness to do hard things became a lifelong template.

“If we follow the prophet, nothing is too hard for the Lord,” Brother Pace said. “And it doesn’t matter what the circumstances are in the world in which we live; the Lord will be with us, and He’ll lift and prosper and bless us.”

Mark Leonard Pace was born January 1, 1957, in Buenos Aires, Argentina, the fourth of 10 children of Lorin Nelson Pace and Marylynn Haymore Pace—and the first of several joining the family as the Paces presided over the Argentine Mission in the late 1950s. They returned to raise their family in Holladay, Utah, a suburb of Salt Lake City.

That was where Mark Pace first met Anne Marie Langeland—as second-grade classmates in elementary school, moving up each grade together and attending adjoining wards that worshipped in the same meetinghouse.

“He wasn’t in my circle of friends, but we knew who the other was,” she said, noting that after the sixth grade, she and her family moved to Salt Lake City’s Avenues neighborhood.

When Anne Marie was in her senior year at East High School, her seminary teacher, Terry Baker, proposed a seminary dance with another area school, Olympus High, where he had taught the year before.

“‘I’ve saved my favorite student for you,’” she remembers being told as he paired her up for a date with someone from Olympus—her old elementary-school acquaintance Mark Pace. “At first I said, ‘I don’t think so; I know him—maybe line me up with someone I don’t know.’”

She got the green light from her mother when she mentioned the date and the Pace name, her mother having known his mother from previous stake Relief Society interactions.

He remembers almost shrugging off the activity when the sign-up sheet was passed around in seminary, preferring to focus on his playing on the Olympus basketball team. But feeling a prompting that the seminary class president should probably participate in the seminary-sponsored activity, he retrieved the paper and made himself available for the event.

And she remembers the first date—and its January 11, 1975, date. “It took me a few minutes, but I thought, ‘Wow, this is something special.’”

After high school graduation, Mark Pace and Anne Marie Langeland again found themselves separated—she moving to Norway to accompany her parents on a mission assignment and he leaving soon thereafter for his mission in Spain. This time, they stayed in contact through sharing letters and resumed dating upon their respective returns, getting engaged six months later and then marrying in the Salt Lake Temple on November 21, 1978.

Brother and Sister Pace are the parents of seven children, again the result of following counsel that might seem hard for some—to start a family after marriage while pursuing education.

“Trying to do that was a great blessing to us, our family, and our lives,” Brother Pace said. “The greatest harvest of our lives, the greatest jewels and the greatest joys are our children and our grandchildren.”

Brother Pace enjoys sports, hiking into the Grand Canyon and crossing over the Uinta Mountains, and raising chickens. The latter he started as a teenager with an uncle and his brothers in breeding the fowl for proper body shaping and coloring.

“It’s relaxing and an escape from the world,” he said, to collect eggs for the hatchery, watch baby chicks emerge several weeks later, and then “grow them up” over the summer to see which ones have the desired shaping and coloring to keep and to show in the state fair or poultry association events. His breeds include Old English Game bantams, light-brown leghorns, and Rhode Island Reds.

“But that’s not our life,” he said of hobbies, interests, and activities. “Our life is the gospel, our marriage, and our family.”

Leading the Spain Barcelona Mission and its 480-plus missionaries from 2012 to 2015 was “a life-changing experience” for the Paces. “Their faith and devotion to the Lord was an inspiration to us and a great blessing to the preaching of the gospel,” said Brother Pace of their missionaries. “We rejoice as their lives move forward, building Zion in their families and communities.”

With this latest chapter in their lifelong service, the Paces look forward to teaching and learning opportunities with others.

“We hope to help people have some smiles and enjoy the journey along the way,” Brother Pace said, “but we’re very serious about our discipleship. These are not times for casualness, because of the challenges we’re facing in the world and facing as a household of Saints.” 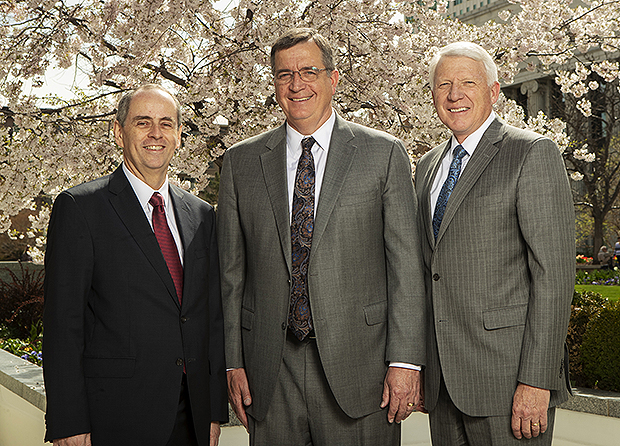 And he recalled once again his mother’s prompting when he was 12. “Just coasting then wasn’t good enough, and it’s not good enough now. The Lord is moving forward His work, and if we can bless, support, and encourage, we’re happy to lend everything.”

Brother Pace added, “We trust the Lord, we trust His wisdom, and He has called us—we are going to do our very best and trust He will make us equal to the task.”

Such was a prayerful commitment just prior to his call as Sunday School General President.

“Heavenly Father, whatever Thou wouldst have me do, I’m happy to do it. Just know that I’m all in. . . . We want to give everything we have.”