New Seventy Elder John A. McCune Trusts that the Lord Is in the Details 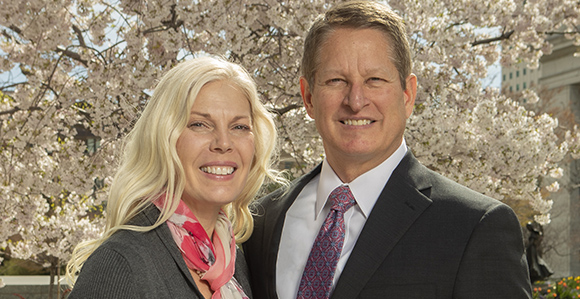 Sister Debbra Kingsbury McCune and Elder John A. McCune pose for a photo at the Church Office Building in Salt Lake City on Monday, April 8, 2019. Elder McCune was called to serve as a General Authority Seventy.

“We are disciples of the Savior Jesus Christ, wherever we are, in any setting, in any opportunity.” —Elder John A. McCune, General Authority Seventy

Early in his business career, Elder John A. McCune recalls a conversation he had with his boss in which it quickly became clear the man didn’t know much about The Church of Jesus Christ of Latter-day Saints. In fact, Elder McCune realized the man probably wouldn’t have hired him had he known he was a member.

“Obviously I eat cookies,” Elder McCune said with a smile, rubbing his stomach. “I think you have us confused with another church.”

As they talked, Elder McCune clarified misconceptions about the Church and put the man at ease, which led to other positive conversations about the gospel of Jesus Christ.

The experience reaffirmed for Elder McCune the importance of always being ready to share the gospel with others.

“We are disciples of the Savior Jesus Christ, wherever we are, in any setting, in any opportunity,” Elder McCune said. “We have jobs and careers, but it’s there to support our families and put us in situations to share the gospel. That’s our primary responsibility as disciples of Jesus Christ.”

Elder McCune was one of 10 new General Authority Seventies sustained in the April 2019 general conference.

John Allen McCune was born in Santa Cruz, California, on June 20, 1963, to Clifford McCune and Joan Fuhriman Schulthies. He was primarily raised in Nyssa, Oregon, where he grew up irrigating, bucking hay, fixing fences, and working cattle.

Elder McCune, the youngest of six children, was six years old when his parents were divorced and his father became less active in the Church. His mother later remarried a widower with eight children, creating a new family of 14 children. Her example of selflessness and dedication to the Lord bolstered his testimony while his stepfather, Ray Schulthies, became an example of hard work and consecrated priesthood leadership.

Elder McCune’s own father was never again active in the Church, but before he died, Elder McCune would periodically drive 12 hours to visit him, do handyman repairs around his house, and take him out to eat. In his father’s last hours, Elder McCune saw a light in his eyes that strengthened his faith that things would work out.

“He would tell me there wasn’t a God, but toward the end of his life, he began to soften a little,” Elder McCune said. “When he was failing I asked him, ‘Dad, what can I do for you?’ He said, ‘Just pray for me, son.’ For a professed atheist with liberal views to say that at a critical moment of his mortality and ask a son to pray for him I think is pretty significant. So we have hope.”

The foundation of Elder McCune’s testimony was established at age 15 or 16 as he attended seminary and read the Book of Mormon. It was later cemented as a freshman at Ricks College (now BYU-Idaho) when living on his own for the first time. He recalled sitting in his apartment and having a “profound experience” as he listened to general conference in October 1981, he said.

“Throughout my life I’ve had a series of wonderful experiences that have further cemented and secured my conversion,” Elder McCune said.

Elder McCune met his future wife, Debbra Ellen Kingsbury, at Ricks College that same fall. They became good friends and shared a unique experience when she became sick and requested he give her a priesthood blessing.

Elder McCune, then 18, was a newly ordained elder and had not given a blessing before, but was somewhat ready because he’d just given a lesson on priesthood ordinances in elders quorum. Sister McCune grew up in a less-active home and her father died when she was 14, so the first blessing she ever received turned out to be from her future husband.

“Of course neither of us knew that we would later be married,” Elder McCune said. “But it was a neat experience.”

After serving in the Japan Fukuoka Mission, Elder McCune reconnected with Debbra Kingsbury at Brigham Young University when she helped him find housing in her same apartment complex and ward. About four months later, the couple was engaged to be married.

The McCunes were married in the Salt Lake Temple in 1984. Today they live in Midway, Utah, where they are the parents of four children and the grandparents of eight grandchildren.

Elder McCune received a bachelor of science degree in finance from BYU and later earned a master of business administration in finance from the University of California, Los Angeles (UCLA).

Just as Elder McCune was starting his career, he had an experience that caused him to doubt what he was doing. One day he was scheduled to meet with a successful cardiologist and discuss the man’s investments. But the cardiologist was late because he was saving a patient’s life. What seemed so important to Elder McCune before left him feeling deflated. For the next few months he questioned his career path and wondered if he should be doing something more significant with his life, he said.

Then one day while commuting to work, Elder McCune said the Lord taught him an important lesson that changed his outlook.

“The Lord communicated to me that he needed investment managers,” Elder McCune said. “He needs accountants, plumbers, archaeologists, or whatever in every arena because there are people who need to learn of Him and the gospel from His disciples. My primary responsibility was to be a husband, father, and a disciple of Christ, but it was OK for me to be an investment manager. That changed the way I began to view my work relations and career.”

As Elder McCune completed his MBA program at UCLA, he and his wife had another powerful experience that strengthened their trust in the Lord.

Elder McCune received a “dream job” offer from American Airlines to work at its corporate office in Dallas. They also found an affordable home in a beautiful neighborhood. As they flew back to California, it appeared everything was falling into place for an exciting new life. The only thing left to do was pray and receive the Lord’s approval, he said.

But when they prayed, the clear answer was not to take the offer. While greatly disappointed, they followed the Lord’s counsel, Elder McCune said.

About six months later, when they would have been preparing to move to Dallas, Elder McCune was again commuting in the Southern California traffic, praying for direction, when an answer came that it was OK to move. He felt impressed to call American Airlines back and learned a position had just opened up. He was offered the job with better pay. Then upon returning to Dallas, the McCunes found the same “perfect” home was still for sale at an even lower price. They were able to move in right away.

If we are willing to trust the Lord, He will orchestrate the details of our lives, Elder McCune said.

“We learned a profound lesson in trusting God,” Elder McCune said. “It doesn’t always work out that way, we understand that, but our faith and obedience always leads to blessings. We don’t know what those blessings are, and we don’t know the timing. A challenge of mortality is learning to trust enough to know that even though things might not make sense, if we listen to Him, He’ll guide and direct our lives, and it will be OK.”

Elder McCune went on work as the senior vice president and managing director for Capitol Investment Advisors before becoming a donor liaison for principal gifts with The Church of Jesus Christ of Latter-day Saints Philanthropies.

“We are deeply grateful to our Heavenly Father who has led and orchestrated our lives, often in ways that we just could not foresee,” Elder McCune said.