New Missionary Handbook Is about Becoming a Disciple of Christ 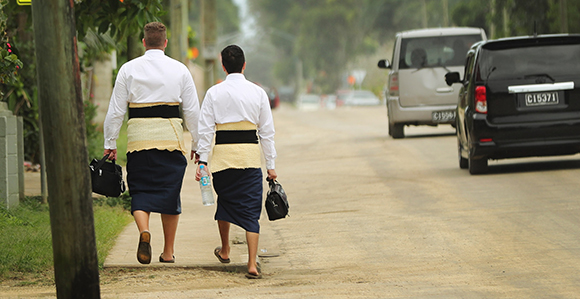 Elders Jason Andersen and Chet Norman do their missionary work in Tonga on May 22, 2019. Photo by Jeffrey D. Allred, Deseret News.

“To be an effective missionary, you must be a faithful disciple of Jesus Christ. We invite you to enlarge your talents and skills for the glory of God. Jesus Christ will magnify you.” —First Presidency and Quorum of the Twelve Apostles

The new missionary handbook of instructions is simply “a manual on becoming” and a guide to lifelong discipleship in following the Savior.

So say the pair from the Church’s Missionary Department—Elder Richard Neitzel Holzapfel, senior manager of curriculum and a Utah Area Seventy, and Lisa Mitchell, product manager—who oversaw and edited the new Missionary Standards for Disciples of Jesus Christ and its Supplemental Information companion.

“Someone asked me, ‘How is this different than the former one?’” Holzapfel said. “We’ve taken all the good principles, all the positive things, and we’ve made it a manual on ‘becoming.’”

Added Mitchell: “Although I am no longer a full-time missionary, but I know how [principles and standards] can bless me now, like studying the gospel, loyalty to a companion, safety for my children with technology—yes, I can even use some of the standards with my kids.”

The primary of the two print and digital booklets provides the principles, fundamentals, and basics—no matter if a missionary is serving in West Africa or West Virginia. The text-based supplement provides more details and specifics on subjects ranging from missionary vehicles to leadership responsibilities and from safety to physical and mental health.

For the first time, a missionary handbook leads off with a message from the First Presidency and Quorum of the Twelve Apostles.

“This now has a letter from the beginning, inviting missionaries to find joy in the work, to look for the principles. And we hope that will really make a difference,” Holzapfel said.

“As we prepared the new handbook, President Nelson asked that we emphasize joy in the work and to include more of the Savior’s words. His prophetic counsel guided us in our efforts.”

Acknowledging biblical references that the Lord speaks to men and women in their own language and own culture, Holzapfel said the new handbook communicates better with millennials and Gen Z readers.

The two drew not only from their personal missionary experiences—Holzapfel serving as a young man in the mid-1970s in northern Italy and southern Switzerland and as a mission president in the South nearly a half-dozen years ago and Mitchell as a returned missionary having served in Southern California—but from their extended interactions with today’s youth.

For Holzapfel, that includes his tenure as a Brigham Young University professor and president of a young single adult stake, and for Mitchell, being a parent of missionaries and her two-plus decades of work with the Missionary Department and at the Provo Missionary Training Center.

The missionaries of the millennial and Gen Z eras want to be obedient and faithful but also want to understand why, Holzapfel said.

“So, how can we communicate better to these generations?” he recalled asking themselves, adding, “We realized that the best thing we could do is talk about principles applicable in the mission and after the mission.”

The result, as Mitchell explained, was a focus on becoming lifelong disciples—not just of a mission but of the Savior—through learning of and living principles rather than merely following rules. 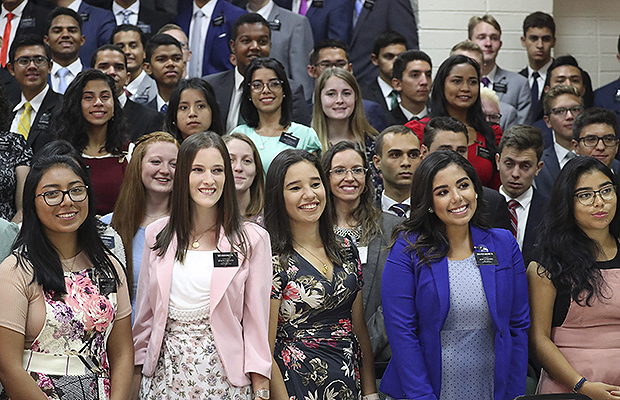 The handbook’s name—Missionary Standards for Disciples of Jesus Christ—is purposeful in helping young missionaries, Holzapfel said. “The idea is: becoming more consecrated, dedicated disciples, wherever we are on the journey. We hope the mission will help them go further with their discipleship.”

Added Mitchell, “We wanted to make sure the tone and the messaging was in that joyful, hopeful focus on the Savior and the light of the gospel.”

Holzapfel and Mitchell wanted to get away from the idea that the new handbook was a mission rulebook. “So we call it ‘standards and commandments,’” he said. “Commandments are eternal. Those are the things that I obey—before my mission, during my mission, post-mission.”

Standards adapt to the unique situation, he added, whether it be missionary safety, loyalty to a companion, or studying the scriptures. And standards have application beyond one’s mission.

The new handbooks went through a rigorous series of reviews. “We went outside the traditional channels to let other people read it, and we got really good response and really good feedback,” Holzapfel said.

“We want mission culture that permeates their lives so that whether they’re wearing a white shirt and tie and badge or not, the behaviors are the same. We think this invitation is a gentle invitation—‘Come forward, be a disciple. Look at these principles that in the long run will have the greatest impact.’” 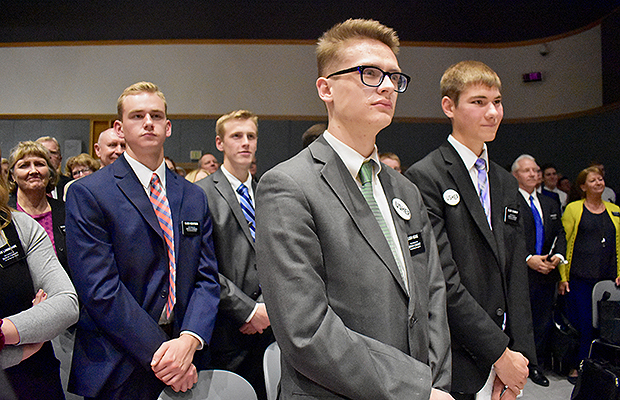 The new handbooks emphasize that motives for serving as missionaries should focus on loving God and our neighbors, the two great commandments, without concern about specific outcomes or results.

With Church leaders ever concerned about missionary safety, Holzapfel and Mitchell explained the new handbooks contain a strong emphasis and more content on how to stay safe in different situations—including dealing with harassment and understanding the need to step away from a potentially dangerous circumstance.

“This handbook gives you permission to act on your best judgment—it empowers missionaries to act,” he said.

The previous Missionary Handbook was simply a pocket-sized white booklet with black print—no art, no images, no color. Missionary Standards for Disciples of Jesus Christ features artwork of Jesus Christ on the cover and several inside pages.

“We wanted to warm it up, and we chose an artist who didn’t depict Jesus in very much detail,” said Holzapfel of artist J. Kirk Richards. The simple, detail-less, and nonspecific imagery helps project a Savior “any missionary can relate to.” 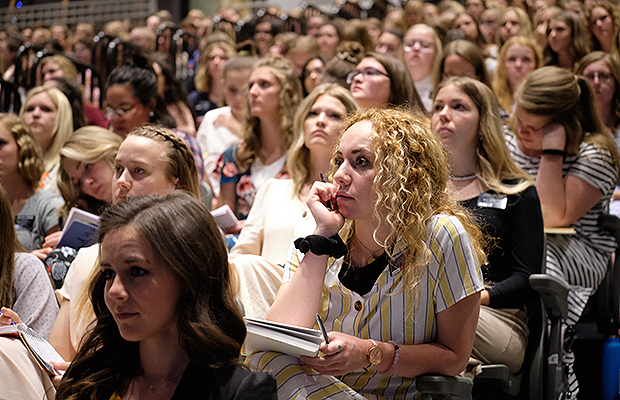 Missionaries listen to Elder Jeffrey R. Holland of the Quorum of the Twelve Apostles speak at a Sunday-evening devotional at the Provo Missionary Training Center on June 23, 2019.

Both have favorite passages from the new handbook. Mitchell’s is found in the opening message from the First Presidency and the Quorum of the Twelve Apostles.

“To be an effective missionary, you must be a faithful disciple of Jesus Christ. We invite you to enlarge your talents and skills for the glory of God. Jesus Christ will magnify you. Heavenly Father loves you, and He will help you to love and bless His children wherever you serve. He will empower you and the people you serve, through the Atonement of Jesus Christ, to be truly ‘converted unto the Lord’” (Alma 23:6).

Said Mitchell: “One of the things I felt is important is to remind us that God loves us—He wants to help us—because we sometimes get lost in the dos and don’ts. Just remember He loves you; He is aware of you; He will bless you. He is going to empower you through His Son, through the Atonement.

“You can do this,” she continued. “You don’t have to be overwhelmed. You’re not to criticize yourself all the time for your faults and weaknesses.”

Holzapfel’s favorite passage is also early in the handbook, where the manual shares “in a subtle way” commandments are one thing and standards are something else, he said, adding, “We want to be obedient to standards and commandments, but they’re not equal.”

Of the phrase “Jesus Christ is the example of perfect faithfulness,” Holzapfel said, “We chose the word ‘faithfulness.’ To me, Christ is faithful—‘He did only the Father’s will’—so we’re faithful in our desires and actions and follow Him by doing our best to keep all His commandments and live the missionary standards.

“Being faithful also means that you try to learn, grow, and improve, correct mistakes quickly, and take personal responsibility. So the idea is that I’m going to fail—I’m not going to be able to do everything perfectly. That’s all right. That’s part of the process of becoming faithful.” 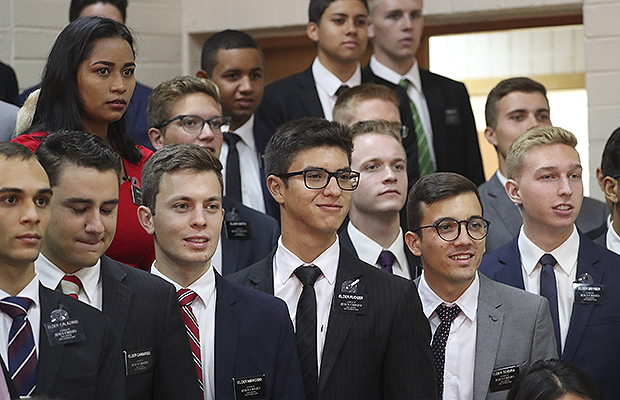 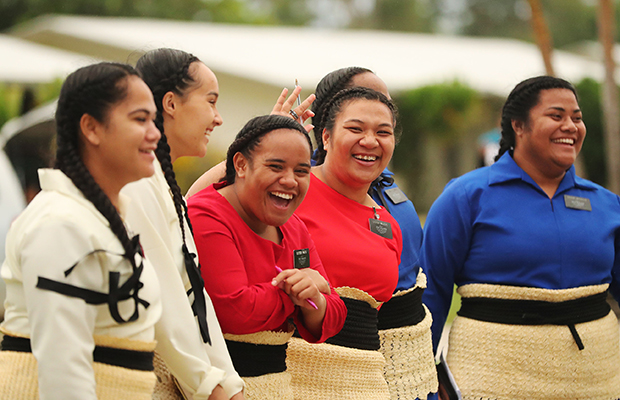 Missionaries wait for President Russell M. Nelson prior to a devotional in Tonga on May 23, 2019. Photo by Jeffrey D. Allred, Deseret News.