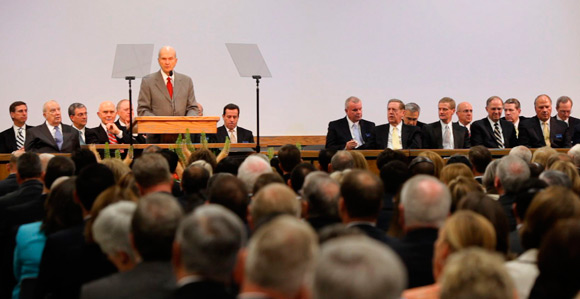 “Many times in our lives . . . we’ve said that we’ll put the Lord first and that for the Lord we’ll do anything, we’ll go anywhere. So we don’t really think in terms of sacrifice. … It’s a privilege; it’s an honor to lay down everything.” —Marcus Martins, President of the Brazil São Paulo North Mission

In June, 128 new mission presidents and their wives were invited to the Missionary Training Center in Provo, Utah, to receive instruction before leaving for their assignments.

President Thomas S. Monson opened the four-day seminar, held from June 22 to 26, 2011, saying, “You have been chosen from among the most faithful in the Church, and now you have the opportunity to go forth in the Lord’s harvest field. … I know of no field which produces more fragrant nor bounteous roses than the mission field to which you have been called.”

The couples come from all over the world—22 different countries—and will serve all over the world in 18 different languages. Their backgrounds are diverse, including businessmen in various fields, educators, lawyers, and even a test pilot for the F35 fighter program. But already they have something in common.

As these newly called mission presidents and their wives have made sacrifices to prepare temporally and spiritually, they are seeing the blessings of exercising faith almost immediately.

Serving as a mission president is both a challenging and a spiritually exhilarating three-year assignment. In dedicating themselves to this call, many couples essentially put their old lives on hold, including their jobs and family.

The calling interrupts professional employment; in some cases it means financial loss. While the Church provides mission presidents with a minimal living allowance, the couples usually have the financial means to supplement that allowance with their own funds.

When Marcus Martins and his wife, Mirian, received their calling to the Brazil São Paulo North Mission, the Laie, Hawaii, USA, residents were counseled by Elder Jeffrey R. Holland of the Quorum of the Twelve Apostles that there would have to be sacrifice, but he told them not to sacrifice too much.

The Martins went home and prayed to know how they could afford to accept this opportunity. They sold everything. “The blessing—we sold everything in one day,” Sister Martins said. “It was a miracle for us.”

Not all may sacrifice financially as they organize finances and make transitions at work, but every mission president and his wife will face faith-testing sacrifice of some kind, particularly time spent with family.

When Gary and Pamela Rasmussen from Tucson, Arizona, USA, accepted the call to the Japan Sendai Mission, they knew they would be leaving their six children and 23 grandchildren.

“I know that Heavenly Father can take care of the children better than I can,” Sister Rasmussen said. “So we’re happy to do this, and feel like this will be a great blessing to them. And we’ve seen (the blessings) already, just in the growth in the children and the grandchildren.”

When Larry Gelwix and his wife, Cathy, return from their mission to Fresno, California, USA, it will have been five years since they were home with their youngest son, Keaton, who is currently serving in the Canada Calgary Mission.

“When every missionary comes home … there’s a very tender reconnect time with your son or daughter,” President Gelwix said. “That’s not going to be our experience. We wouldn’t have it any other way, but it does tug at your heart.”

“I sometimes wonder what exactly is considered a sacrifice, because something that can be very difficult for one person may not be as difficult for another one,” President Martins said. “Many times in our lives … we’ve said that we’ll put the Lord first and that for the Lord we’ll do anything, we’ll go anywhere. So we don’t really think in terms of sacrifice. … It’s a privilege; it’s an honor to lay down everything.”

If Ye Are Prepared

In the time before mission presidents and their wives begin their mission assignments there is a lot of spiritual and temporal preparation that takes place. Mission presidents are generally called more than half a year in advance, even though they don’t find out the specific mission they will be assigned to until a few months later.

Occasionally that preparation time is compressed. Brent and Anne Scott, natives of Eden, Utah, USA, were called to supervise the Canada Toronto Mission just a week before the mission presidents’ seminar and two months before they will begin their service.

In between telling friends and family and trying to make arrangements for their home, they have been studying manuals, listening to CDs, and making other spiritual preparations. But they said their greatest preparation was the seminar at the MTC.

“It’s just a spiritual immersion of knowledge,” President Scott said. “To be with a group of people who have [sacrificed to serve the Lord] and to be taught by prophets, seers, and revelators … has absolutely been one of the greatest experiences of our lives.”

When a big box full of handbooks and manuals arrived on their doorstep just a few days after they accepted their calling, the Martins started devouring the materials. They also underwent a 10-week tutored distance training course on using Preach my Gospel: A Guide to Missionary Service, the Church’s standard curriculum for all mission presidents, full-time missionaries, and ward missionaries.

Prior to receiving the support materials the Church provides, however, many mission presidents recognize that the Lord began preparing them far in advance of their calling.

President Rasmussen learned Japanese when he served a mission to Japan from 1970 to 1972. Because of that experience some 40 years ago he is familiar with the culture, and as he studies, his memory of the language is coming back.

“We can say that we were prepared in advance for this,” said President Martins, who was a bishop in a student ward at BYU–Hawaii. “Those interactions with students and ward members were very important, because … the issues they were dealing with were in many respects similar to what missionaries in the field are dealing with.”

“There’s just a tenderness that you feel,” President Scott said, describing the feeling he’s had since the call. “You can feel your heart being softened and your spirit being prepared.”

That Ye May Learn Wisdom

The mission presidents’ seminar brings them all together to learn at the feet of apostles and prophets.

Over the four-day seminar in June, mission presidents and their wives were spiritually fed with messages from the First Presidency and several members of the Quorum of the Twelve Apostles.

“As we have listened to them, as they have taught us, [we have felt] that the Lord is there, that He cares, that this is His work, that these are His servants, and that we have the privilege of going out and representing our Savior,” Sister Scott said.

Elder Russell M. Nelson of the Quorum of the Twelve Apostles addressed those present several different times. On Friday morning he expressed some of his hopes for the outgoing mission presidents and their companions.

“May you have good physical, emotional, and spiritual health [and] success in learning, teaching, and applying the doctrine of Jesus Christ,” he said. “My hopes include your ability to harness the power of the members; to focus on the ordinances; to be one with the Lord, the members of the Church, and those precious missionaries entrusted to your care.”

Elder David A. Bednar of the Quorum of the Twelve Apostles closed Friday’s instruction by discussing five basic requirements for becoming “Preach My Gospel missionaries” in a devotional for all missionaries in addition to the mission presidents and their wives.

President Gelwix summarized what he learned from Church leaders since accepting the call: “In conjunction with saying these calls come from the Lord, the only way you can be successful is to seek counsel from the Lord and be guided by the Holy Ghost.”

Receiving the Blessings of Heaven

Mission presidents establish mission rules, outline goals, and apportion discipline. A mission president’s assignment requires travel to zone conferences quarterly. The president and his wife must maintain contact with the missionaries, whether by phone, mail, or personal visits. In general, they promote goodwill and service throughout the mission.

In addition, where there are no stakes of the Church, mission presidents may oversee a number of districts and branches, taking on responsibilities such as overseeing temple recommend interviews and Church discipline. They report on their calling and responsibilities to Church headquarters regularly.

What is the reason behind it all? “Faith,” President Scott said simply.

Elder D. Todd Christofferson of the Quorum of the Twelve Apostles described part of the miracle of missionary work. “Your own faith in Christ and the faith of your missionaries will grow wonderfully as you and they seek day by day to know and to do the will of God,” he said. “Faith, already a principle of action in you, will become also a principle of power.”

President Dieter F. Uchtdorf, Second Counselor in the First Presidency, promised those at the seminar that they would succeed as Church leaders, as missionaries, and as companionships.

“We have a testimony that all mission calls come from the Lord. That testimony has been reconfirmed and burned into our souls,” President Gelwix said. “Our faith is pretty simple. If it’s okay with Him, it’s got to be okay with us, and so it is.”