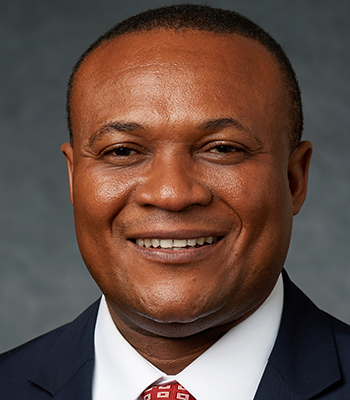 When Elder Thierry K. Mutombo was 10 years old, he witnessed the power the gospel of Jesus Christ has to change people’s lives. Before his family converted to The Church of Jesus Christ of Latter-day Saints, he felt a lack of peace and joy in his household, Elder Mutombo said.

Although his parents were both of Christian faiths, they were not active in any one religion, and they were discontented as they searched for truth.

“But when they received the restored gospel of Jesus Christ, I remember seeing the change of heart in my parents’ lives,” Elder Mutombo said, recalling how different things were before and after the missionaries found and converted them. “This was a personal testimony about the power of the gospel and the change that occurs because of the Atonement of Jesus Christ.”

Following the family’s conversion his parents’ marriage improved greatly. Elder Mutombo said he remembers his parents’ respect and love for one another increased, and their home became more peaceful and joyful. The family as a whole grew closer together as well. They began having family prayer and family home evening and would often sing hymns together. And even though they didn’t always have enough to eat, they were joyful.

The gospel had changed the path of his family, Elder Mutombo said. “I will always be grateful to my parents for their example of faith and discipleship. They were truly converted unto the Lord.”

Thierry Kasuangi Mutombo was born in Kinshasa, Democratic Republic of the Congo, on January 31, 1976, to Antoine Kasuangi Mutombo and Marie Therese Matsanga Nzambu Mutombo. Throughout his life, he has felt the call to help build up the kingdom of God. And his new calling as a General Authority Seventy is just another step along that path, he said.

Like his parents, Elder Mutombo said he hopes to leave a legacy of faith, sacrifice, and service for his children.

“This is what we expect,” he said, “to help the coming generation to find joy in the service of the Lord, to be a good example, to be a light that will help bring people to His light and the truth.”

Reflecting on how his testimony and strength in the gospel have increased over the years, Elder Mutombo recalled that although he has had a strong testimony since baptism at the age of 10, it wasn’t until he was called to serve a mission to Côte d’Ivoire as a young man that he became certain of his testimony of the Book of Mormon. Prior to receiving a mission call, he had never really read the Book of Mormon, Elder Mutombo said.

Inspired through his calling, Thierry’s bishop challenged him to read the Book of Mormon every day in preparation for leaving on his mission. He even gave Thierry a key to the local meetinghouse so he could study in the peace and quiet of the library there.

For three months, Thierry went every day to the Church building to read, ponder, and pray about the Book of Mormon. By the time he went into the mission field, not only had he developed helpful study habits but he had also gained a strong testimony of the Book of Mormon.

“That was an amazing experience,” he said. It was the first of many lessons that taught him to obey the counsel of priesthood leaders and helped strengthen his personal testimony. It also taught him the true power of the Book of Mormon.

“The greatest tool that we have to bring people to the light of the gospel and gather scattered Israel is the Book of Mormon,” he said.

When Elder Mutombo returned from his mission, he moved in with an uncle so he could be close to school. He attended the University of Cepromad and began dating, hoping to marry and start a family. But when his first relationship didn’t work out as planned, Elder Mutombo said his focus shifted.

“I said, ‘I’m not going to get married anymore,’” he said, joking about his discouragement.

A few months later, his mother began talking about a wonderful sister missionary who was serving in his family’s ward and expressed hope that one day Thierry would marry the young woman. Not having met the young woman, Elder Mutombo dismissed his mother’s comments. But it was clear the mysterious missionary, Sister Sinda, was a favorite of his mother.

Some time later, a former mission companion asked Elder Mutombo to accompany him in visiting another family. Together, the friends paid a visit to the Sinda family.

Nathalie Sinda, the young missionary his mother had favored, had been released just the day before and returned to her family home in another part of Kinshasa.

“We started talking and, wow, she was shining with the light of the Spirit,” Elder Mutombo said of meeting his future wife.

“That’s how everything started,” he said. “My mom knew she would bless my life before I did. And I’m the happiest man. I’m so grateful. I am who I am today because of her. She has helped make me a better man.”

Thierry K. Mutombo and Nathalie Tshayi Sinda were married in a civil ceremony on November 29, 2002, and were later sealed in the Johannesburg South Africa Temple on November 19, 2004. They have six children.

Although his new calling as a General Authority Seventy feels like a daunting task, Elder Mutombo said one thing he has learned is to never put a question mark to the calls that are issued through the inspired channels of the priesthood.

“I may not fully understand why I have been called,” he said, “but I know this is the Lord’s work and He knows what I do not know. He sees what I do not see.”

As Lehi taught, “All things have been done ‘in the wisdom of him who knoweth all things’ [2 Nephi 2:24],” Elder Mutombo said.

“This is about the work of salvation and exaltation. It’s not about me. But it’s an opportunity to be an instrument in the hands of God to bring my fellow brothers and sisters to the knowledge of the truth.”