New Features Kick Off Issues of the 2012 Friend Magazine 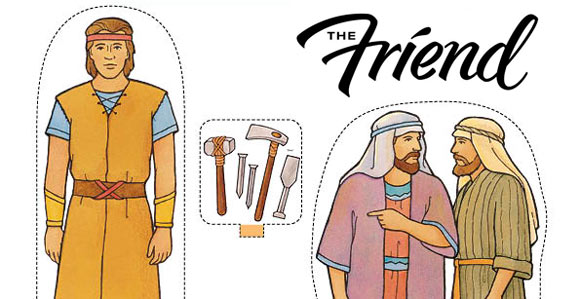 The Scripture Figures page, shown above, is a new regular feature of the 2012 Friend magazine that will help parents and teachers make scriptures more interactive for young readers.

“We hope the new features will help fortify children and make learning and sharing the gospel fun, inspiring, and interactive for them.” —Jan Pinborough, managing editor of the Friend magazine

Readers of the Friend magazine will notice new and exciting features designed to enhance scripture learning and provide music for young musicians. Other new features will cater to older children transitioning from Primary.

Jan Pinborough, managing editor of the Friend, said many of the upcoming features serve to help today’s children who “are being challenged in new ways.”

“We hope the new features will help fortify children and make learning and sharing the gospel fun, inspiring, and interactive for them,” she said.

Following are the new features that will be found in the 2012 issues of the Friend:

In 2012, 10 issues will feature Scripture Figures, a colorful page of Book of Mormon characters—such as Nephi, Captain Moroni, and Samuel the Lamanite—that correlate with lessons in the Primary 7: Book of Mormon manual that will be used in 2012.

Each “Scripture Figure” page, which will be found on the inside back cover of the magazine, will also include accessories, such as swords or Nephi’s ship. “Children, parents, and teachers can cut out the figures and glue them to paper sacks or wooden craft sticks, making it easier to bring the scriptures to life for children,” Sister Pinborough said.

Starting in February, every other issue of the Friend will include the Question Corner department, which will feature questions and answers from children on topics such as how to get along with siblings or what to do when a friend starts making wrong choices.

I Can Play It!

Each issue will feature a simplified large-note version of a favorite Primary song arranged with beginning pianists in mind. Each song will include practice tips and advice for young musicians.

Preteens—an age group sometimes called “tweens”—who are nearing the transition from Primary to Young Men or Young Women will find a new department especially for them called For Older Kids. The four-page section will include stories that focus on more mature topics such as gaining a testimony or going to the temple.

In addition to regular features in the 2012 volume of the Friend, three issues will focus on specific topics:

April — “My Gospel Standards” will focus on the 13 standards taught in Primary as part of the Faith in God program.

June — “Service” will highlight ways children around the Church are giving Christlike service and give parents and children ideas for giving service as well.

October — “Transitions,” will focus on transitioning from Primary and will feature stories about receiving the priesthood, attending Young Men and Young Women, and other related topics.

The Friend, which celebrated its 40th anniversary in 2011, is the Church’s magazine for children ages 3 to 12. The magazine regularly features short articles by the prophets, apostles, and other general leaders of the Church; stories written by children; games, puzzles, and activities; and other content for Primary-aged children.

View the magazine online free of charge or subscribe to the print edition, available in English.