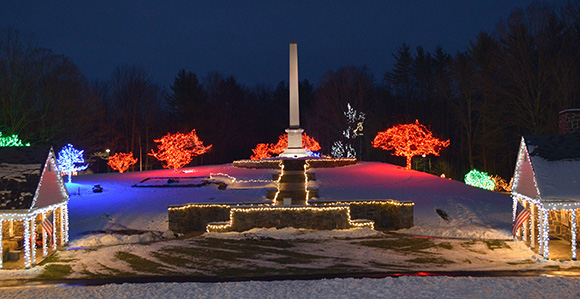 Visitors from Vermont, New Hampshire, Massachusetts, and Montreal, Canada, streamed up the hill to Joseph Smith’s birthplace in Sharon, Vermont, November 28 to see beautiful lighted trees and a nativity program with live animals. The program was presented by the Montpelier Vermont and Concord New Hampshire Stakes and was directed by Michelle Wilson.

The first two nights of the event brought an estimated 700 people to see the program and lights. After the program they were treated to doughnuts and hot cider. The lights and the animal displays are great reminders of the Christmas season—bringing the Christmas spirit and a feeling of joy to visitors. The display will be open each evening throughout December.

The Joseph Smith Birthplace Memorial is placed in the hills of Sharon, where the Prophet Joseph Smith was born on December 23, 1805. The memorial is marked by a 38½-foot-tall granite obelisk on a 12-foot base of solid granite. The Church placed the memorial on Joseph’s 100th birthday.

The obelisk itself has one foot of height for each year the Prophet lived. It is currently the tallest polished solid granite obelisk in North America.

A crowd gathers for a Christmas program held at the Joseph Smith Birthplace Memorial. Photo by Greg Osborn. 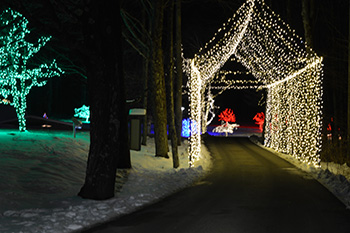 A lighted walkway adds to the seasonal scene at the Joseph Smith Birthplace Memorial in Sharon, Vermont. Photo by Greg Osborn.