Muslims and Christians Build Bridges of Unity in Georgia 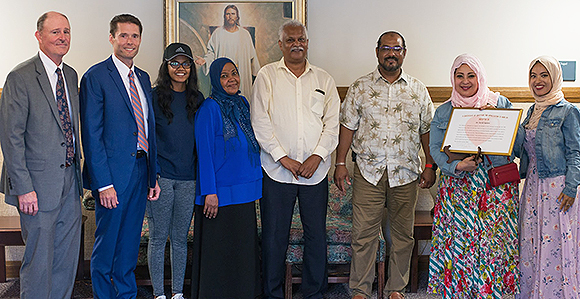 In a world where quarreling voices are growing ever louder, Muslims and members of The Church of Jesus Christ of Latter-day Saints in Augusta, Georgia, are building bridges of cooperation and support.

The friendship began several years ago and has resulted in members of the Augusta Georgia Stake hosting Ramadan dinners at the meetinghouse on North Belair Road and other family occasions for their Muslim friends. Latter-day Saint Raymond Criswell, of Harlem, has a special love and respect for his Muslim friends after spending time in the Arab world and learning their culture and language.

In describing their friendship, Criswell said, “The first and second time you celebrated Ramadan at our church, you were guests; the third time you came, it was like, no, you’re family.”

Ghada Omer Attia, a member of the Muslim community who has known Criswell for several years, added, “He’s truly like a family member; he’s a brother to us.”

Members of both communities met again recently as Ghada presented a framed letter of appreciation to David Squires, president of the Augusta Georgia Stake.

In part, the letter read: “Your genuine sustenance to our community’s religious observations and other occasions is beyond words to express. We have been treated as family and felt appreciated and for this we are highly indebted and much obliged.”

As he accepted the letter in behalf of the Church, Squires affirmed the importance of supporting one another’s religious freedoms.

“The evidence of our love and devotion to God is manifest by the way we treat each other. Regardless of our backgrounds, nationalities, or religion, God wants us to work together in unity to make the world a safe place to express our faith in God and love for our family and neighbors,” Squires said.