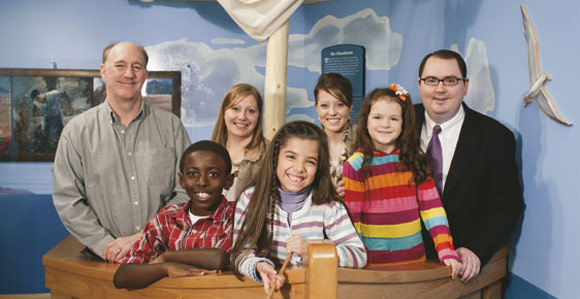 The new exhibit highlights Church history in Latin America and includes highly interactive activities like navigating Nephi’s ship, writing in reformed Egyptian, and building a temple out of fabric blocks.

“We wanted to show those three parts of your testimony of the Book of Mormon: you learn it, you share it, and you live it, and you do that as a family.” —Craig Rhode, product developer for the exhibit

A Book of Mormon Fiesta: A Latin American Celebration celebrates the rich Latin heritage within the Church and portrays stories of faithful Latin American Saints. The exhibit uses state-of-the-art technology to engage children and adults in understanding and appreciating the stories of Latin American members of the Church.

As visitors step through the tent curtains and into the museum’s new exhibit, there's a feeling of stepping into scriptural times.

“The Book of Mormon exhibit represents a higher caliber exhibit than we’ve ever done before,” said D. Kurt Graham, Church History Museum director. “It is the first step in reimagining the museum.”

The exhibit is divided into three interactive sections; it starts by reviewing the Book of Mormon story and then brings it to life with modern-day stories and hands-on activities, like dressing up in Latin American clothing and dancing.

The second section, “Share Truths,” includes an interactive replica of a Latin American home, complete with chicken coop and garden. Visitors are encouraged to share Church teachings with others.

“We wanted to show those three parts of your testimony of the Book of Mormon: you learn it, you share it, and you live it, and you do that as a family,” said Craig Rhode, product developer. “It has allowed us to bring in a lot of great stories from the Saints.”

This exhibit is free of charge and open to the public and will run through January 6, 2013.

A similar exhibit is also on display in the museum for older children and adults through June 13, 2011. In Mi Vida, Mi Historia, Latin American Latter-day Saints share their stories of conviction and belief in the gospel of Jesus Christ and collectively represent the millions of Saints who have joined the Church in Latin America.