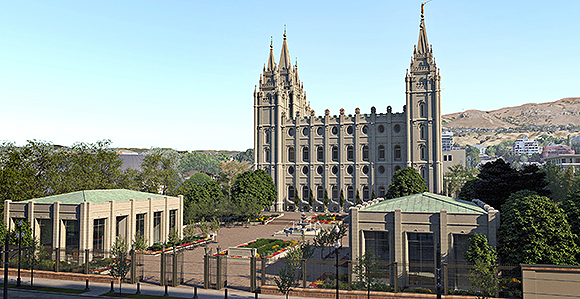 A rendering depicts the Salt Lake Temple’s south side. The temple closes December 29 for an extensive four-year renovation.

But for scores of Church engineers, designers, construction workers, and historians—along with thousands of Salt Lake–area temple patrons—the final month of 2019 also signals a historic countdown to December 29, the final day the Salt Lake Temple will be in operation.

After that, the 126-year-old temple will be closed for an expected four-year renovation project.

Visitors to Temple Square will see the first signs of the massive renovation effort almost immediately after the temple’s closure.

First, crews will border the construction area with a fence. By the middle of next month, the South Visitors’ Center and portions of the south Temple Square wall will be demolished, and workers will remove the statues, trees, and fountains on the temple’s south side.

By the spring of 2020, demolition of the temple’s north addition will commence. Renovation of the Church Office Building plaza is slated for later in the year.

Dedicated in 1893, the Salt Lake Temple remains the most iconic structure in the Church.

Last April, Church leaders announced a major, multiyear renovation that will include replacing the structure’s mechanical, electrical, and plumbing systems. Also planned is a “significant seismic upgrade” to help the edifice withstand a large earthquake. 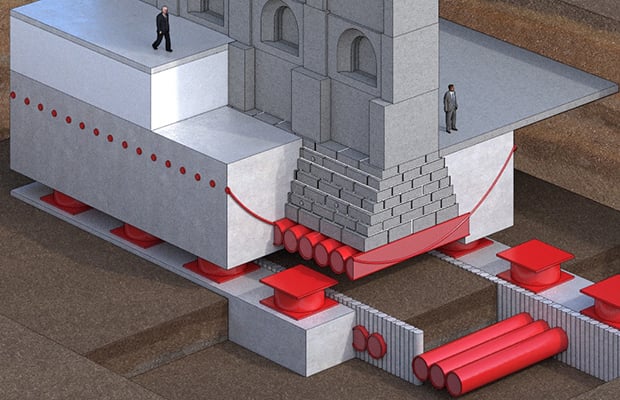 A rendering of the temple’s base isolation phase. The system is designed to protect the structure from earthquakes.

On Wednesday, December 4, the Church released artistic renderings of renovated temple interiors—including the lower grand hall, the creation room, the garden room, and the world room. 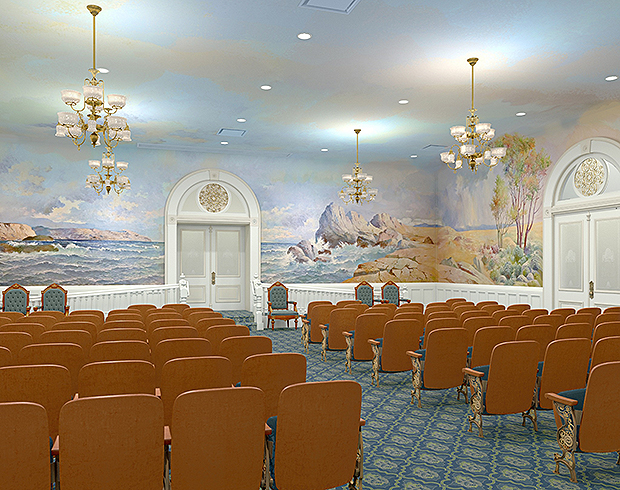 An artistic rendering of the renovated creation room in the Salt Lake Temple, released December 4, 2019.

Brent Roberts, managing director of the Church’s Special Projects Department, said renovating a building as sacred and beloved as the Salt Lake Temple is an undertaking of historic magnitude.

“We have hundreds of people working intensely upon the design and putting schedules together and working with the city and other departments of the Church for this wonderful opportunity,” he said.

Roberts is excited much of the renovation work will be on public display, creating lifelong memories for project-era visitors to Temple Square.

“We will be creating walls around the whole project with view areas and view windows where people can view our progress,” he said. The wallboards will be adorned with historical photos and artists’ renderings to enhance an expected momentous period of the Church’s temple history.

Temple Square has long been one of the most popular visitor destinations for both Utahns and people from all corners of the world.

While it’s logical to assume that the massive, multiyear temple renovation might curb crowds to Temple Square, Church officials expect just the opposite.

During the renovation “we expect to have more visitors to Temple Square than are currently coming because of the interest in seeing the temple construction,” said Tanner Kay, Temple Square guest experience manager. “It will be something that they’ve never seen before or will ever have a chance to see again.”

To accommodate expected spikes in Temple Square visitors, the Conference Center will become the primary venue for welcoming guests during the construction period.

“It will be the most convenient place to view the temple renovation,” explained Kay.

Activities at the Conference Center will also be designed to help visitors gather the facts about the renovation project while also learning about the significance of the Salt Lake Temple for Latter-day Saints.

The Tabernacle and the Assembly Hall on Temple Square will remain open during the renovation and maintain a traditional usage and schedules. Several other buildings considered part of Temple Square—the Family History Library, the Church History Museum, the Relief Society Building, and the Joseph Smith Memorial Building—will also remain open throughout the project. 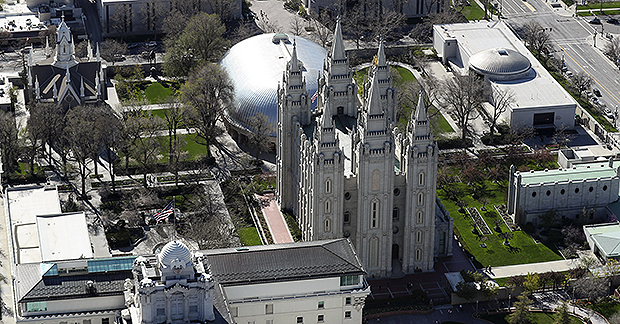 For most maiden visitors to Temple Square, their first interaction with Latter-day Saints is with on-site sister missionaries who greet guests, conduct free tours in many languages, and answer questions about the Church and temples.

About 200 sister missionaries are assigned to the Temple Square Mission.

“The Temple Square Mission will continue to function,” said Kay. “The primary impact to them will simply be that they will spend more time with guests in the Conference Center than in areas that are under construction.” 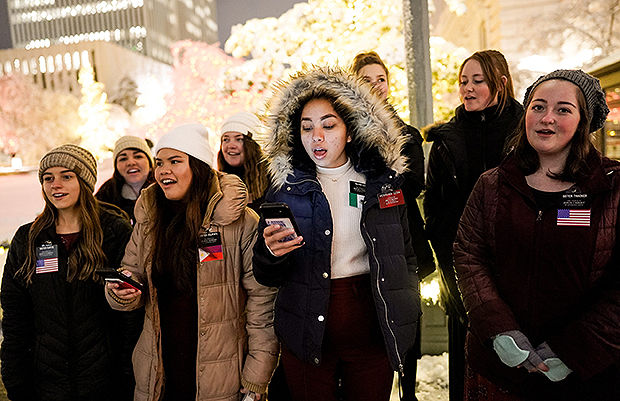 And what about the popular annual Christmas lights display?

“We are excited to continue and enhance Christmas lights on Temple Square during the renovation—although there will be areas where we won’t be able to continue with traditional displays, because they will be under renovation,” said Kay.

Meanwhile, plans are already in the works to enhance the Christmas Temple Square experience following the temple renovation. 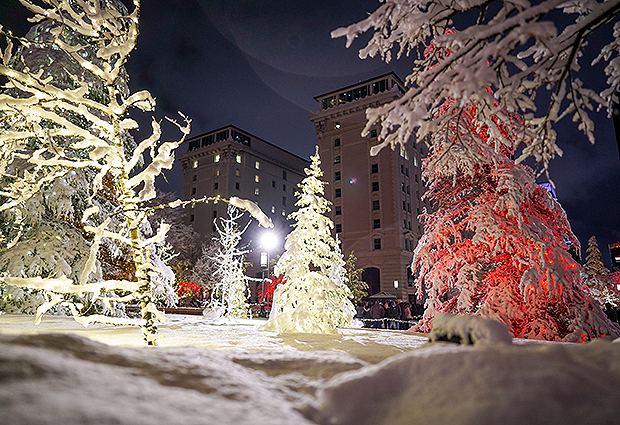 Snow-covered trees are illuminated on the first night of the annual Christmas lights display at Temple Square in Salt Lake City on Friday, November 29, 2019. Photo by Spenser Heaps, Deseret News.

“We anticipate the two temples that will probably be impacted the most will be the Jordan River Utah Temple and the Bountiful Utah Temple,” said Rich Sutton, temple area director. “We are specifically working with those temples to gear up for the increases that are coming. They are working on increasing the number of temple workers and increasing the times that they are open.”

Still, Sutton expects to see increased patron numbers in Utah temples as far north as Ogden and as far south as Payson.

Of course one of the highlights of the Salt Lake Temple project will be a public open house to be scheduled between the renovation and the future rededication of the temple.

Open-house dates have not yet been scheduled, and it’s unknown how long the open house period will last.

“But we are so excited to one day be able to open our doors to the entire world and say, ‘Come to the Salt Lake Temple,’” said Sutton. “This is the iconic, historic temple of the Church.” 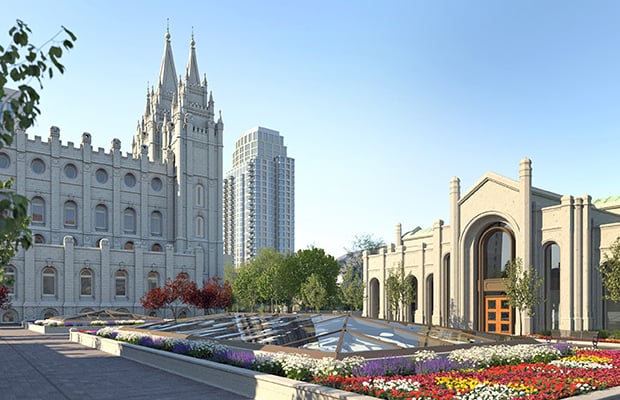 A rendering view inside the north gate of Temple Square shows the top of the skylight over the recommend desk entry.

The fast-approaching temple renovation will require the skills and know-how of hundreds of skilled craftsmen and builders. But Church history curators such as Emily Utt are also being utilized to help ensure that the building’s priceless and essential historical design and feel are not lost.

“Preserving and restoring the temple requires a combination of the newest technologies and historic construction techniques,” said Utt. “This project will highlight and honor the work of past craftsmen while making the temple safe, functional, accessible, and beautiful for future generations. Experts in preserving historic stone, murals, plaster, wood, and metal have been consulted in every stage of design and will complete much of the work required in the historic building.”

Still, patrons can expect to see a few changes from how the temple looks today.

“The first thing that will be different will be the additions on the north side of the building. We will be completely rebuilding those additions. There will be new floor plans and finishes that look more like a 19th-century building,” said Utt.

Design elements from past renovation “that don’t feel compatible” will be removed, she added.

“And we will be restoring murals to their original brilliance and installing carpets and furniture and lighting that will look and feel like a 19th-century building,” said Utt. “But we will also provide all the function that we need for a new temple.”

The historian added that the upcoming renovation doubles as a reminder of the sacredness of the Salt Lake Temple. 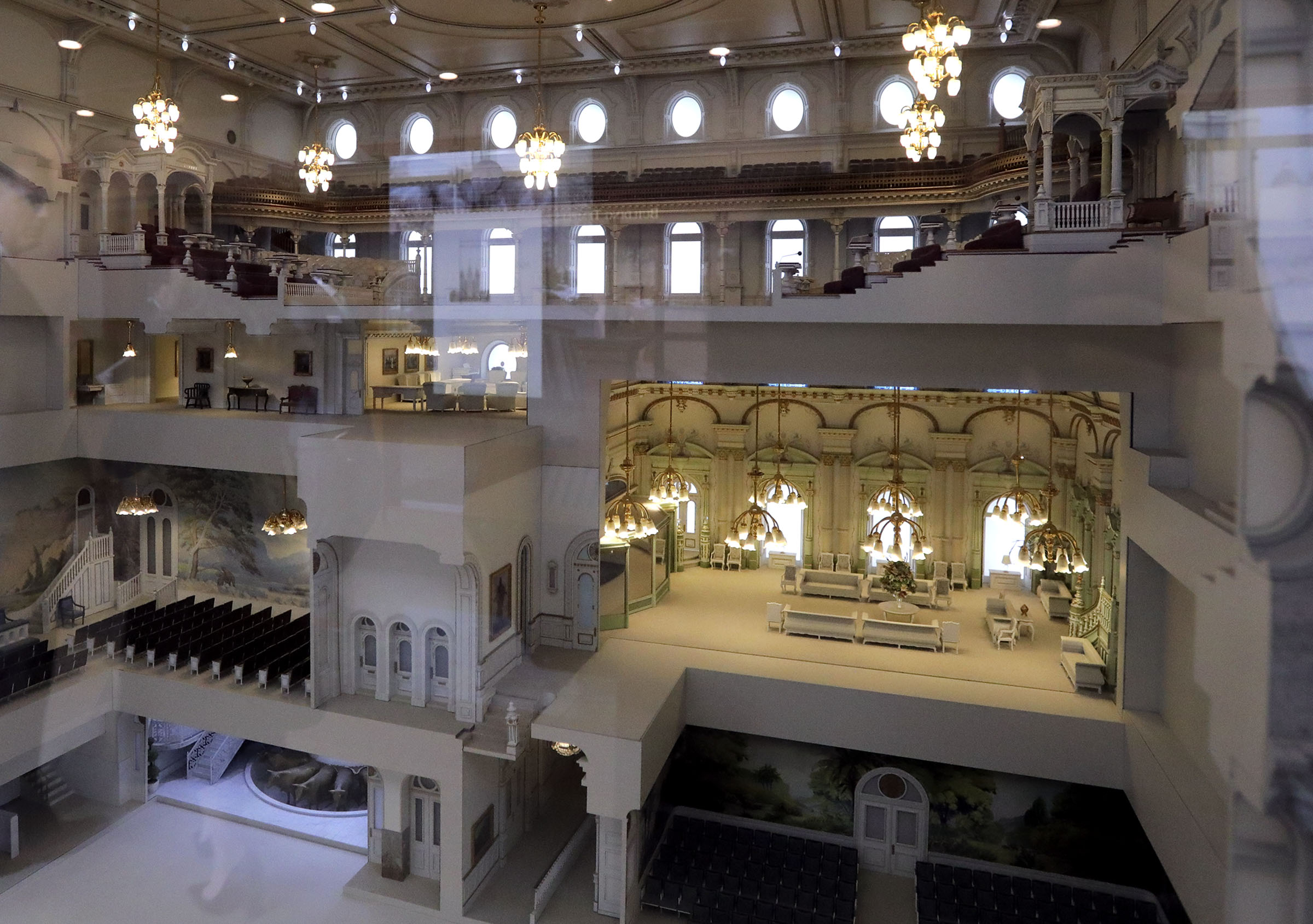 A model of the current interior of the Salt Lake Temple, which will close on December 29 for extensive renovations. Photo by Kristin Murphy, Deseret News.

Andy Kirby, the Church’s director of historic temple renovations, has been involved in a number of renovations projects on aging temples. But the work of closing, renovating, and reopening a sacred, latter-day edifice never becomes commonplace.

Devotion is found in each of the renovation details.

“The temple is the most holy and sacred space in our religious worship, and we have high standards for construction,” said Kirby. “We will also make every effort to be responsible stewards of our environment by using repurposing and recycling efforts in this construction project.” 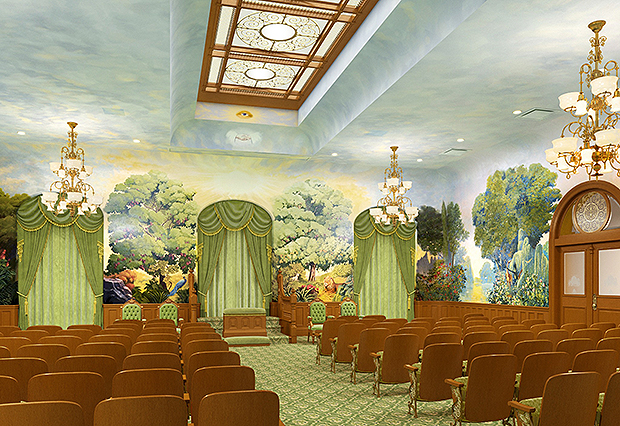 An artistic rendering of the renovated garden room in the Salt Lake Temple, released December 4, 2019.

An artistic rendering of the renovated world room in the Salt Lake Temple, released December 4, 2019. 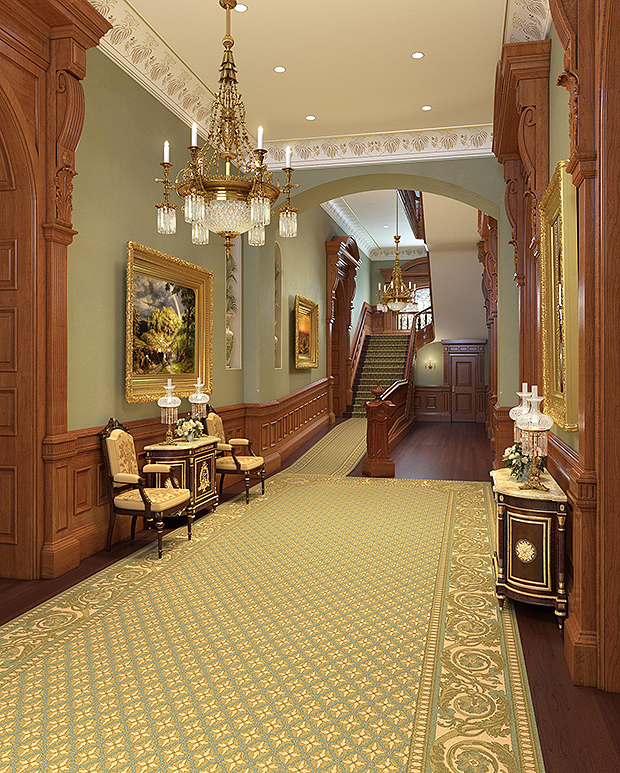 An artistic rendering of the renovated lower grand hall of the Salt Lake Temple, released December 4, 2019.