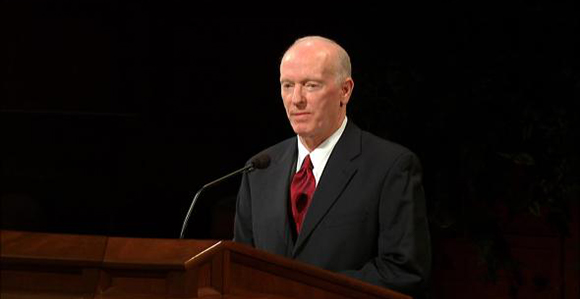 The greatest teacher in my life was my father. The great share of what I know about the gospel I learned from him. As he poured everything he had into his children, he was constantly teaching, even when he did not know he was teaching.

The dinner table was a teaching institution. Father brought to the table current events, vocabulary words, and especially the history and doctrines of the Church for discussion. For the Sunday meal we were all to remain in our Sunday clothes. Often a visitor had been invited to join us and Father wanted us to learn from him. The visitors came from all walks of life and even included university presidents and Church leaders. In more recent years one of the current members of the Twelve Apostles kindly said, “I would like to have sat around your father’s table.”

As bishop for nine years of a ward of almost 1,000 members, Father made visits to their homes almost every evening, as well as visits to administer to the ill. He frequently took one of his sons with him, for we learned to use the priesthood at his side. Each of his visits was purposeful. He was not afraid to urge families in bold tones to greater righteousness for, he said, “With a large ward I don’t know how long before I can return to this home again. If there is good to be done, it must be done tonight. Too often we spend our time only making friends with the thought that we will encourage greater righteousness another time. But the ‘another time’ never comes.”

Many of the visits were to the homes of widows, to whom he always gave something both spiritual and temporal to lift their burdens. In the words of Job, “he caused the widow’s heart to sing for joy … and the cause which he knew not he searched out.”

Father taught never to pass the beggar by. If we remarked that his donation would likely be used for alcohol, he would answer, “That is not my concern. I am only accountable for whether I passed him by.”

Father’s mission president was James E. Talmage, who never permitted missionaries to use notes or read a scripture when giving a talk. They were to be the masters of their material. All his life our father carried note cards to refresh vocabulary and scriptures he had memorized. He encouraged his children not to use notes when giving a talk or to merely think aloud at the pulpit.

Father taught us great love for literature. When he had a few minutes he would lie down before the fireplace and read. Often one of his children would lie down next to him to read, and we soon read the same books he loved. During my early teenage years I went to work with my father. We traveled by bus, 45 minutes each way, so we could read. On the bus he introduced me to Shakespeare, Lincoln, Emerson, Ingersoll, and, especially, great Church books.

When I was a student in college I took a number of classes in English, American, and Greek literature. It was my practice to write notes at the bottom of the pages I read to record my impressions. Father insisted I send him the books so that he could read what I was reading and writing.

Every week of my mission my father wrote me, usually with encouraging words he called “gold-plated platitudes.” Most letters concluded with his fatherly mandate: “Make hay while the sun shines.” As a missionary I was on the Lord’s errand, and His time was not to be wasted.

In later years Father practiced law with three of his sons. We all arrived at the law office very early each morning. Our professional work was not to commence until we had all read in the Book of Mormon. Father paced the hallway, looking into each of our offices, to assure we were immersed in the scriptures.

While traveling home from work one day Father spontaneously said, “I paid my tithing today. I wrote ‘thank you’ on the tithing check. I am so grateful to the Lord for blessing our family.” He taught both acts and attitudes of obedience.

Father passed away a number of years ago, but the lessons and the exquisite memories remain. I am proud to say, like Nephi of old, that “I believe all the words of my father.”