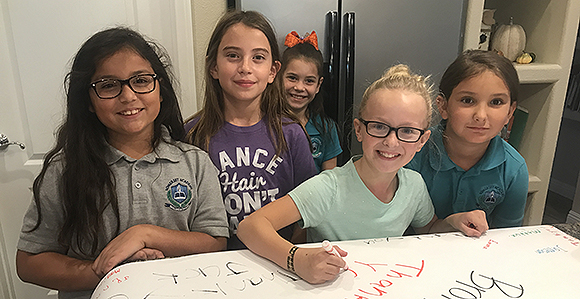 Children decorate posters for first responders and other professionals offering aid in the aftermath of Sunday’s mass shooting in Las Vegas.

“To all of those affected by the horrific events in Las Vegas, we offer our deepest condolences and heartfelt prayers. We pray for those who are mourning the loss of loved ones and for those who are seeking to recover from the physical and emotional wounds they are suffering. May God bless them with the peace and comfort only He can provide in such tragic and heartbreaking moments.” —Church statement, October 2, 2017

Latter-day Saints in the Las Vegas area recoiled in horror Sunday after learning their city had become the site of the most deadly shooting spree in U.S. history.

Their second response? Let’s get busy and help.

Just hours after the tragedy, Mormons across Nevada’s Clark County and beyond were mobilizing to do all they could to offer relief and a bit of hope to shooting victims, their families, first responders, and hospital workers.

The Church members who spoke to the Church News were hesitant to draw attention to themselves. Their ongoing efforts, they said, are simply part of a much larger, unified relief effort that’s come to define Las Vegas in the hours and days following the shooting.

“There have been so many people stepping forward to help all across Las Vegas,” said Dee Moody.

On the morning after the shooting, Moody was perusing social media and found a request for nonperishable food items at the local Ronald McDonald House. The charitable organization was delivering sack lunches to shooting victims and their loved ones at area hospitals. They needed food immediately.

One of the Relief Society sisters from her ward rushed to a nearby Sam’s Club with the donated cash and stocked up on food, filling her Suburban. A short time later, the donated goods were being unloaded at the Ronald McDonald House, ready for distribution at the hospitals.

“We have six wards in our stake, and I know each of those units were doing something,” she added.

Las Vegas resident Whitney Walker had trouble sleeping Sunday after hearing initial reports of the mass violence in her city. “I had gone to a concert on the Strip the night before with two of my children, so it really hit home.”

On Monday morning she learned there was a need for blood donations. She hustled to a blood bank operating in North Las Vegas. What she witnessed there offered a sliver of hope at an otherwise miserable moment.

“There were people lined up around buildings; they were all there just to try and save a life,” she said.

Walker is the Relief Society president of the Waterfall Ward in Las Vegas. She recognized several fellow Mormons waiting in the blood donation line that was made up of people from many racial, religious, and social backgrounds.

“There were all types of people, but we were together for the same purpose. We just wanted to try and help.”

By late afternoon Monday, the blood bank coordinators announced they had received all the blood they needed.

Several Mormons in the Las Vegas area, added Walker, are doctors, nurses, and first responders. They’ve been working long, stressful hours since the shooting. So some wards have organized efforts to take them meals or spend a few hours with their kids so mom or dad can get a few hours of sleep before heading back to work.

“Everyone’s been asking how they can help,” said Henderson resident Nanda Brock. “So some people (from a local charitable organization) reached out to our stake Relief Society leaders and told them that they needed blankets at the hospitals to give to relatives of victims.”

Moody said people living outside Nevada sometimes think of Las Vegas as sketchy place. “But it’s really been amazing to see the way people have rallied and come together in our city.” 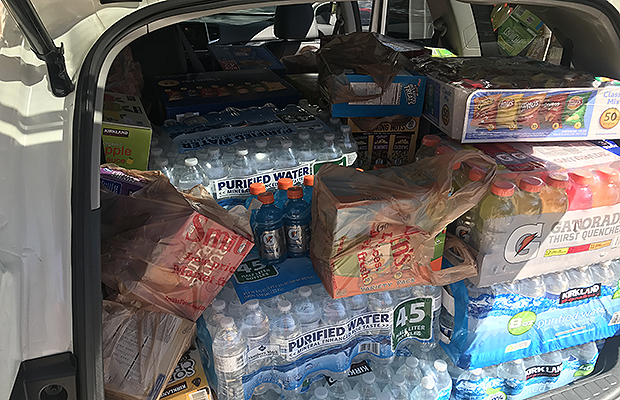 Relief Society women from a Las Vegas ward donated food to a local Ronald McDonald House to distribute to shooting victims and their families at area hospitals.