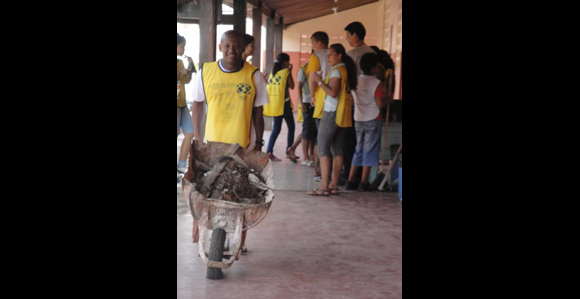 The activity, coordinated by the school board and organized by the Macapá Brazil Amapá District’s public affairs director, Kleber Sainz, drew attention and coverage from several local media outlets. In addition, the school’s director, Adelia Danin, was receptive to and assisted in the project. “We were delighted with the generous contribution [the Church] gave us,” she said. “We will always keep the memory of it with us.”

Mormon Helping Hands volunteer work is continuing throughout the Brazilian state of Amapá. These efforts exist as a way for members of the Church to improve the communities in which they live and to demonstrate that they wish to follow in the footsteps of the Savior Jesus Christ, who “went about doing good” (Acts 10:38).

“The Church in Amapá hasn’t been the same since the actions of Helping Hands began,” said Michelle Sá, who serves in Church public affairs in the district. “To see the love and devotion of families, youth, and children all united, reaching out to those who need help, is very rewarding.”

Those changes Sister Sá described are affecting missionary work too. “Through Helping Hands, people are able to associate very easily the name of the Church with the program,” said José C. F. Campos, president of the Brazil Belém Mission. “The activities are publicized by the media, so when the missionaries talk to people about the Church, the people tell them that they are already familiar with the Church because they saw on television the activities that Church members made possible.”

This, he said, generally leads people to having higher confidence in the missionaries and in their message, and that in turn has improved the image of the Church among government officials, media representatives, public and private entities, and private citizens. “The people have a positive image of us, and they gladly receive us into their homes,” President Campos said.

Mormon Helping Hands has become so well known, he added, that it has become a “trademark” of service. Latter-day Saints have become known for being able to mobilize quickly and recruit volunteers to attend to any community need.

Kleber Sainz, who serves as director of Church public affairs for the district, invited those who have not participated in Mormon Helping Hands to do so. “The feeling is very good,” he said. “Come! Feel the joy and the love. It’s wonderful. Our hearts are glad to participate and to see people happy.”