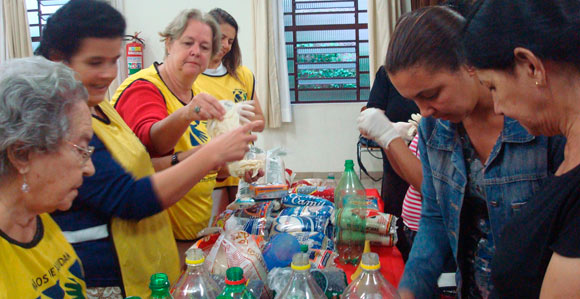 Volunteers in Brazil hoped to store 400 tons of rice during a five-month Mormon Helping Hands effort ending on July 28, 2012. As of July 27, they had stored 500 tons.

“I believe this kind of project helps us put the gospel of Jesus Christ into action and is an opportunity provided to all members of the Church to do what He would do if He were among us.”—Silvio Antonio Pizzaia of Vitória, Brazil

In an ongoing nationwide event spanning five months of dedicated work, some 130,000 volunteers in Brazil have been working together on a Mormon Helping Hands project to store and donate a goal of 400 tons of rice and beans to benefit people in more than 150 cities.

While the purpose of the project was to collect food and teach communities how to preserve and store food on their own, participating members of the Church of Jesus Christ of Latter-day Saints found that the service also helped them live their beliefs and become more like the Savior.

“I believe this kind of project helps us put the gospel of Jesus Christ into action and is an opportunity provided to all members of the Church to do what He would do if He were among us,” Silvio Antonio Pizzaia of Vitória, Brazil, said.

Elder Claudio R. M. Costa of Seventy, President of the Brazil Area, noted that Helping Hands in Brazil is nationally recognized as a great service organization.

“The Church is recognized as a Christian church, and the members are very good Christians,” he said. “I’m sure that we will have a very special national day of service donating rice and beans to people in need.”

Members of all ages in all 26 Brazilian states have been gathering in their local meetinghouses since March to hold and participate in workshops on food storage and provident living. Donations in some locations were not limited to food items, but also included clothing.

“This type of service gives members the opportunity to help others,” Murilo Vicente of Goiânia, Brazil, said. “In addition, members are encouraged to follow the counsel of the prophets regarding food storage and provident living. The opportunity to participate in the workshops, inviting the neighbors to the chapel, and contacting the community gives us the opportunity to show who we really are—disciples of Christ.”

All items donated and stored will be given to institutions such as nursing homes, schools, hospitals, impoverished communities, and orphanages.

Brother Vicente noted that participating in service to those less fortunate is not only a way to serve the Lord, but also is a way to develop love for His children. “The development of love is a fundamental aspect of the program,” he said.

At the conclusion of the project, various storage workshops will be held in all state capitals and hundreds of other cities simultaneously, where communities will continue to be taught simple techniques of food preservation using garlic and plastic bottles. Not only will this effort help promote self-sufficiency, it will also put 200,000 bottles into reuse, preventing them from being thrown into landfills.

Brother Júlio César B. Souza of Salvador, Brazil, said that living the gospel requires sacrifices and service for others. “When we give our time, our knowledge, our food, and our testimonies, not only are we striving to live according to our beliefs, but most of all, we qualify to be instruments in the hands of the Lord.”