Mormon Helping Hands Groups around the World Praised for Efforts

Contributed By By Carolyn Carter, Church News and Events 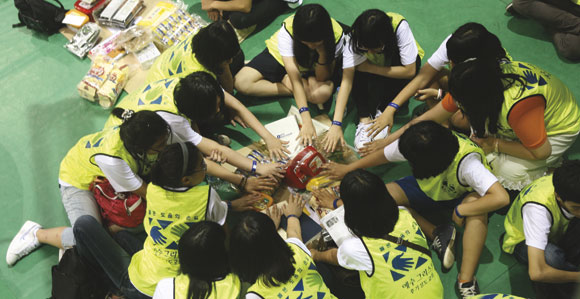 As people around the world become more familiar with its bright yellow vests, Mormon Helping Hands is receiving recognition for its ability to strengthen communities and build relationships among people of all backgrounds.

On March 8, 2011, more than a million dead sardines floated to the surface of the King Harbor Marina along Redondo Beach, California, USA. Critically low oxygen levels in the marina water left an 18-inch-thick (45 cm) blanket of them across the marina’s surface.

And the fish began to stink.

That’s when Loretta Collins, Torrance California North Stake director of public affairs, received an e-mail from the Community Emergency Response Team, requesting Mormon Helping Hands’ assistance in cleaning up the marina. The community organization was familiar with the priesthood-directed Church program that provides community service and disaster relief to those in need because of Mormon Helping Hands’ past involvement in service projects in Redondo Beach.

Upon receiving the team’s request, Sister Collins e-mailed stake members, who soon gathered for the cleanup.

Larry Westover, one of the volunteers that day, remarked, “The Church of Jesus Christ of Latter-day Saints has a reputation for being among the first responders after a disaster hits.”

Redondo Beach’s local government has noticed the same thing. In fact, last year the city of Redondo Beach presented Helping Hands volunteers with a mayor’s commendation for their community efforts and formally thanked them in a city council meeting.

In addition to these formal recognitions and perhaps even more complimentary, the government has begun approaching the stake’s Helping Hands volunteers about assisting with other community projects. The Helping Hands volunteers have painted city buildings and cleaned up beaches, and with each project they prove their reliability and enthusiasm in serving the community.

The Helping Hands volunteers in California are not alone. Governments around the world are taking notice of the good work Mormon Helping Hands is doing and are reaching out with official commendations, formal statements of appreciation, and requests for even more help.

In May 2012, the City of Zamboanga, Philippines, issued a resolution commending Mormon Helping Hands volunteers from the Zamboanga Philippines Stake for their voluntary service in the cleanup of Cawa-Cawa Beach on April 28, 2012.

Following a 2011 “Motion of Praise” for the Church’s humanitarian projects in Amapá, Brazil, the state legislature established April 6 as “The Church of Jesus Christ of Latter-day Saints Day” and July 30 as “Helping Hands Day.”

In June 2012, the Spanish Federation of Blood Donors awarded Mormon Helping Hands the National Merit in Blood Donation for collecting 2,200 units of blood from donors across Spain.

Projects like these exemplify the mission of Mormon Helping Hands—to serve the community while building relationships with opinion leaders, strengthening Church members, enhancing the reputation of the Church, and sharing the gospel indirectly.

Enhancing the Reputation of the Church

Mormon Helping Hands volunteers in Denmark are also developing a reputation for service. In 2010 the mayor of Randers, Denmark, publicly extended a thank you for Helping Hands’ volunteer work in the community. Then, in June 2012, when arrangements with another volunteer organization fell through, the Gladsaxe municipality called upon Helping Hands organizers in the Copenhagen Denmark Stake to help organize a breakfast for 250 canoe and kayak rowers who were competing in the world championship at Bagsvaerd Lake. Mette Paulsen, who serves on the public affairs committee of the Copenhagen stake, commented, “Isn’t it cool that Mormon Helping Hands is now a known brand within the municipality? They come to us now instead of the other way around.”

As a result of the service that Helping Hands has given the community, the city council invited Campo Grande Brazil Stake president Cezar Henrique Bagatoli to speak in their formal chamber session. Following his speech, city councilors honored the Church for its service. Councilman Mario Cesar thanked the Church for the work its members have done and emphasized that the organization, seriousness, and love shown by Mormon Helping Hands is an example to be followed by other sectors of society.

“We are helping to give the Church and its members a bit more visibility in the local community as well as providing some valuable help,” Susan Bleach of the Coventry stake remarked. “Councilor Kinson could not have been more enthusiastic about our offer to help and, according to all sources, has been telling everyone about us. … It is good progress and the beginning of a new relationship to nurture this year. He hasn’t stopped thanking us.”

When Saints in the Angeles Philippines Stake participated in the Angeles City Task Force’s One Million Trees planting project, they found that not only were Helping Hands projects opportunities to serve the community and connect with local government officials, but also that the projects served the volunteers as well. Stake president Jose Briones commented that the service projects “[made] members realize the need to help nature recover by planting trees [and] cleaning waterways of plastic and other nonbiodegradable materials. … Cleaning, greening, and sustaining these service projects will [contribute] to the community having a cleaner environment.”

In addition to these temporal returns, volunteers are finding deep spiritual rewards for their dedicated service. “When I serve others, the reward and satisfaction of service is immediate,” Brother Westover said after the marina cleanup. He concluded that the sense of well-being he gets from serving is the reward for his work. “I have an immediate sense that my time and effort was worthwhile, and I feel good about myself,” he said.

The cooperation engendered by humanitarian service often becomes a means for sharing the gospel.  When the millions of fish showed up dead in Redondo Beach, officials initially feared the fish die-off would have an impact far into the future. But, Brother Westover remarked, thanks to the work of the members and other community volunteers, “the reality was that about five days of volunteer work and nature got the job done. Everything was beautiful and back to normal within two weeks.”

As Helping Hands volunteers cooperated with community members and city officials to accomplish such a great task, they opened the door for sharing the gospel. Brother Westover noted that the service that Mormon Helping Hands volunteers offer communities isn’t about proselyting. “We ask if we can serve,” he said, “[and] the repeated service seems to change hearts and allow honest and open conversations on spiritual matters.”