“Mormon Goal Scorer” Keeps Finding the Back of the Net 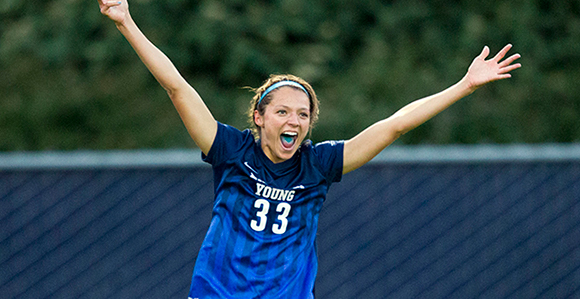 “I felt so much peace going into the draft because I knew that wherever I went, the Church would be there for me.” —Ashley Hatch, LDS soccer player for the North Carolina Courage

Latter-day Saint athlete Ashley Hatch had every reason to feel nervous last January when she was the second player picked in the 2017 National Women’s Soccer League College Draft.

Almost everything in her life was about to change.

For four years Hatch had called Brigham Young University home. Both the school classrooms and the Cougar locker room were filled with fellow Mormons who shared her religious beliefs and goals.

Plus, Provo was fairly close to her Gilbert, Arizona, home. So her family made frequent treks to Utah County to watch Ashley and her younger sister, Brianna, play for the Church-owned school.

Now she would be moving to the Atlantic Coast to play for the North Carolina Courage. Her family and best friends would be thousands of miles away. And she’d no longer be a student athlete at a predominately Mormon school. She was now a professional. Soccer was her job and she’d be competing alongside some of the world’s best players.

But she faced the upcoming changes like she faces ornery goalkeepers: cool and composed.

“I felt so much peace going into the draft because I knew that wherever I went, the Church would be there for me,” she told the Church News.

What the humble striker (an oxymoron, soccer fans?) won’t say is that her mad goal-scoring skills are also proven remedies for nerves. Hatch has worked her way into her team’s playing rotation and become one of the best stories of the NWSL season. Her four scores place her on the league’s top-10 goal list that includes international stars such as Brazil’s Marta, Canada’s Christine Sinclair, and American Megan Rapinoe.

“It’s been quite the roller coaster ride—but it’s been so much fun,” said Hatch. “It’s been great playing on an amazing team with amazing coaches and teammates.”

The lifelong member is a natural goal scorer. She started all four years at BYU, where she claimed 47 goals, recorded 21 assists, and earned All America honors. But at the beginning of her rookie pro season she was entering games at the tail end of matches. Scoring opportunities were few.

“So I told myself that if I’m only going to play five minutes, I’m going to live for those five minutes. That was my challenge,” she said.

She trained hard, competed in practice, and waited for her opportunity. She made her first start on June 3 against FC Kansas City and, in Hatch-like fashion, put a ball in the back of the net.

“My first pro goal was one I will never forget,” she said.

More memories were made days later. On June 12, she pulled on a red-white-and-blue jersey and recorded her first international goal, scoring for the U.S. Under-23 Women’s National Team in a win against host Sweden.

She hopes that strike will be the first of many for Team USA. She made her debut with the senior national side last October in front of family and plenty of Cougar fans at Salt Lake City’s Rio Tinto Stadium.

Hatch said her new Courage teammates have been supportive of their “Mormon goal-scorer.”

“They know I’m a member of the Church, and they respect my values and lifestyle, which has been so cool.”

She misses her friends and old teammates at BYU, and she doesn’t get to see her parents, Barry and Anne Marie, and her siblings as often as she would like. But she has settled into her local YSA ward and enjoys seeing her new LDS friends at Courage games.

The life-changing experiences of the past few months, she added, “have really helped develop my testimony.”

For now, she’s enjoying her moment and scoring goals. She doesn’t spend much energy wondering about her long-term soccer career.

“I just love going to work every day.” 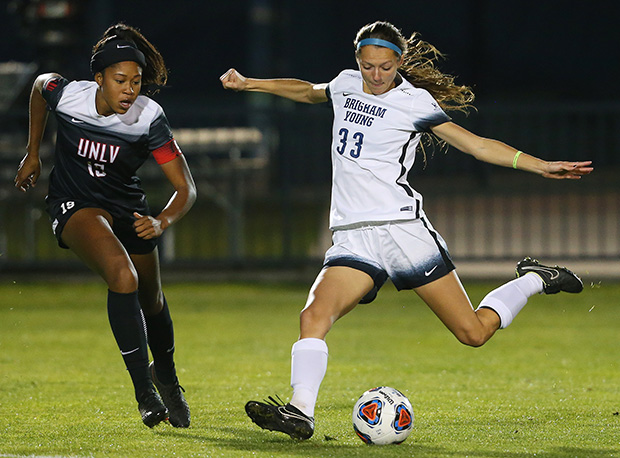 BYU’s Ashley Hatch (33) kicks the ball past UNLV Chidera Akubuilo (19) as BYU and UNLV play in the first round of the NCAA tournament in Provo on Friday, November 11, 2016. Photo by Scott G Winterton, Deseret News. 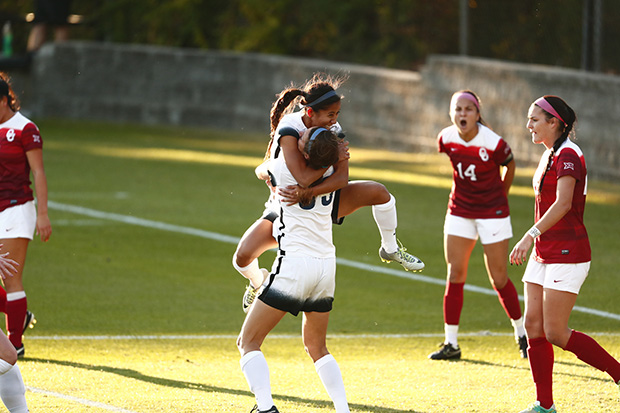 Ashley Hatch gets a celebratory hug after scoring in the first half against Oklahoma Thursday, November 17, 2016, during the NCAA tournament in South Carolina. Photo by Jaren Wilkey, BYU Photo.