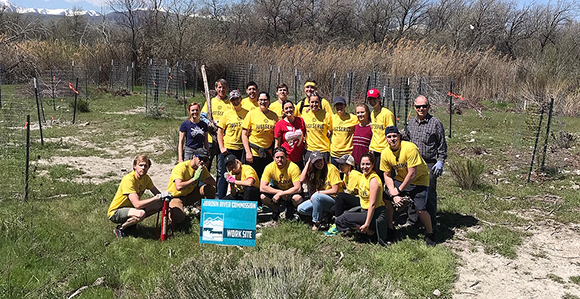 “We hope everyone will visit JustServe.org and search for ways to serve their communities.” —Marc Amicone, Salt Lake Bees representative

More than 800 volunteers and baseball fans in the Salt Lake Valley gathered on April 27 to complete major JustServe projects in Salt Lake and Davis counties in Utah.

JustServe, the initiative sponsored by The Church of Jesus Christ of Latter-day Saints, partnered with the Salt Lake Bees baseball team and several cities and other organizations for the day of service followed by a game at Franklin Covey Field, which the team dubbed “JustServe night at the Bees.”

For their contributions, each participant received a T-shirt and ticket to the baseball game that night.

The service projects were posted on justserve.org and attracted more than 800 volunteers. There were five major projects—some offering work at more than one site—and Salt Lake Bees players worked alongside community participants throughout the day.

The community responded with enthusiasm to the opportunities, and sponsors were excited at the large turnout.

Nolan Karras, a JustServe area specialist, attended the Farmington Woodland Park project. He and the hostess, a ward Relief Society president from Farmington, Utah, arrived a little before 8 a.m. and, along with city workers, were, initially, the only ones at the site. At 7:55 a.m. a car pulled in with one volunteer. They wondered if no one else would come and were worried because the city had provided loaders, dump trucks, and personnel to assist. However, by 8 a.m. people started streaming in and volunteers kept coming until 9:30 a.m.

“It was heartening to see the response,” Karras said. “The yellow shirts were everywhere on the trail.”

City workers expressed their appreciation and admiration for the number of volunteers. “Two hundred volunteers swarming over a site is quite a scene,” said Karras.

Steve Facer, a JustServe specialist for the Bountiful coordinating council, helped to organize and direct the service efforts in that area. “The Bountiful downtown site was packed,” he said. “Overall, there were over 200 volunteers that included families, missionaries, senior couples, and Beehive groups from local wards. One group participated as part of Earth Day celebrations.”

Other volunteers included members of the South Davis Mountain Bike team. “The members rode their bikes to the North Canyon trail and then worked together to clean,” Facer said. “One of the Bees pitchers also helped in Bountiful and willingly autographed T-shirts for the participants working around him.”

Another group of volunteers was a busload of international citizens, who had come to Utah as part of a government citizen diplomacy trip. When they heard about the event, they were excited to participate in a community service experience.

JustServe specialists, partners, and volunteers were honored at the Bees game that evening, which ended up being two games due to a rain out the night before. And JustServe set up a table at the game to promote service and the work that had been completed earlier in the day.

Karras reported that one fan from the community asked whether the resource website was reserved only for members of the Church.

“I assured her it was a community site available to all. And she then indicated her 15 year-old needed to learn to serve, and she was excited about using the site for both of them,” she said.

Marc Amicone, a representative from the Salt Lake Bees, said he felt the event was so successful they hope to do it again in the near future. “The Salt Lake Bees are grateful for the opportunity our organization and some of our players had to participate in the JustServe projects,“ Amicone said. ”The feedback we received from our players was extremely positive. They enjoyed getting out into our community and seeing more of the area, especially those who are new to the team.”

One of the players, Jose Rojas, volunteered at the Jordan River Parkway site and actually met a person from Venezuela who had seen Jose play winter ball in Venezuela.

“One of the kids in that group asked Jose to hit a home run for them that night, and he promptly did so,” said Amicone.

Amicone noticed the crowd at the game was full of yellow shirts “which I thought showed how well received it was in the community and how excited the volunteers were to attend the game,” he said. “We hope everyone will visit JustServe.org and search for ways to serve their communities. The Bees look forward to being able to serve again.”

JustServe organizers are looking at the event as a model other sports franchises can use. They said they hope to expand it to additional Utah teams and organize similar partnerships in cities nationwide.

Randy Rigby, a JustServe specialist and event organizer, summed up the total experience: “It was such a great experience to use JustServe as a vehicle to bring city and civic organizations, community minded corporate sponsors, and hard working volunteers together to really make a difference in the community and then have some fun together at the Bees game. There were so many ingredients we were able to mix together to make this big service cake. You worry how it will turn out, but in the end it was delicious and a real home run.” 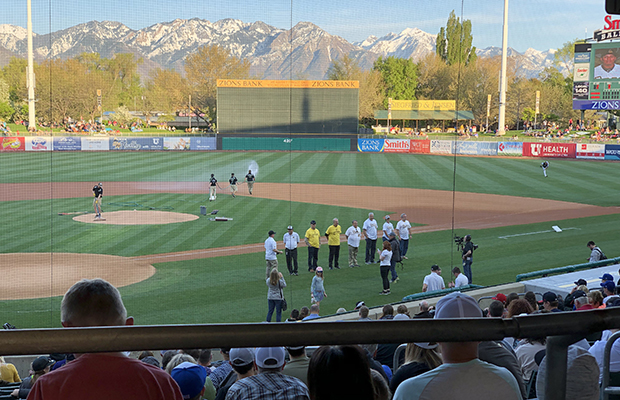 JustServe and volunteers are honored at the Salt Lake Bees game on April 27. Photo by Randy Rigby. 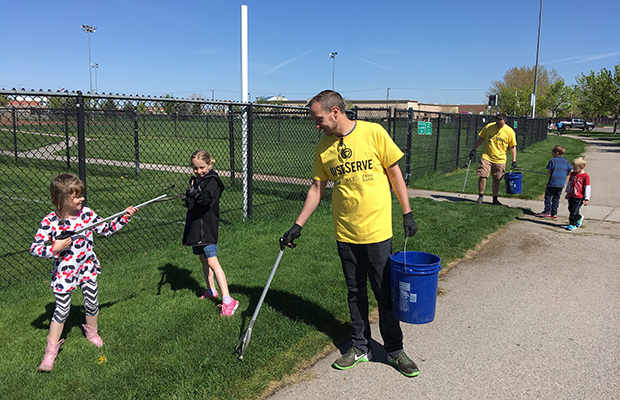 A group of volunteers pose for a photo at one of the service worksites as part of the Salt Lake Bees/JustServe day of service on April 27. Photo by Randy Rigby. 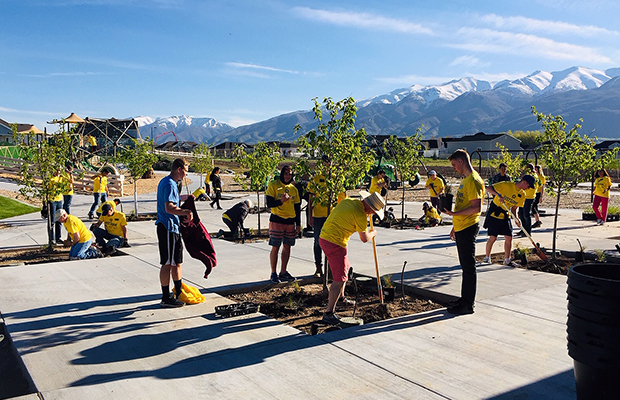 JustServe volunteers plant trees at a park in the city of Kaysville as part of the Salt Lake Bees/JustServe day of service. Photo by Randy Rigby. 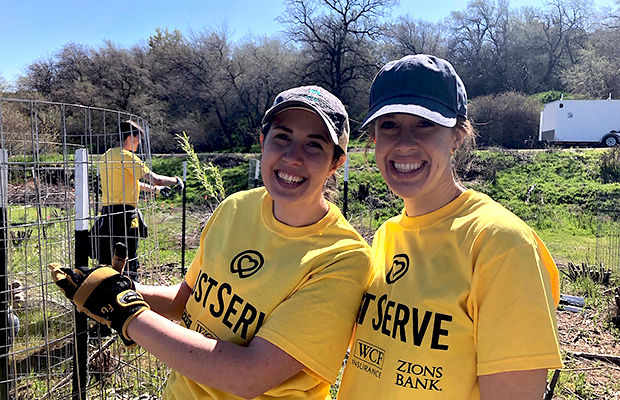 JustServe volunteers gather to help serve the Salt Lake community as part of the Salt Lake Bees/JustServe day of service on April 27. Photo by Dave Buhler. 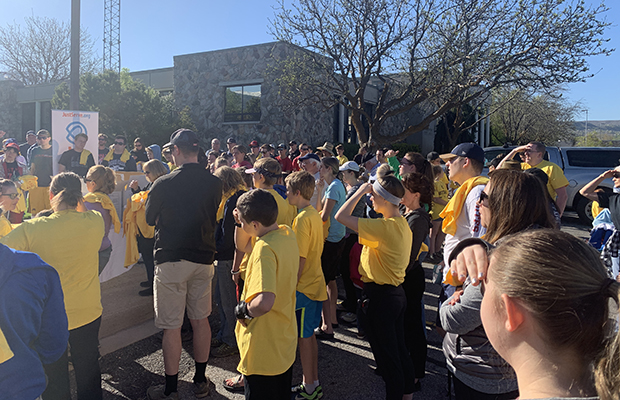 A large group of volunteers listen as assignments are made for work projects as part of the Salt Lake Bees/JustServe day of service on April 27. Photo by Randy Rigby.